Landmines in the Gardens of the Literati

I have been thinking about the ways in which contemporary artists in China continue to use and be informed by the traditional forms of ink painting such as the continuing references to Shan Shui (mountain / water) painting which seem to be everywhere right now, and by the scholarly traditions of calligraphy. Sometimes in obvious ways, sometimes subtle. Sometimes overt, sometimes nuanced. Sometimes in order to pay homage to the long history of the Chinese prior to the humiliations visited upon them by western powers in the 19th century and the chaos of the revolutionary period. Sometimes to combine that respect for tradition with a wry or downright satirical view of the contemporary world. But always there is this looking back - at times almost wistfully - to a time before the landscape was covered in advertising hoardings for mobile phones and fast food. This may be perverse - after all ordinary Chinese citizens enjoy a measure of moderate prosperity now that was unimaginable thirty years ago, let alone in the distant past when those who passed the imperial examinations became scholar officials, and developed their passion for painting and calligraphy. But nevertheless it is a consistent feature of so much contemporary art being made in China today that it clearly reveals something of significance about the 'zeitgeist' (whatever the Chinese term for that may be! Google Translate provides this: 時代精神 - someone might tell me if this is even remotely accurate.) And not just in the PRC, but in Taiwan and Hong Kong too. Past and present - always layered in rich and sometimes surprising ways.

In Hong Kong artists such as Lam Tung-pang revere the traditions of the Chinese ink painting masters, and refer to them constantly. Lam spends long hours in the Hong Kong Heritage Museum working from their collection, however the historical images are transformed to become works in a new idiom in his own unique medium of charcoal and acrylic on plywood. Lam uses the themes of landscape to reflect on what is happening to his beloved homeland. Wong Chung-yu, likewise, admires the tradition of ink painting and some years ago he decided to reinvent it using his skills as a computer programmer. His works often involve the audience and use real-time video.
In Wong Chung-yu's ‘When Time Flows Away’, two screens are hung one above the other. On the top screen a traditional ink grinding stick is activated when an audience member takes a ladle of water and pours it into the vessel below the screen. A computer program designed to calculate the effect of ink infiltration then interacts with the water in real time. Virtual ink begins to flow downward into the second screen, ‘washing away’ images from the last 100 years of Chinese history, including the Japanese occupation, Mao Zedong, Cultural Revolution propaganda, Deng Xiaoping and images of the 1997 handover. The ink grinding represents China and the ebb and flow of its history, and the work involves the audience in its alteration. Wong believes that ink painting expresses the deepest beliefs and philosophies of the Chinese people: “What I am interested in is how to reinterpret Chinese traditional art in a new way,” he says.

In Shanghai, Yang Yongliang also works with video and digital media, creating works which initially appear to be tranquil Shan Shui paintings, until you realise that everything in the misty landscape is in motion - the mountains are made up of towering skyscrapers, cranes reach their arms into the air, cars travel on Jetsons-style freeways and planes criss-cross the sky. These works are very disconcerting - beauty juxtaposed with the uncertainty of modern life. In China the only certainty is change and these works certainly reflect that.

It is in Shanghai, too, that Shi Zhiying experiments with the removal of colour from her vast canvases depicting oceans, expanses of grass, the raked spirals of Zen Gardens, as well as the humble objects of everyday life. In Shi's case, there is a specific reference to Buddhist belief.
Some might attribute the continued focus on ink painting and Confucian or scholarly tradition as an aspect of Chinese nationalism, with all the implications and complications that suggests. Others see it as a welcome reversal after 30 years of Maoist policies of 'Smashing the Four Olds' and breaking with tradition (literally, in so many instances of the destruction of artworks, artifacts and buildings.)  Some, like artist Jin Sha, a painter of 'contemporary gongbi' works, see ink painting as a later version of Chinese culture which is not truly Chinese at all! Like everything else in China, it is complicated, contested and open to multiple interpretation.

So thinking all these thoughts about the enduring nature of - and in fact the increasing interest in - Chinese traditions, I wrote an article for a new web site peek365.com/ about how this plays out in the work of Monika Lin, a painter and performance artist based in Shanghai, whom I met first in April 2011 and again in December 2012; and the photographer/painter/sculptor Huang Xu and his very interesting and somewhat enigmatic wife, Dai Dandan, whom I interviewed in their Beijing studio.

Here is an extract:

Monika Lin is an American-born artist of Swiss and Chinese heritage, living and working in Shanghai, who focuses on socio-political and historical issues in her paintings and performance works. Lin is simultaneously part of the Chinese world and also, by virtue of her ‘foreign-ness’, separated from it. She views contemporary China with a clear and critical eye and in the performance ‘Ten Thousand’, presented last year at the Performance Art Institute in San Francisco, she reflected on Chinese history. In Imperial China, scholars who passed the Imperial Examinations were appointed to administrative positions overseeing populations ranging from small villages to entire provinces. Many of these scholarly civil servants – the literati – devoted themselves thereafter to the practices of the fine arts. An uncomfortable truth often overlooked, Lin says, is that their privileged life of contemplation depended on the work of innumerable peasants.

For the performance, Lin decided she would write the character for ‘rice’ – 米 – 10,000 times. Ten thousand as a numerical denomination (‘yi wan’) is unique to the Chinese language and signifies ideas about eternity and infinity. Lin chose the character for rice in part for its beauty and simplicity but also for its ironic resonance: rice was produced by peasant farmers who were taxed on it, but could not afford to eat it. Lin wanted to work in a physical way to connect herself to the labours of the peasantry rather than the literati. Influenced by endurance-based performances by artists such as Marina Abramovic and Kiki Smith, the result was 833 sheets of paper. The act of placing each sheet down on the gallery floor was so physically challenging that it appeared to some observers akin to the act of planting rice.
The American audience perceived Lin’s silent enactment of the act of calligraphy, an act that she describes as unspeakably arduous and emotionally powerful, as ‘beautiful and tranquil’. Lin told me that she saw this as an orientalist interpretation of her work, a misreading of her intentions. It was the backbreaking physical labour of the peasants, which made possible the countless hours (represented by the symbolic number 10,000, or万) that the literati were able to spend contemplating nature in their gardens, perfecting their calligraphy and painting. Is there a resonance here with the position of artists as privileged elite? Lin suggests, perhaps, that the contemporary artist, like the scholar in his garden, is seeing a convenient constructed version of the ‘natural’ world. She is wary of romanticising Chinese history, of falling into the kind of Chinoiserie that westerners living in China can fall prey to. Lin’s other works have dealt with the oppression of women in Imperial China, the ‘lotus feet’ resulting from foot-binding, and the ‘flower houses’ or brothels in Shanghai.
In Beijing, photographer Huang Xu often represents ‘scholar rocks’, traditional subjects for Chinese painting for their natural perfect forms that echo Taoist philosophy. However Huang’s rocks are photographs of decaying plastic bags. They evoke the sublime, but also suggest the destruction inherent in China’s social and political transformation – the demolition of entire neighbourhoods, the emptying out of rural villages in the largest mass migration in history of workers to the factory towns of southern China, and the growing fears about air quality, pollution, food safety and environmental degradation. Floating plastic bags are ubiquitous in Chinese towns and cities. Luminous and beautiful, Huang’s works are dramatically lit like the billowing drapery of Baroque paintings, while they also recall the silk cloth of imperial China. Huang studied traditional painting from the age of twelve and he continues to emulate its ethereal qualities and its mastery of space and form in his photographic practice.

Huang’s most recent work is an installation in collaboration with his artist wife, Dai Dandan, who has recently turned to art practice following a career in television. In her own Duchampian act of transgression, she purchases rocks, probably intended for fish tanks, from the markets, decorating them with rhinestones and fake jewels in order, she says, ‘to perfect them’. A reference to the beauty of imperial gardens, and a nod to the rich traditions of Chinese art, but also, perhaps, a satire of the imposition of global branding onto Chinese culture, and the nouveau preference for ‘luxe’ consumer goods over the values and beliefs of the past. It is appropriate then, that her work with its ironic edgy glamour also featured in a curated show at Shanghai gallery Studio Rouge’s new branch in Hong Kong, on Hollywood Road, where art meets commerce and many of the Chinese antiquities in the shops are of dubious provenance.
The recent collaborative work between Dai Dandan and Huang Xu (the artist couple is an intriguing feature of the contemporary Chinese art scene) is titled ‘Mr and Mrs Huang in the Humble Administrator’s Garden’. It features Huang’s plastic bag scholar rock images together with his subtly erotic flower photographs and new button pavilion sculptures, juxtaposed with Dai’s ‘assisted ready-mades’. ‘Mr and Mrs Huang’ take traditional Chinese philosophy and aesthetics as their starting point and lay subversive landmines of the kitsch and the banal in the garden of the literati.

To read the whole article, click this link: artists-subverting-scholarly-traditions-in-contemporary-china-2# 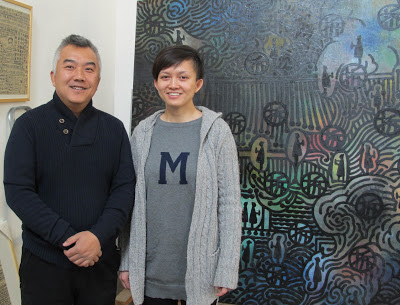 Posted by An Art Teacher in China at 6:05 AM