北京日记 Beijing Diary: Art and Life in a Grey City

My three April weeks in China were lucky ones - even despite the food poisoning (thanks, Guilin) and the viral pneumonia (thanks, Hangzhou). Why lucky? Because you can go to China expecting to see extraordinary contemporary art and find little that excites you, or you can go another time and be blown away by the quality of work shown in galleries and artists' studios, by the sheer energy, vitality and innovation of what Chinese artists are doing. This was one of those fortunate times. And to be back in Beijing in Spring after a twelve month absence was a delight: the sky was (mostly) blue, the parks full of blossoms and ballroom dancers; and the galleries (mostly) open and showing interesting work.
China's dizzying pace of change continues: on every visit, even if only a few months apart, I see new developments. This time what I noticed most was the explosion of the bicycle-sharing app; the streets are filled with colourful bikes rented easily, anywhere, by scanning a QR-code with your smartphone, and then left wherever you finish up. Every ride costs about 20 cents and they are HUGELY popular. Beijing has once again become a city of bicycles. And tiny new electric cars as well. The old tin can 'beng beng' taxis are still there, and the traditional pedi-cabs (not used only by tourists, by the way) but my usual Dongzhimen neighbourhood is filled with little vans silently scooting along delivering water, take-out meals, dry-cleaning, and anything else you can imagine could be delivered in a city of entrepreneurs.
Combined with the three-wheeled carts collecting recycling, generally presaged by a ringing bell and a harsh cry,  it is a collision of old and new. The scourge of the silent scooter on the sidewalk is still there, though, particularly unnerving at dusk, or when the rider suddenly shouts at you to get out of the way. And there's still plenty of sidewalk spitting, which is perhaps a comforting sign that some things don't change. Old bars and expat hangouts have closed (sorry, not sorry) and the gentrification of the hutongs proceeds apace, but the essential character of the city remains, much like its inhabitants - tough, gritty, no bullshit, and a sardonic sense of humour. I was glad to see the battered velour armchairs still on the street in Chunxiu Lu, and the outdoor hairdressers at work in the hutong nearby. And the unique and unmistakeable smell of the Beijing drains is always present.
I was in Beijing for my own research project, meeting with artists who are subverting ink traditions in very particular ways, and most of my time was taken up with long drives to and from studios in Songzhuang, Caochangdi and Shunyi. But in intervening windows of time I visited galleries in 798 and Caochangdi and saw wonderful things.
My top  5 Beijing highlights:
1. Qiu Anxiong, 'New Book of Mountains and Seas Part III' at Boers-Li Gallery - immersive, completely extraordinary. Qiu has created a dystopic universe with just enough connections to the present-day to make it thoroughly terrifying. So immersive that I sat through the entire video twice. Part II was a central element of White Rabbit's 2016 exhibition, 'Vile Bodies'. Here Qiu talks about his work for the exhibition at New York's Metropolitan Museum in 2013: http://www.metmuseum.org/metmedia/video/collections/asian/qiu-anxiong-ink-art 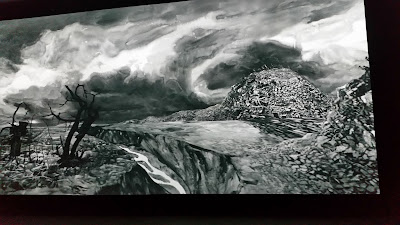 2. Wang Yuping at Tang Contemporary - a remarkable painter whose work I had not seen before. His series of paintings of the intersection near Jingshan Park is so characteristically Beijing that it would make you weep with nostalgia. And how lovely to discover that he taught my good friend Gao Ping at CAFA, and is a beloved professor. The exhibition 'Jingshan Hill' is divorced from current fashion and theoretical discourse and is all the better for it.
https://www.tangcontemporary.com/wangyupingen 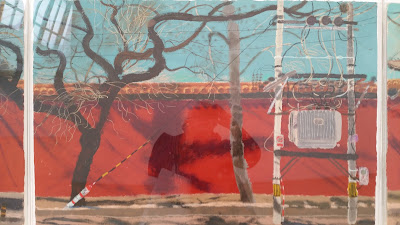 3. Tai Xiangzhou at Ink Studio -  a stunning exhibition called 'Speculative Cosmologies' - the curator says: Working in the literati mode, Tai spent years copying and mastering classical compositions and brushwork. He focuses on the landscapes of the Song Dynasty (960-1279), considered a Chinese golden age for both pictorial and astral arts. Speculative Cosmologies features select examples of Tai’s classicizing style, including Mountain of Heaven, a virtuosic rendition of a Song monumental landscape as a screen—a format charged with cosmological significance; Cosmic Symphonies, an elaboration of a celebrated 13th-century album depicting different aspects of water; and Microcosm-Macrocosm, a primordial landscape without organic life generated from a miniature scholar’s rock. Lovingly and intimately antiquarian, these paintings also ask, speculatively and counterfactually, what a Song landscape would be if it encompassed the vastly expanded scope of contemporary knowledge and experience. http://www.inkstudio.com.cn/exhibitions/24/overview/ 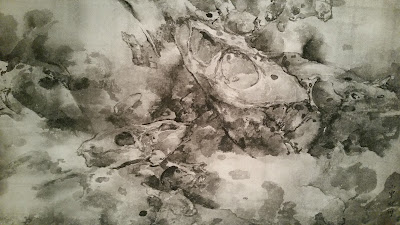 4. Liu Di at Pekin Fine Arts - new directions in the work of this interesting artist, whose digital works of large-bottomed animals plonked in the courtyards of Beijing apartments have been shown at White Rabbit Gallery in Sydney. http://pekinfinearts.com/en/exhibition/liu-di-break-with-convention/ 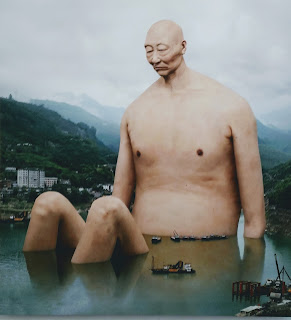 5. An exhibition of new directions in the work of young artists, both Chinese and international, at Ullens Center for Contemporary Art (UCCA) - still with a cloud hanging over its future and no buyer in sight - presented tiny enclosed spaces with lots of video.Highlights here were the futuristic imaginings of Cui Jie - and in China they're not much of a stretch - and a stunning, ambiguous installation by Ma Jianfeng. Here's an interesting article featuring Cui Jie - and Lu Yang who I will write about in a later post: Where Next? Imagining the Dawn of the Chinese Century 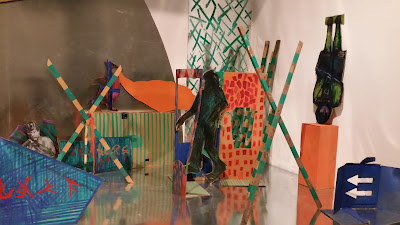 Apart from that, the skies were blue and clear, my wanderings in the remaining hutongs were a delight (even though I still cannot persuade my husband to love Beijing), you can now get excellent coffee all over the city, and it was great to be back in a place that I have come to love like a second home. I visited the studios of Xiao Lu, Ma Yanling, Yu Hong and Bingyi, and spoke with Tao Aimin at Egg Gallery and Ink Studio in Caochangdi.
The following week, in Shanghai, a city I have grown to love over the years, the exhibitions on offer were just as compelling. Next week: Shanghai Diary Revisited.
Posted by An Art Teacher in China at 4:11 AM