I have waited to write about my meeting on Thursday with Hu Qinwu, because it was very significant and made a huge impression on me, and I had to let it sit and ‘percolate’ for a while. I had originally seen his work at an exhibition at the Stella Downer Gallery in Sydney last year – in fact he was one of the first artists that I was determined to contact when I came to China. On Thursday afternoon we met at a café and art bookstore in 798, with Tony Scott, the organiser-in-chief of China Art Projects, and his assistant and translator, Rachel. Mr Hu is a softly spoken and gentle man, who radiates a quiet certainty, and a confidence that owes nothing at all to ‘flash’. He is perhaps the antithesis of the style without substance that so often dominates the artworld.
We went to his studio, near that of Liang Yuanwei at Black Bridge District. Here I was completely astonished at his prolific practice, the beauty and subtlety of his painting, and how it has developed and changed since about 2003. Hu makes us chrysanthemum tea and shows me his most recent works, in tempera or inks on paper, in which the Chinese characters of Buddhist sutras seem to shimmer, dissolve, disappear and reappear under a pattern of repeated tiny circular forms. They are at once abstract and not abstract, meditative pieces which evoke the colour field work of Mark Rothko in their power to engulf and immerse the viewer.
Hu says he chooses to use tempera because it requires great skill and control over the process – it is the opposite of expressionism. He mimes the actions of an expressionist artist, waving his arms around in big gestures, then shows me how, in contrast, he works with great intensity and concentration, with the works laid on the floor, as he drops water onto the layers of tempera to create the dots in a tightly controlled and precise grid pattern, which is sometimes drawn on in fine gold lines. There are also enormous canvases with subtle layers of colour – in some works rich reds and blues lie underneath the greys, blacks and whites of the grid of dots. Recently, however, he has removed all colour in favour of a subtle muted palette of greys. He doesn’t want too many elements occupying the surface – there is an increasing simplicity and purity in these works.
Hu tells me the dots can represent text (much like the text in a Buddhist sutra) which resists one single interpretation. They also hide layers of calligraphy and colour. Irresistibly I am reminded of the way that dots provide the sacred ‘shimmer’ in Aboriginal desert paintings. In Buddhist theology, he says, meanings are arbitrary, and language is just a way of labelling the world. In his practice he has created a unique pictorial language which is precisely articulated, yet suggests many possible interpretations and layers of meaning. His own personal history and the recent history of China have had a profound impact on his work. The change has been so fast, and so overwhelming, that he believes that people must turn inwards to find an inner peace and calm. Quietly spoken, modest in many ways and yet authoritative, when I ask him if he could identify particular artists who have been influential in his practice, he says, ‘No, I believe other artists will look to me for their influence’. All I can think is ‘Lucky, lucky students in the Painting Department at CAFA who are being taught by Mr Hu!’
I am feeling very exhausted and travel weary tonight after another big day. Sometimes I forget I am not 25! I began the day at the Panjiayuan Open Air Antique Market, or ‘Dirt Market’, which is extraordinary, but maybe not for the faint hearted. Spirited bargaining does not come easily to me in English, much less in Chinese while trying to do the maths for the exchange rate (never my strong suit!) and pass the calculator back and forth. I had really hoped to go to the National Museum of China, newly re-opened last week and reputedly a vast treasure house of Chinese history and antiquities, because I particularly wanted to see Song Dynasty painting after meeting Liang Yuanwei on Thursday. To my great disappointment after crossing the vastness of Chang’An Avenue and Tiananmen Square I discovered all the tickets were sold out and none would be available until Tuesday – by which time I will be on a plane to Shanghai. Ah well, I have a list for next time in Beijing, which includes the Summer Palace, the Lama Temple and the Great Wall, because the focus this time is on the art and the art education. 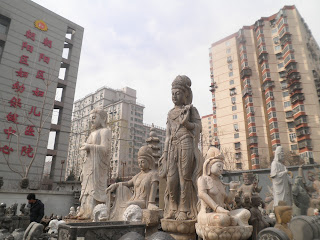 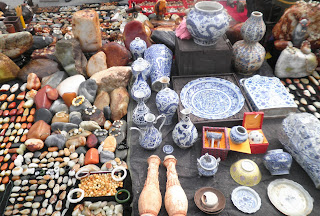 So, off to Qi Jiu Ba for a second visit – it must have been quite amazing a few years ago when it was genuinely an artists’ village in the Bauhaus inspired architecture of the old factory work unit that it once was. Mao era work units were vast, encompassing many factories, schools, shops and worker housing. 798 is no exception, it is enormous. The area has been a source of much dispute recently, I am told, as the work unit, which still owns the land and buildings is, understandably  in my view, anxious to maximise the profits for its ex-workers, but this has come at a cost to the artistic integrity of the zone. Developers and entrepreneurs of every variety have moved in, selling dreadful T Shirts, ghastly pottery and appalling art, mixed in with the serious galleries. These include international art ‘brands’ such as Pace Beijing. It is amazing to me that in October in New York I visited all three Pace Galleries in Manhattan (one on W. 57th Street and the other two in Chelsea) and attended their ’50 Years of Pace’ exhibition, and here they are now in Beijing.
Shasha Liu, the young gallery manager of Art@F2 in Caochangdi had invited me to an opening reception for a new exhibition at Tang Galleries, and this proved to be wonderful. Works are by Chen Zhen, Huang Yong Ping, Shen Yuan, Wang Du, Yan Pei-Ming and Yang Jiechang, in an exhibition called “Tracing the Milky Way” curated by Jerome Sans. This is one of the most exciting exhibitions of contemporary art I have seen so far. Huge and adventurous installations pose questions about what kind of world we live in, and the role of the imagination. 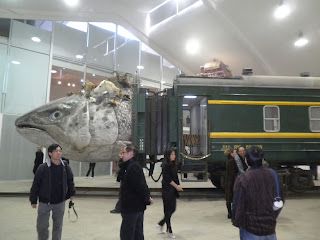 In one work the head of an enormous fish is grafted onto the carriage of a train. The fish head in turn has the heads of other animals protruding from it – an inventive and somewhat disturbing voyage into taxidermy, and a nightmarish vision. Another work is a room filled with firecracker work tables and bundles of firecrackers hanging from the ceiling amidst pendulous lights. Yet another consists of stacks of burned and charred newspaper, with printed Perspex or glass sheets referencing contemporary issues such as war in the Middle East. A work that I particularly like is a documentation of the destruction of traditional ways of life and housing in Shanghai, a meditation on both colonialism and communism. This room is filled with stacks of printed posters relating to these issues, with the instruction “Please take” – so I did.

This exhibition certainly proved to me, if any proof were needed, that the art scene in Beijing is incredibly vital and that artists are working within and beyond international contemporary art conventions. In fact most of the artists I have spoken to talk about national identity and their belief that the world will come to see China as a leader in every respect, including art and design – the label will no longer be ‘Made in China’, but will proudly state ‘Designed in China’ too.
In the 4 hours I spent wandering around 798 I saw much of interest in amongst the tawdry, and also many photo-shoots taking place for ‘China Fashion Week’. I visited a fabulous show of work by Robert Rauschenberg, David Salle and Michael Bevilacqua at Faurschou Beijing, and an interesting show of paintings by Hong-Chen Zhao at the Hong Kong Art Museum. Inadvertently I wandered into another opening reception of an exhibition by a young artist from Macao, Carlos Marreiros, called “Tobacco Wars” which combined  text and drawing in interesting ways. I love the small things about cultural difference – in Beijing, art openings are generally held on Saturday afternoon or evening and include vast quantities of elaborate cakes, in addition to the usual wine! The ME Photography Gallery had a lovely show of evocative black and white photographs documenting the use of the bicycle in Beijing – there is a sense that as more and more people own cars, and live further and further out of the city, beyond the 4th and 5th ring roads, the ubiquitous Beijing bicycle will disappear. The exhibition was like an elegy to a fast vanishing way of life.
It took over an hour for the taxi driver to traverse Beijing and return to my hotel, and during this journey I had to call a Chinese acquaintance and ask her to talk to the taxi driver about where we were going, as so many of them only know the geography of one section of the city.  I feared that we might be driving in circles around the 3rd ring road for all recorded time, like some kind of Chinese version of Dante’s Inferno. By the time I returned I was so exhausted that I couldn’t face another trip out for dinner. There is a McDonalds near the hotel, so for the first time in many years, I entered Maccas, where of course everything is written only in Chinese characters. I successfully managed to order a hamburger and a coke in Chinese, but most unusually for McDonalds I was unable to communicate that I did indeed ‘want fries with that’!
Posted by An Art Teacher in China at 11:46 PM