The Power Station of Art

Three restaurants in Shanghai I don't want to go to:

1. "Good Smell. Good Curry" - thanks but no thanks
2. "The St James Gentleman's Restaurant"
and this one!
3. "More than Toilet", as I understand it, is a restaurant where patrons sit on toilets to eat their meal, which is served on plates shaped like toilets. I did once see a Bunuel film which contained a scene where people sat on the toilet together around a table and then went to a private room with a locked door to eat, but this seems to take a childish poo fetish to an extreme. I can't begin to imagine the customers of this establishment!

And three items from the People's Daily: 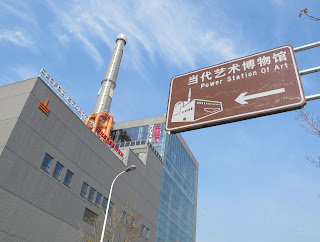 I spent yesterday at the incredible 'Power Station of Art' which houses the Shanghai Biennale. And yes, it is bigger than Tate Modern, as curator Qiu Zhijie promised when he was in Sydney earlier this year. The building is fantastic and some of the work truly amazing. The standout for me was Huang Yong Ping's 'Thousand Hands Kuanyin' (1997-2012), a  homage to Marcel Duchamp’s “Bottle Rack” (1914).  His update of the famous Dada ready-made fills the vast space of the former Power Station from the floor to the ceiling about 6 stories above. On the giant-sized bottle rack Huang has arranged the thousand arms of Guanyin, the Buddhist goddess of compassion who used her multiple limbs to relieve the human suffering caused by reincarnation. These hands proffer objects ranging from mops and brooms through to stuffed animals, skulls and bones, a tortoise and other trinkets.

Readers of this blog will remember the extraordinary 'Leviathanation' by Huang Yong Ping which I saw at Tang Galleries in Beijing last year, and which has engaged my young students in Sydney ever since - a fabulous introduction to the possibilities of contemporary art. 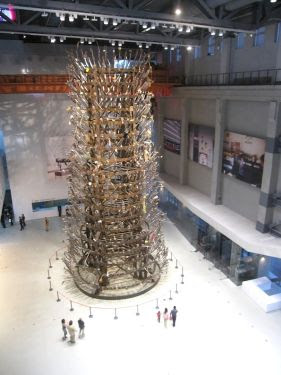 Huang's Tower is also reminiscent of Vladimir Tatlin's Constructivist 'Monument to the Third International', a utopian Modernist dream tower which was never built. It is a work which has been appropriated by a Chinese artist before, when Ai Weiwei created his version outside Tate Liverpool. And  a poignant symbol of the failure of the Modernist and Socialist revolutionary utopia envisioned early in the 20th century. Particularly poignant, then, here in China today, in a society in even greater flux than was Europe in the period before and after 1917. 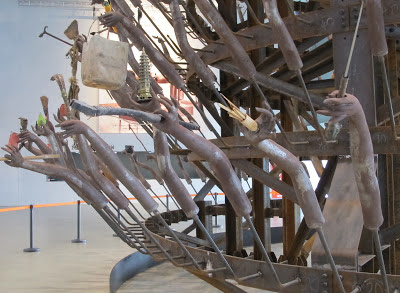 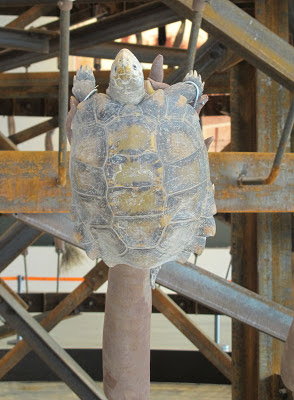 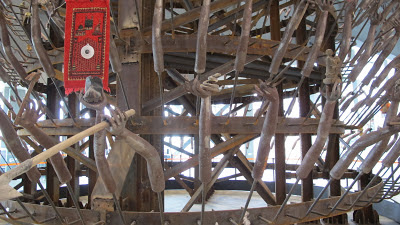 Huang Yong Ping's work is always extraordinary and thought provoking. Similarly impressive is his work currently showing in Shanghai at Rockbund Museum of Art, 'Two Baits' - a mysterious and beautiful installation in which one of the fish has its stomach filled with books. Make of it what you will, the possible meanings are  many and various. 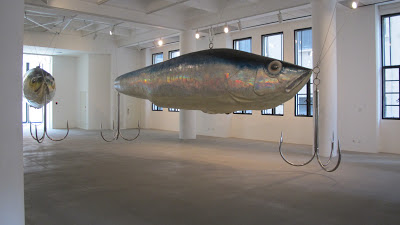 Posted by An Art Teacher in China at 5:06 PM