I was profoundly moved by Erasure, the work commissioned from Dinh Q Le by the Sherman Foundation. In a darkened room, the slow, mesmerising video of the sailing ship burning on a Vietnamese beach, tattered sails consumed by flames and blowing forlornly in the wind, is quite extraordinarily resonant. It made me think of Turner's 'Fighting Temeraire' dragged to its last berth, and then this thought segued inevitably to the death of Cy Twombly this week, as his response to the Turner painting is one of my favourite works in the Art Gallery of New South Wales collection. The weathered, skeletal boats 'washed up' on a shingle made up of thousands of abandoned family photographs, left behind as people fled Vietnam, is an all too poignant reminder of other ships lost at places like Christmas Island, and people desperate enough to entrust the lives of their children to tiny, fragile boats such as these and cross vast oceans in search of a new life. The political catch cry of 'stop the boats' seems more than ever an obscenity.

Last weekend I was at GOMA in Brisbane and saw for the second time the beautiful video work  by Jun Nguyen Hatsushiba, Memorial Project Nha Trang, Vietnam: Towards the Complex—For the Courageous, the Curious, and the Cowards, which was filmed in 2001 on the southeast coast of Vietnam. This shows lyrical footage of  local fishermen pulling cyclos underwater toward the  deepest area where the artist had stretched  mosquito nets across the sea bed. By submerging the cyclos in deep water the artist intended to represent the weight of tradition, and to comment on the continuing significance of Vietnam’s historical past in the context of  modernization.The slow-motion struggles of the boys, straining to pull the cyclos, and floating gracefully up to the surface for lungfuls of air, is also reminiscent of works by Bill Viola such as 'The Messenger', with its evident spirituality and its suggestion of the sublime. 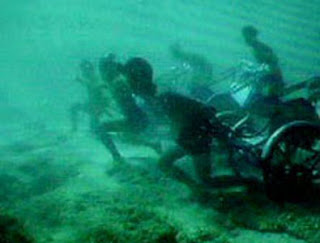 Posted by An Art Teacher in China at 2:02 AM