So how many excuses are there for not updating this blog? I have been slack, it's true. My excuse is that I'm juggling a (very) full time job with a research degree and yet another attempt to study Chinese (hopeless task!) and as a tired juggler I'm beginning to drop the balls. And given that the research and the job both immerse me in reading and writing about contemporary Chinese art every day, this blog has had to take a back seat. I am also engaged in interviewing each Chinese artist from the White Rabbit Collection who comes through Sydney. For a link to the White Rabbit Vimeo Collection - 12 videos so far - click HERE.

Here is the trailer to my interview with the rather provocative artist, Xiao Lu:

I've recently returned from the UK where I presented a paper about my current research - no surprise to those in the know, it's focused on women artists and gender in contemporary practice. I'm writing an article for a new website (watch this space), a paper for a journal, and also writing up my interview with the very interesting performance artist, Xie Rong (Echo Morgan) whom I interviewed in London. And I'm in the final throes of a major book project.
More on my fascinating conversation with Xie Rong, over coffee in the British Library, coming very soon.

In the meantime, here's my recent article about Bingyi, who also features in my current research project and was a focus of the paper I presented at the Annual Conference of the Centre for Chinese Visual Art in Birmingham last month.

Chinese contemporary artist, Bingyi (her full name is Bingyi Huang but she goes by one name, like a rock star), has ‘bombed’ the airfield at Shenzhen’s Bao’an Airport with 500 kg ink and oil missiles in order to create a dramatic painting for the terminal. She has created vast ink paintings 200 metres in length by laying specially made paper on basketball courts and mountain roads, pouring and hosing ink and water by the light of car headlights. She has sometimes burned her own paintings, letting the ash and paper fragments fall and mix into the ink of new works. A precociously gifted child, born in Beijing in 1975, Bingyi grew up to become a true polymath: an art historian with a doctorate from Yale, she has composed operas and ballets, made films, incorporated her knowledge of science and engineering into her artworks, and recently started a school for young artists and activists in Beijing. All in addition to creating exquisitely beautiful small ink paintings and large, expressive figurative canvases. An essentially self-taught artist, she began to paint in her mother’s living room in 2007, after eye surgery to correct her extreme short-sightedness.
Bingyi did not start painting with ink ­ — that came later — but with oil and acrylic on canvas. She developed an expressive and intuitive painting idiom that she describes as a search for the sublime. Her vision is not the European Romantic sublime, but a specifically Chinese notion informed by Buddhist and Daoist philosophy. From metaphysics to classical Chinese literature; from the poetry of Emily Dickinson to contemporary music; from Song and Yuan Dynasty ink painting to postmodernism, from geology and meteorology to physics and arcane mathematics, Bingyi brings a wealth of esoteric knowledge and a passionate interest in the possibilities of intellectual inquiry to her work. She is also a dancer and a musician, and a performative theatricality has certainly found its way into her work, but her approach, even when working with oil or acrylic, is the disciplined, controlled method of the traditional ink painter: each mark of the brush is deliberately placed. Her works appear painterly, but their apparent spontaneity is carefully considered.
Six Accounts of a Floating Life (2008) is characteristically literary in its density of poetic allusion and ambiguous narrative structure. Inspired by the memoirs of the eighteenth-century writer Shen Fu, it evokes the literati tradition of the handscroll, designed to be slowly unrolled and closely examined in scholarly gatherings called ‘yaji’. The handscroll represents the passage of time in an episodic manner: viewing a scroll is a sequential unfolding, intimate and revelatory. The size and format of a scroll makes the experience uniquely suited to a conversation between connoisseurs, poring over each new visual delight as it is rolled and unrolled. It is a method of painting that takes the viewer on a journey through time and space, both metaphorically and literally. 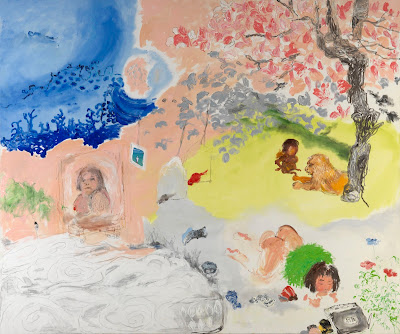 The artist describes Six Accounts of a Floating Life as a metaphysical love diary that describes life’s flow, its ‘shengming de huadong’. Its expressionist style and scribbly calligraphic line recall the innovations of early twentieth century painters, but the small figures scattered across the composition suggest, rather, the Chinese tradition of the wandering scholar. Each of the five (not six) panels depicts separate incidents, small moments in the passage of time, from the innocence of childhood to romantic love, its inevitable unravelling, and, finally, to death. 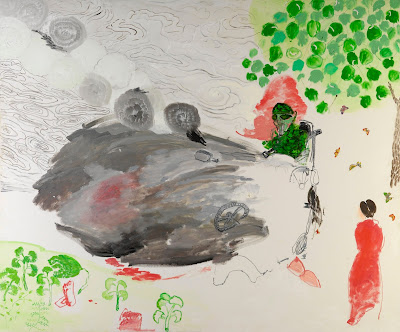 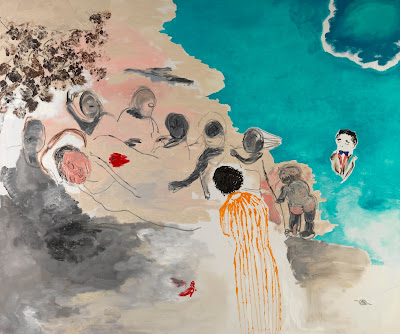 The original literary work is a multi-layered chronicle that tells and re-tells significant events in consecutive chapters, revealing new details and different points of view, shifting from private and domestic moments to public events and, rather surprisingly, to long descriptions of gardening and flower-arranging. Chapter titles such as The Joys of the Wedding Chamber, The Pleasures of Leisure, The Sorrows of Misfortune, and The Delights of Roaming Afar, are replicated in Bingyi’s appropriation of the text. The original memoir concludes mysteriously after only four sections, rather than the six alluded to in the title. (Two final chapters published in the 1930s were subsequently revealed to be fraudulent.) Bingyi similarly suggests an element of mystery with her five panels. It can be conjectured that the missing sixth panel represents an absence, a space in which one can insert whatever narrative you please, connecting artist to her audience.
Monkeys and butterflies cavort through the paintings, referencing folk tales and classical literature. Bingyi’s multi-layered iconography links western and eastern philosophy, and personal events with universal human experiences. Another reference in her complex lexicon of imagery is to sacred Buddhist frescoes in the caves of Dunhuang, along the Silk Road, as well as to western art history and Christian theology. In the second panel of the series, two nude figures are depicted surrounded by green foliage, birds and butterflies, an allusion to Adam and Eve in the Garden of Eden. Semi-transparent, their pink skin reveals the organs beneath. The male figure has a brain and nervous system, the female is in possession of a heart and lungs: Bingyi sees the wonder as well as the danger in the intertwining of separate identities in passionate romantic relationships. If you lose yourself entirely, what then?
Bingyi’s immersion in Chinese art history – her Yale PhD thesis was a study of the Han Dynasty – provides a depth of understanding that she applies in a contemporary idiom, whether working on a small and intimate scale or in the monumental ‘land art’ ink paintings for which she has become well-known. With Six Accounts of a Floating Life, the large scale of Bingyi’s paintings render the experience immersive, almost cinematic. It is like reading a book, but a book where the ending has deliberately been left open for the viewer to imagine a conclusion. Perhaps the absent sixth panel is the ‘colophon’, where in traditional handscrolls the owner and other viewers would attach their comments, or engage with the comments left by previous viewers, like a pre-digital version of a social media ‘thread’.
A serious accident in 2009 in which Bingyi’s clothing was set alight by a candle flame left her very badly burned, subject to a series of traumatic and excruciatingly painful medical interventions and operations. I Watch Myself Dying (2009) expresses the horror of this experience, with the artist’s fragile body lying on the operating table under brilliant lights, watched by an alternate self who hovers above her like the soul leaving the body. This creature is Cyclops-eyed, with engorged breasts, pregnant with suffering. Malevolent faces crowd into the top of the composition, recalling Ensor’s masked figures in The Entry of Christ into Brussels. Part of a series of works entitled ‘Skin’, it’s an unsentimental representation of physical anguish, making deliberate references to Thomas Eakins’ nineteenth century medical portraits, and his paintings depicting surgical procedures. 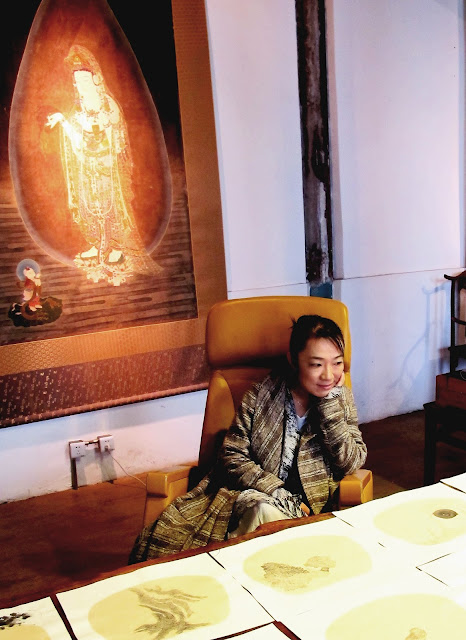 Cathartic and gestural, Bingyi once again references the work of Philip Guston, a painter who understood suffering, whilst her floating figures reveal a distinctly Chinese sensibility. The pink body of the artist lying on the table, organs and sutures visible on the surface, is like a pupa in the process of becoming. The most autobiographical of Bingyi’s works, it nonetheless reveals her scholarly and poetic approach, layered with dense literary and artistic allusion. She likens her practice to composing music, or writing computer code, using a language that juxtaposes the intuitive with the controlled and systematic. Like the imperial scholar painter in his study, Bingyi applies a highly refined visual language to express her deepest feelings and responses to the events of her world. In a long conversation in her studio, a converted Yuan Dynasty temple in the oldest part of Beijing, she said, ‘It’s like I am composing a riddle. I am convinced that in a thousand years, people will dive into my paintings and they will want to know what kind of a literary maze I was constructing.’
About the artist:
Born in 1975 in Beijing, Bingyi’s training as an art historian informs her painting practice. Her doctoral dissertation at Yale was based on her study of the Han Dynasty, and her deep knowledge of Chinese art and literature underpins every aspect of her practice. Bingyi’s paintings and installations have been shown in the United States, Korea, Spain, Belgium, Canada and Hong Kong, as well as in group and solo exhibitions in China.

Photographs of Bingyi in her Beijing studio by Luise Guest
Published on The Art Life: http://theartlife.com.au/2017/a-floating-life-navigating-bingyis-literary-maze/

Posted by An Art Teacher in China at 3:03 AM