China and the Zeitgeist

I have been immersing myself in Chinese art to an even greater extent than usual: books and articles about Chinese art, web sites dealing with Chinese cultural issues, and exhibitions of Chinese art, to the point where I am dreaming about Chinese art....strange that suddenly there seems to be so much to look at and write about here in Australia. China is THE hot flavour of the month right now it seems, and all things Chinese, from food to fashion, art to literature, music and film, are suddenly highly desirable. 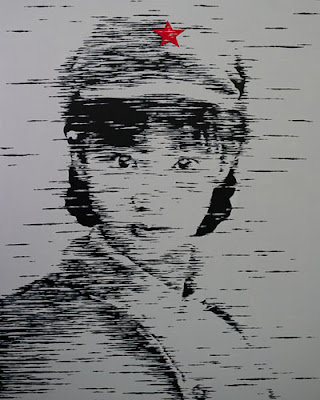 Song Yi, 'Girl', oil on canvas, image courtesy of Red Gate Gallery, Beijing
During the Sydney Chinese New Year celebrations, which culminated in the rather daggily charming parade that I described in a previous post, the Sydney Town Hall was the unusual site for 'Two Generations: 20 Years of Red Gate Gallery', an exhibition of work by artists from the Red Gate Gallery stable. Brian Wallace, the Australian director of this highly respected Beijing commercial gallery, asked a number of his senior artists to each nominate a young emerging artist for inclusion in the show, and the results were fascinatingly diverse and very impressive. There were  many wonderful works, including the luscious red calligraphic surface of 'Work 1112', a painting by Jiang Weitao revealing the continuing interest in painterly abstraction in Shanghai in particular.
From this substantial show in the centre of Sydney to the National Museum in Canberra (which has since the end of 2011 been showing a large exhibition of works from the collection of the National Art Museum of China, 'New Horizon) felt like a longer journey than just the tedious drive down the Hume Highway. This exhibition was uneven in its quality, with fabulous works by significant artists juxtaposed with more pedestrian works by (presumably) artists with impeccable political connections. The catalogue was particularly appalling - as if written by someone from a government office with little knowledge of art or the art world. While it was good to see the patterns of change in China as represented in artworks over the years since 1949, the exhibition as a whole was really quite bizarre, despite the inclusion of Xu Bing and Shen Jiawei.

I have written more extensively about both these shows in an article posted on The Art Life:
Drifting Clouds: Two Views of Chinese Art

Last weekend I spent some time in the current exhibition showing at Ray Hughes Gallery in Surry Hills, 'China's Decade', which provided an illuminating contrast with both the previous shows. Hughes is one of the first people in the Sydney art world to understand the significance of the art being made in China in the early 90s, and the first to begin to show Chinese art in Sydney. He told me that he is now particularly interested in what is happening in Chongqing, that huge city of 38 million people in Sichuan Province, as he believes it has become a central locus of innovation and interesting practice. The works range from explorations of popular culture ('Infection Bambi'by Zhou Siwei, for example) to Li Jin's lyrical ink paintings of a kind of 'floating world' of everyday life - eating noodles, lying about watching television, making love. I loved the  fabulous examples of the 'Gaudy Art' of the 90s, such as the machine embroidered silk works of Chang Xugong which feature maniacally grinning karaoke singers and self satisfied toothy 'entrepreneurs' in brightly coloured suits clutching mobile phones and other accoutrements of  'success'.  The exhibition demonstrates the diverse richness of contemporary art in China, charting the startlingly rapid change in society and all the tension, dislocation and fragmentation that results from that, as well as the unalloyed joy and satisfaction of sudden wealth and access to all the desirable products of global capitalism. This last is featured in a cynical and witty form in the fibreglass fat babies of the Luo Brothers, lolling about on Pepsi cans or wrapping themselves around Big Macs.

Best of all, however, was the painting by Liu Xiaodong, Unknown Pleasures, a work dating from 2002. A wonderful painter, his work is never facile despite his mastery of the painterly surface and gestural mark. In this work, the solitary figure smoking a cigarette in a street lined with shoddily constructed commercial buildings seems to embody a weird mixture of existential despair and hopefulness - the zeitgeist, perhaps.

Posted by An Art Teacher in China at 4:37 AM