Having spent several hours at Art Melbourne this weekend, I can tell you that the theme du jour is,  unequivocally, 'Birds'. Yes, the feathered creatures feature in works showing at the stands representing serious galleries and those by, hmmm, let's call them 'self-represented' artists. These last tend to the embarrassingly earnest, slightly Easter Show variety of paintings, often featuring clunky collage or very impasto paint surfaces. They sometimes also feature the addition of gold leaf, which is almost always a VERY bad idea and invariably evokes the paintings found in hotel rooms, which I suspect are bought by the metre from Chinese factories.

Once I had identified this 'bird' trope at the first two stands, I was compelled to search the entire Royal Exhibition Hall to see if it was just a coincidence. And discovered that it seems to be compelling subject matter for artists in every conceivable medium. Perhaps Lucy Culliton's rooster series and Craig Waddell's paintings of chooks (both of which are wonderful) have spawned a plethora of followers?

Iain Dawson Gallery was showing a series of large photographic portraits of budgerigars by Leila Jeffreys. These are wonderfully witty, referencing the conventions of serious portrait photography, and suggesting all sorts of human characteristics to viewers with an anthropomorphic bent. I heard one woman say to her companion, "Look, this one's a barrister, and that one's a politician!". The gallery's representative told me that the artist constructed special white boxes to keep the little creatures still enough, but they are terribly vain and love seeing themselves in the mirror. Another human trait.
Brisbane's Lethbridge Gallery showed paintings of birds by Jodie Wells, featuring the kind of impasto that has the quality of cake frosting applied with a spatula. Even Julian Meagher showed a work featuring a bird amongst his usual tattooed male torsos and orchid stems in beer bottles. Bird as a pictorial code signifying masculinity? That's a new bit of visual syntax!

After that I'm afraid it all went very steeply downhill. The artists producing twee images of birds with pretty girls, birds with flowery textile patterns, birds with scrapbooking-style collage and birds with paint laid on with a trowel like spackfilla, had best not be named and shamed.

It was great to see an area of the exhibition space given over to galleries representing artists from Asia, including the Macau based organisation AFA. One of their aims is to build an 'exchange platform' between Macau and Beijing. Last year in 798 one Saturday afternoon I stumbled unwittingly into their Beijing gallery's vernissage of a show by Macau artist Carlos Marreiros, 'Tobacco Wars'. It was one of those rather weird Chinese gallery openings featuring red wine and highly decorative cakes, served by highly decorative girls, but the artist's works are very interesting, combining elements of his architectural training in their structure, together with elements of his Portuguese and Chinese heritage. He explores themes of postcolonialism and contemporary cultural ambiguities. Not a bird to be seen! 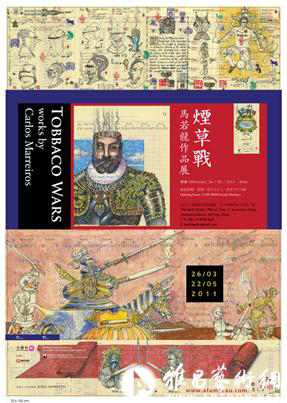 Posted by An Art Teacher in China at 4:54 PM