Last week I had a long conversation with Sydney-based, Chinese-born and trained artist Tianli Zu, just prior to the opening of the exhibition 'In Possible Worlds' at 4A Centre for Contemporary Asian Art. Our discussion ranged far and wide, from the intricacies of her practice of paper-cutting and how she learned it from the peasants in Shanxi Province as a student, to her sadness at knowing that she was always the unwanted second daughter, and not the longed-for son. We spoke about the ways in which women must constantly juggle different roles - being mother, wife and artist is not an easy path.

Throughout our conversation about her interesting art practice this theme of the status of women in Chinese history, both in the distant Imperial past and the closer Revolutionary past, kept on re-emerging. Dark folk-tales, unhappy family memories and reactions to all the girl children aborted or abandoned due to the One Child Policy are a recurring theme in her work.
Here is an excerpt from our conversation:

Her childhood and teenage years were spent in Beijing, during the tumultuous 1960s and 1970s. Tianli Zu grew up with her grandparents. Her parents were ‘sent down’ to the countryside during the Cultural Revolution, but even before that time her childhood memories are filled with dark shadows. “The day I was born, my mother cried. I was born on the national day, which should have been a happy time. But she said to my father, ‘Another girl’, and then from the first day I came back from the hospital I lived with my grandparents.” She had a sense, always, of being unwanted. “They always said they intend to exchange me with my boy cousins,” she says sadly. “But I always wanted to be loved. This love thing is to me so important, and I wanted to be loved, and I always wanted to make them happy and satisfied. But each time … I am always in the wrong.” When her parents made their infrequent visits, she would lay out all her schoolwork and the calligraphy that her grandfather taught her, desperate for their approval and praise, receiving instead only criticism. “This kind of traumatic memory becomes a shadow – it’s always there.” She points out elements in her work that symbolise this deep sense of abandonment. Slowly falling drops of water become flames, or in another sequence, merge together to become piles of excrement. “You think it’s a beautiful drop of water, something that will get to somewhere… (that will) bring you something good. But then – it’s a pile of poo!” Zu laughs then, as she does many times throughout our conversation, even when the subject matter seems especially dark.
Despite the horrors of the Cultural Revolution, not all her memories of this time are sad. Her grandparents were the foundation of much of her work today. “My grandmother taught me sewing and paper cuts. My granddad taught me calligraphy and every afternoon he read me the traditional stories – the ‘San Guo Yan Yi’, which is all about revenge, royalty, war and strategy.” This story, ‘The Romance of the Three Kingdoms’ is about the three power blocs that emerged from the collapse of the Han Dynasty. It is filled with battles, intrigues and struggles for dominance. The famous opening lines explain why the story has continued to haunt Zu’s memory and influence the imagery in her work: “It is a general truism of this world that anything long divided will surely unite, and anything long united will surely divide.” She is haunted by feelings that as a child she could not understand, and by the divisions and separations which prevented a sense of belonging and acceptance. In her work, she is facing her deepest fears, and confronting the past. Zu is the product of a culture in which what is hidden is sometimes more important than what is revealed. “I came with a shadow,” she says, “and with my parents’ shadows. I was my parents’ shadow. I was living to their wish … That’s one thing I cannot run away from, I have to embrace this shadow.” Her work is deeply, intensely personal in a manner similar to some of the artists that she most admires: Louise Bourgeois, Eva Hesse, Kara Walker and Yayoi Kusama also ‘embrace the shadow’ in their work.
To read the whole article on 'The Art Life', click HERE
Something that has interested me for a long time is 'Nu Shu' ( 女书) or 'women's writing, a secret form of character writing that was used exclusively among women in Jianyong County, Hunan Province. According to that most authoritative of sources, Wikipedia, "A large number of the Nüshu works were "third day missives" (三朝書, pinyin: sānzhāoshū). They were cloth bound booklets created by "sworn sisters" (結拜姊妹, pinyin: jiébàizǐmèi) and mothers and given to their counterpart "sworn sisters" or daughters upon their marriage. They wrote down songs in Nüshu, which were delivered on the third day after the young woman's marriage. This way, they expressed their hopes for the happiness of the young woman who had left the village to be married and their sorrow for being parted from her. Other works, including poems and lyrics, were handwoven into belts and straps, or embroidered onto everyday items and clothing."

So women who had no access to education or literacy were able to communicate with each other in the form of embroidered gifts.

Australian artist Marion Borgelt made a series of works, 'The Cryptologist's Memoir' based on this secret language - see more information HERE
And this reminds me of Tao Amin, whose work I discovered by chance in 2010.
" Using installation combined with oil painting and video, Tao Aimin bears witness to the lives of the rural poor. Focusing on women in particular, she creates art with an anthropological side to compliment and enlarge the aesthetic. In River of Women and Book of Women, she uses wooden washboards to create moving and thought-provoking installations—monuments to the daily lives and grinding labor of rural women.
"I went to villages all around the countryside outside Beijing collecting washboards. I explained to the women there that I wanted to incorporate their labor into my work as a way of acknowledging and respecting it. I listened to them tell me about their lives." The artist’s playful expression disappears as she narrates the intense process of creating her latest works.    Both pieces employ over 60 such washboards as a tribute to the way in which repetitive manual labor marks the passage of life for the rural poor. In River of Women, Tao Aimin hangs boards under lights, fashioning a metaphorical river.         Onto each washboard, she has painted the faces of each board’s owner, whose lined, sun-weathered expressions iconically resemble the age-worn ruts of the washboards themselves. In the background, the sound of a washing machine cycles repeatedly, as if to ask what the status of such women will be in the age of modernization. Book of Women uses such labor-worn washboards to form an ironic book constructed in the ancient style of calligraphy scrolls made from bamboo tiles in order to underscore the ways in which ordinary women’s cultural contributions have historically been circumvented by a lifetime of labor. " (Source: http://www.nyartsmagazine.com/?p=3892)
How interesting to see that she has recently exhibited in a show at Paterson University New Jersey with 3 other female artists, including Lin Tianmiao, who told me in December that she did not agree with 'women only' shows in Beijing, finding them 'regressive'. Perhaps it's different in America? The show is A Women's View: New Chinese Art, curated by Kristen Evangelista and Zhang-He.
And from this a segue to .... past western representations of Chinese women: 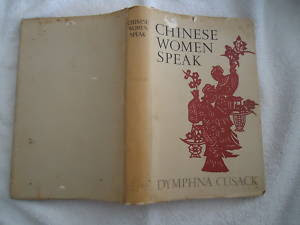 This is a book that a friend found for me in a second-hand bookshop. 'Chinese Women Speak' by Australian writer Dymphna Cusack, was published in Sydney in 1958. The author of 'Come in Spinner' spent 18 months in China and travelled over 7000 miles through the countryside, visiting both cities and villages. 1958 was the start of the 'three bitter years' of Mao's ill-judged 'Great Leap Forward' and the beginning of the famine that historian Frank Dikötter, having been granted special access to Chinese archival materials, estimates caused at least 45 million premature deaths between 1958 to 1962. During the time that she was there, for those with less starry eyes there must have been signs that all was not well. But In Cusack's account there is no sense of any privation or hardship observed anywhere. One wonders how she and other 'foreign friends' at this time could possibly have been so naiive, as they were ushered around 'Potemkin Villages' and showpiece factories and apartment buildings in Beijing, Harbin and other cities. Cusack's partner, journalist Norman Freehill, was a member of the Australian Communist Party so they were honoured guests of the Chinese government, feted and banqueted everywhere they went throughout China.
The artist of this poster designed glamorous movie posters in the 1930s, and the style is still evident in the works he produced after 1949. No woman in a rice field ever looked like this. But this is also the picture painted by Dymphna Cusack in her descriptions of rural life

She and her companions went to the opening of the People's Congress in the Forbidden City, and she describes the scene in great detail, including encounters with female delegates from ethnic minorities who tell her how happy they are that under Communism there will be no more discrimination or 'Sinization' by Han Chinese (!). She describes an encounter thus: "Then two women come towards me. We smile at each other. They stop and hold out their hands. Will I walk with them? I go, their arms linked in mine, the interpreter following....I  want to know something of Li Yu-hsin's life and she sums it up for me in a sentence. "Four years ago I was illiterate. Last year I was selected to go to a women's conference in Switzerland...now we all eat rice every day out of good china bowls." Their conversation is interrupted: "Premier Chou Enlai has come up to us. We are presented to him." When the women take their leave of her they say, "You must come and visit us, Come and see for yourself how Chinese women have stood up!"

Her focus is on women - she meets Zhou Enlai's wife, and everywhere she goes, she writes about happy women with fat healthy babies, in picture perfect, clean, prosperous villages and city dwellings, liberated from centuries of feudal oppression. The mental picture as one reads her account is of the propaganda posters of the time, with happy smiling peasants and victorious heroines of industry. It is an interesting case of seeing what you want to see. It is so very much of its time, in a writing style filled with exclamation marks and a kind of jolly hockey sticks 'all girls together' style. It is incredibly poignant to read this now, with all the benefits of hindsight. How interesting it would be to read an alternative account of this highly organised and stage-managed travel, of the behind-the-scenes manipulation of show apartments and show villages, of scripted encounters with people and the removal of anything that might suggest an alternative reality.

Posted by An Art Teacher in China at 1:07 AM