Spring in the 'Jing

How to describe Beijing in Spring? I have just walked home to the apartment where I am staying in Tuanjiehu in the late evening light, pondering just why it is that I love this city. It's filthy - and I mean really filthy. It's pretty ugly, let's be honest. The razing of the old courtyards and lanes has resulted in a city of enormous 8-lane highways lined by pink apartment blocks and the occasional "statement" building, which is often either unfinished or in a state of collapse. Everything is covered with dust. The air is foul, with many days of particulate pollution beyond actual measuring. People can be pretty rude and brusque in a way with which New Yorkers would be familiar. Some westerners find this hard to take, but I tend to like Chinese directness. There is no bullshit and no beating around the bush. There certainly are many things that are disconcerting, for example the constant public hawking and spitting, the piles and piles of rubbish around the roads of the villages where the artists have their studios - and the tendency for women of a certain age to see no necessity to close public toilet doors whilst squatting. This disconcerts me every time I come here. Public toilets in China are much improved even in the few years that I have been visiting, but the traditional style ones do take some getting used to - one moment of absent-mindedness and you forget that there is step down outside the door and fall embarrassingly into the arms of a startled cleaner. Beijing traffic jams are also legendary. The words for "traffic jam" and "air pollution" are now in all Chinese language textbooks. So, what's to like? 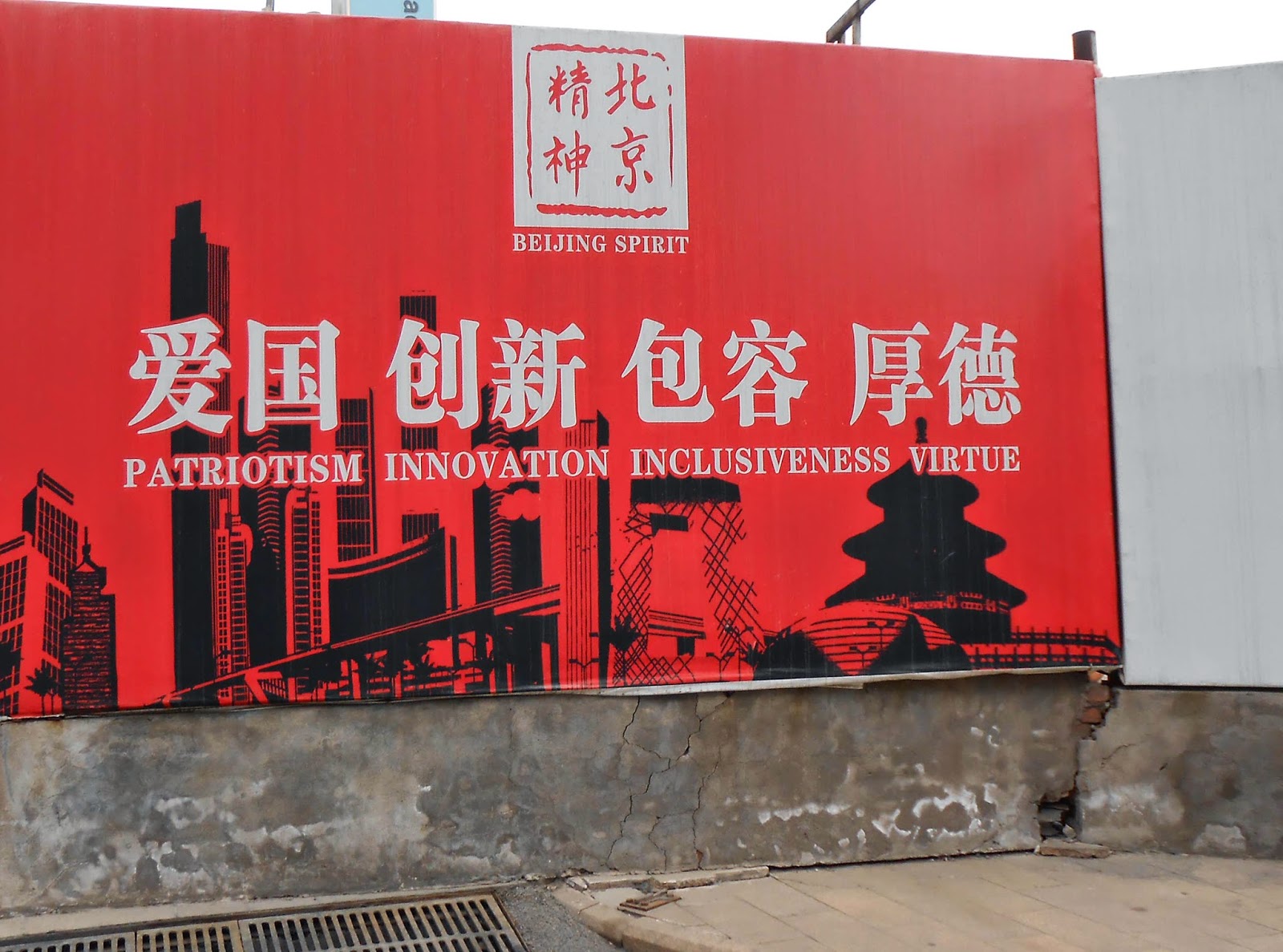 Well, here are a few things:
A girl just sailed past me on her bicycle, dressed entirely in gold lame including her Roman sandals, her waist-length black hair flying behind her as she effortlessly threaded her way through the cacophony of honking, swearing taxi drivers, BMWs and Mercs with tinted windows, three-wheeled carts laden with enormous piles of mattresses; recycled cardboard; stacks of timber; watermelons and, in one case an entire family and a refrigerator. Bicycles of every possible shape, size and degree of decrepitude ridden by people of every age, shape (and degree of decrepitude) followed random paths across the 8 lanes of the intersection, taking no apparent notice of the kamikaze taxis and trucks. I have never seen a helmet on anyone riding a bicycle or a motor bike. Most have several passengers riding side-saddle. Pedestrians dart into the middle of all of this chaos whenever there is the most minute gap in the traffic, holding up one hand like King Canute parting the waves. And it works! I take my life in my hands and stick close to old ladies and people carrying children, hoping that the magic talisman of holding up one hand against the streams of traffic will work for me too. So far so good, but I had better not try it in Sydney!

Towards me along Gongti Beilu come hordes of walkers in the late evening light. Hipsters in weird matching skin-tight suits with digital prints and geometric haircuts; a girl wearing a Union Jack poncho with a Louis Vuitton - maybe - bag dangling with Hello Kitty accessories; and tiny old ladies and men wearing cloth shoes. The sellers of "Tibetan" jewellery are out in force. A snack cart is selling pineapples scored into beautiful swirling shapes and weird sausages on sticks. A family group sits on stools around a brazier next to the subway entrance eating chuan'r (lamb - maybe - grilled on a skewer) and squid. A young woman in head-to-toe pink throws a massive hissy fit and storms away from her sullenly resigned boyfriend, throwing invective back over her shoulder. He trudges behind, carrying her shopping bags. In the park the older women - aunties and grandmas - are dancing in unison in the fading light and the water calligraphers are intent on their beautiful transient characters. There is pink blossom on the trees, musicians playing in all the pavilions - some beautiful and skilful, some not so very - and tiny children are everywhere.
Really - what's NOT to like? It's endlessly fascinating, amusing and intriguing, despite all the very real issues and concerns, and despite the fact that it's a tough, tough city to live in. An old man in a blue suit followed the girl in gold lame across the intersection and rode his bike up along the sidewalk, singing loudly to himself. All humanity is here, in all its guises. Such a cliche, I know, to talk about contrasts and juxtapositions but this is what makes Beijing fascinating - it's a place in flux, reinventing itself constantly.On the one hand, Tuanjiehu Park and its "renao" frenetic activity, and on the other hand, the new suburbs on the outskirts where I met artist Dong Yuan today. In one block I saw a mock Tudor half timbered complex of houses and apartments, a grandiose and enormous building under construction - part ancient Rome and part Las Vegas - called the Hot Springs Resort, and an apartment complex called Hawaiian Hacienda. Talk about postmodern pastiche! 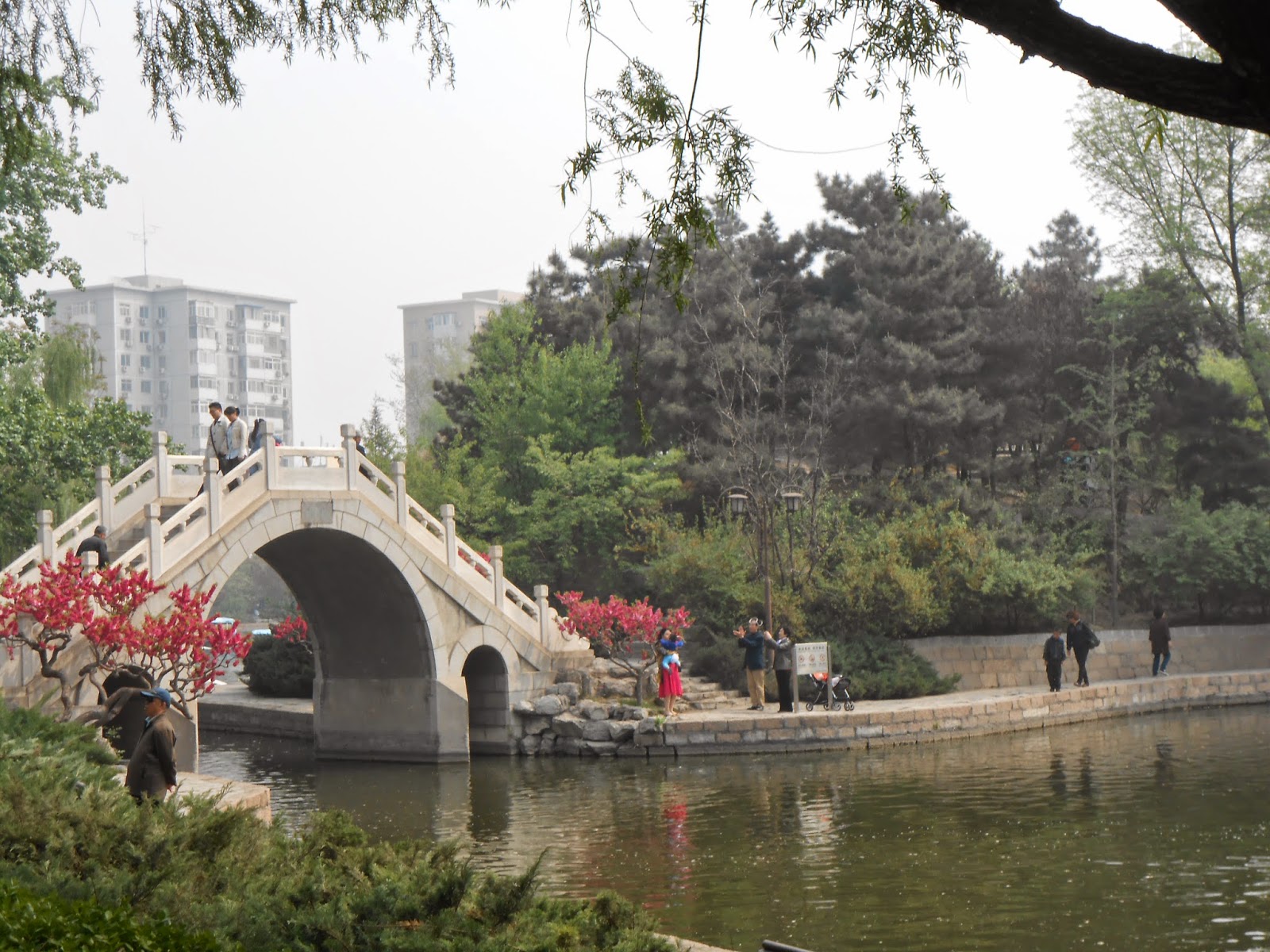 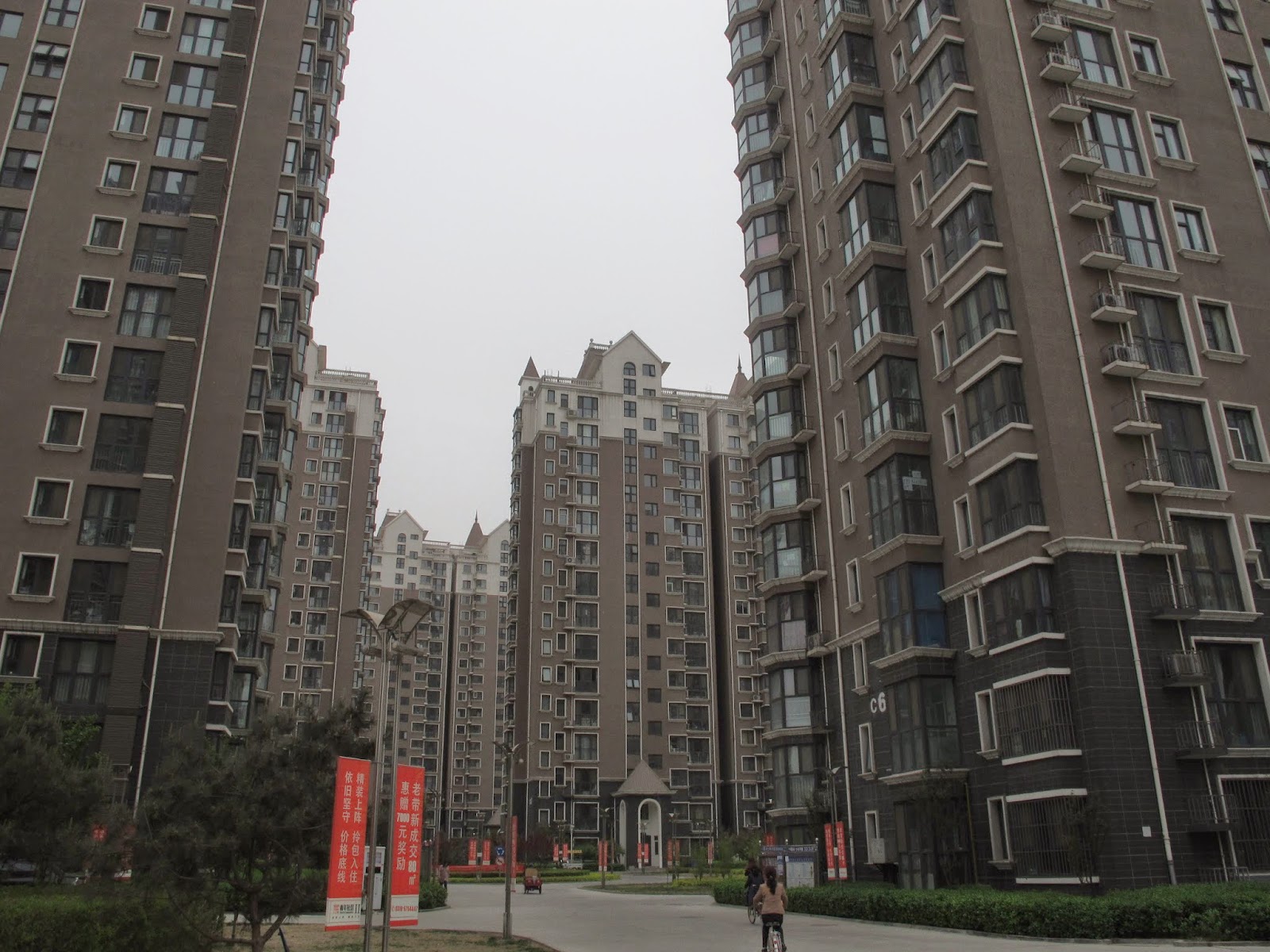 And - there's the art! I have seen an exhibition of Ma Yanling at 798 - an unexpected discovery. You can find my previous article about her work on Creative Asia here: http://www.creative-asia.net/content/secret-script-painting-and-performance-work-ma-yanling 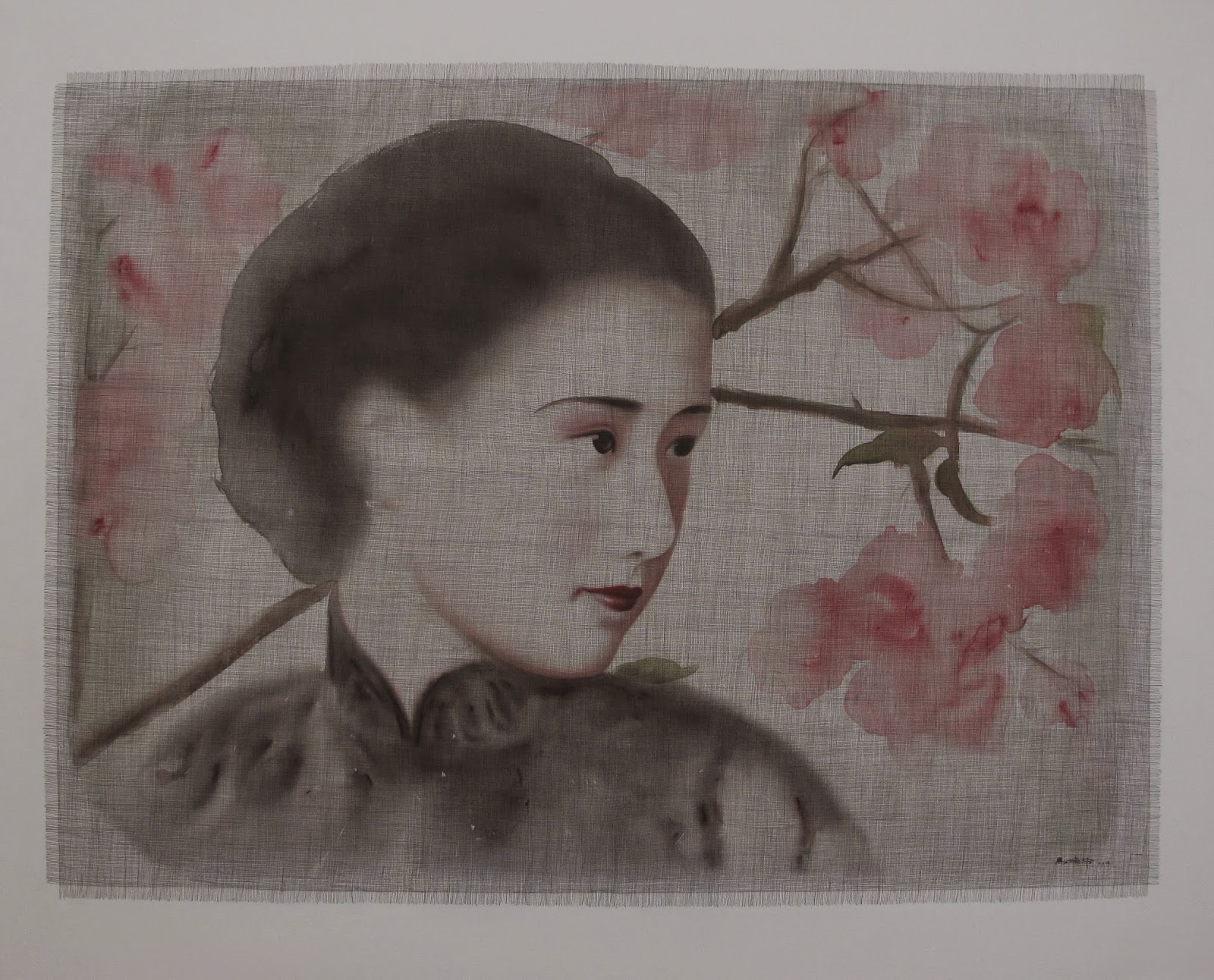 So far I have spent time with artists Lin Jingjing, Hu Qinwu, Tony Scott, and Gao Ping and today I drove so far out of Beijing that we were actually in Hebei Province to see the extraordinary Dong Yuan. Her new work to be shown at Art Basel Hong Kong next month continues her elegiac memorialisation of her grandmother's house beside the sea near  Dalian. She told me she is too sad to return - the sea is polluted - even the groundwater in her home village is polluted and toxic and all the landscapes that she loved have gone. Her new paintings are constructed like cabinets of curiosity, with doors and drawers that open, revealing paintings within the painting. A world of secrets.

More about these artists later, but here are some links to my previous writings about their work.
Hu Qinwu: http://theartlife.com.au/2012/the-whole-thing/
Gao Ping: http://theartlife.com.au/2012/still-life-girls/
Lin Jingjing: http://dailyserving.com/2014/01/material-practices-stitching-fabric-and-textiles-in-the-work-of-contemporary-chinese-artists/
Dong Yuan: http://www.randian-online.com/np_feature/in-grandmothers-house/
Meanwhile, pink is the colour du jour: on the shoes of an extraordinarily dolled up middle-aged woman in the park, worn with electric blue tights - she was ballroom dancing with another woman wearing a saggy tracksuit - and on the handbags of numerous women seen in Sanlitun, and pretty much everywhere I look. Tomorrow, I meet Li Tingting, who does some surprising things with pink ink. Watch this space.

Posted by An Art Teacher in China at 5:56 AM