The Self and the Other

Long overdue: A post that I entered in an artwriting award,so couldn't publish till it was all over -- didn't win, but that's OK! I wanted to review this particular show because I have long been interested in the work of Echo Morgan/Xie Rong. Since I wrote this piece, I've met and interviewed the artist in London, and I plan to write more about her performance work:  she takes the notion of Chinoiserie and wrestles it into the ground. And the show included Angelica Mesiti - so what's not to like? It also seemed particularly apposite to post this the day after Australia's parliament finally -- finally! -- voted to legalise same-sex marriage.

The Self and the Other: ‘Engender’ at Alaska Projects
‘Love will find its way through all languages on its own.’ (Rumi) 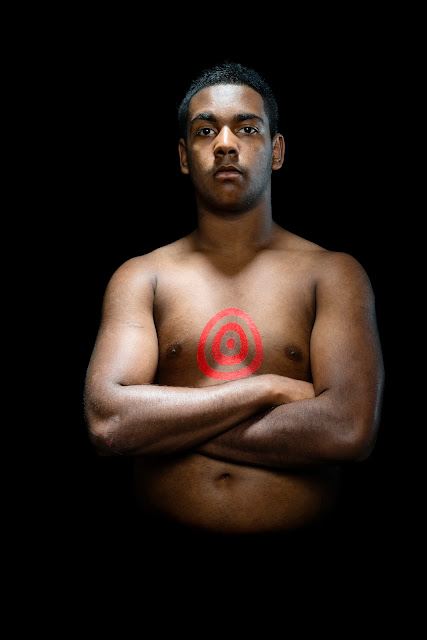 Tony Albert, Brother (Our Present), 2013, pigment print on paper, 150 x 100 cm, edition of 3 + 2 A/P, image courtesy of Sullivan & Strumpf and the artist
Sydney’s Kings Cross was traditionally the territory of the marginalised demi-monde, notorious for its seedy strip clubs, sex workers of every gender, sailors on shore leave, drug deals, crooked cops and underworld ‘identities’ -- and artists. Today it’s more like a tense demilitarised border zone between the respectable beneficiaries of property boom gentrification and the ‘mad, bad, and dangerous to know’. Here, in two disused spaces in a gloomy subterranean carpark, far from the standard white cube of the art gallery as it is usually understood, is Alaska Projects. The current show, ‘Engender’, at this artist-run-initiative is appropriate to its gritty location. Curator Grace Partridge selected work by seven artists, mostly but not all Australian, to explore the messiness and malleability of gender. This would be interesting curatorial premise enough, but ‘Engender' goes further, forcing us to consider the sometimes uncomfortable intersections of gender, class, and race. To ‘engender’ is to cause something to happen: to give rise to, to kindle, provoke, trigger or inspire. In the current context of an impassioned, often irrational debate about the rights of same sex couples to marry under Australian law, diverted by the ‘no’ campaign into fear-mongering speculation about whether boys might be encouraged, or even required, to wear dresses to school, the notion of ‘engendering’ is indeed provocative: the kindling is well and truly alight.
The first work you see is Angelica Mesiti’s haunting ‘Nakh Removed’ (2015), projected on a large screen at the far end of the first level of the carpark beyond parked cars and metres of oil-stained concrete.  Hypnotic and trance-like, the video shows four women of Algerian, Moroccan and Tunisian heritage re-enacting a Berber dance that is traditionally performed by women at weddings and fertility-related ceremonies. Their long hair flies across the screen as they dip and bend, tossing their heads from side to side and around in dizzying circular patterns.  The work speaks of sexuality, fecundity and female power. Their pale shoulders emerge from darkness, white against black clothing. Loops and skeins of hair swoop and swirl, and their slowed-down movement evokes an ecstatic state. This is primal, powerful and extraordinarily beautiful; the work challenges western stereotypes of Arab women.

It was filmed in Mesiti’s Paris studio, removed from the North African cultural origins of the dance, so ‘Nakh Removed’ speaks, too, of the oppressive legacies of French colonialism. A migrant child who grew up in Australia speaking one language at home and another at school, Mesiti has always been interested in the slipperiness of language, how meanings elide, slide away, and elude our grasp as we move from one subculture to another. Her childhood experiences drew her to notions of ‘the other’, to those on the periphery. Similarly, her experiences as a foreign child trying to ‘fit in’ and to learn the unfamiliar linguistic and behavioural codes of a dominant culture drew her to alternative languages of movement and dance. An earlier work such as ‘Rapture (Silent Anthem)’ (2009) reveals her interest in ecstatic states: the video  appeared to show a crowd of young people transported by a religious experience: Mesiti actually shot the crowd in the mosh pit at a rock concert from a hidden vantage point beneath the stage, then slowed down the footage and removed the sound. Like Bill Viola, she has been able to make video a medium through which she is able to convey powerfully transcendent and inexplicable human experiences. Watching ‘Nakh Removed’ we are drawn into the trance-like state that the dancers themselves have entered. For just that moment, in the Stygian gloom of a carpark – surely one of the most sinister ‘non-places’ of the contemporary world – the membrane between peoples and cultures becomes just a little more permeable. 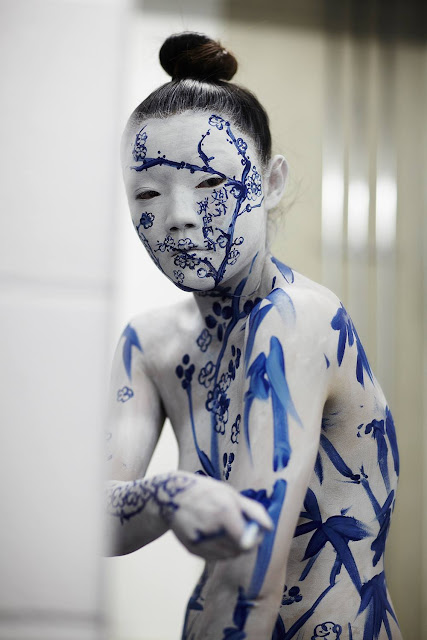 Echo Morgan, Be The Inside of the Vase, 2012, photograph by Jamie Baker
Image courtesy the artist
Performance artist Echo Morgan (Xie Rong) was born and grew up in Chengdu but now lives in London. Her work has often challenged a western gaze on Chinese women that positions them as the exotic, oriental ‘other’; in the process she subverts traditions of ink painting and porcelain production. Three photographs in this show document ‘Be the Inside of the Vase’, a work performed in London in 2012 and documented by photographer Jamie Morgan. Without the performance these beautiful images may be read as a self-reflexive examination of Chinoiserie, a positioning of a Chinese body for a western gaze. The naked artist, completely painted white, has painted herself with a blue and white porcelain pattern of bamboo and cherry blossom. A branch of blossom travels across her face, covering her mouth and silencing her.
The title references a saying in which a beautiful women is likened to a vase – fragile, smooth, and, presumably, hollow. Morgan’s abusive and emotionally volatile father, a gangster who operated in the grey areas of the 1980s Chinese economy, ran nightclubs, brothels and casinos, collected stolen porcelain; he demanded that his daughter appear decorative and expensive. Her strong and resilient mother, in contrast, told her not to be like the surface of a pretty, empty vessel, but instead to be like the inside: ‘Be the quality!’ The beauty of the photographs belies the much darker content of the performance from which they came. Divided into two ‘chapters’, the first part deals with Morgan’s fraught relationship with her father, and the conflict and violence of her childhood. Morgan said, ‘The first story [Million Dollar Baby] began with my father’s attempt to commit suicide. He owed everyone money.’
In the second part, ‘Break the Vase’ the artist is shown inside an enormous vessel made of paper and bamboo; we can only see the top of her head. She invited the audience to throw water-filled balloons at her in order to ‘break the vase’; at first a seemingly innocent action, this soon became openly aggressive as the paper vase broke apart and the missiles smashed into the artist’s face. Morgan’s nude body, painted in blue and white to resemble Song Dynasty porcelain, is gradually revealed: the simmering undertone of violence becomes explicit and dangerous, the audience is complicit. Juxtaposing English narration with Chinese traditional songs, Morgan plays with her complex hybrid identity and her difficult childhood. Like Mesiti, she is interested in translation: between two languages, between gesture and stillness, between performance and image. She is restless, moving between two worlds, between her Chinese past and English present. The seductive beauty of her painted self-image cannot conceal her pain.
Other works, in particular those by Liam Benson, Tony Albert and Angela Yu, add further depth and complexity to this curatorial narrative. Yu confronts the audience with their voyeuristic impulse in ‘Prudish Boulder’ (2016). The artist’s nude body is seen from above, immersed in a bath filled with flowers and herbs. She becomes a rock, the ‘boulder’ in the title, a witty acknowledgement of how women have been so often represented in art as feminine ‘nature’ to masculine ‘culture’. Like Mesiti, Morgan and Yu, Benson plays with beauty and its inverse in ‘The Executioner’ (2015). A large photographic print shows the bearded artist, hooded, unflinchingly meeting our eyes. His executioner’s hood is completely transparent, made of gauze: this is not the identity-concealing black shroud of power, granting the perpetrator of judicial killing anonymity and, perhaps, absolution. Beaded, adorned with pearls and embroidered with flowers, the hood is instead rendered seductively beautiful. It is frivolous, charming, and verging on the absurd. Yet Benson’s watchful gaze through eyeholes outlined in beading engages us directly, forcing us to question past narratives of identity and historical acts of injustice.
Tony Albert’s ‘Brother (Our Present)’ (2013) continues his ongoing examination of how indigenous Australians have been represented and misrepresented, often subject to violence and police brutality. The work emerged as a direct response to an incident in Kings Cross in which young Aboriginal boys involved in a Saturday night car accident were shot by police. In the resulting community anger and distress, Albert saw a group of young men arrive at a rally shirtless, with targets painted on their chests. He was struck by their combination of defiance, vulnerability and pride, and made a series of portraits in their honour. Albert collaborated with a Sydney hostel that provides accommodation for Aboriginal young men and boys while they complete their schooling, shooting portraits that evoke the otherworldly chiaroscuro of Caravaggio, yet also recall 19th century ethnographic photographs of Aboriginal people in which they are viewed as specimens for scientific examination, rather than as fully human.
Each of the artists in this interesting and prescient show navigates complex and contested identities and contemporary divides between race, class, language and gender; their work is both tender and brutal, beautiful yet deeply disturbing, and each reveals both vulnerability and strength.


Featured artists include: Tony Albert, Angelica Mesiti, Liam Benson, Get To Work, Echo Morgan, Angela Yu and Archie Barry.
Posted by An Art Teacher in China at 2:40 AM