上海日记 Shanghai Diary: A Revisionist History and the Mandate of Heaven

After Beijing, and a somewhat ill-fated trip to Guilin that featured a hideous hotel; food poisoning; a gazillion pushing, shoving, spitting, shouting tour groups following young women with flags and megaphones; and a trip along the admittedly beautiful Li River being lectured by the very dutiful guide I had hired to organise the details of boats and cars ("The government has completely solved the problem of pollution, the water is completely safe for swimming!"- yeah, sure), it was so good to return to Shanghai. Toilets that flush! Fabulous food! A seamless transition from Hongqiao Station into a taxi! Even the notorious Shanghai traffic was better than usual, and after 45 minutes zipping along those Jetsons-style futuristic elevated freeways I breathed a sigh of relief to see familiar Deco Gothic spires and emerge onto Huaihai Lu and then a tangle of smaller streets. 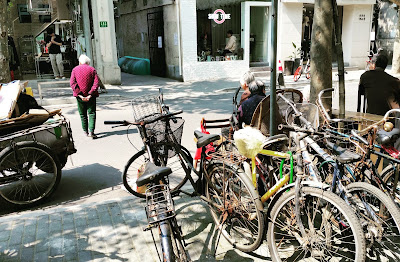 The Guilin adventure had its moments, for sure. The landscape is extraordinarily beautiful, and the trip down river was relaxing in a soporific way, despite the convoy of crowded boats. The old towns around Yangshuo - although most are not so much old as 'old', with reconstructed stone and timber houses and alleyways filled with red lanterns - were quite lovely, whether real or fake. I was the focus of much good-humoured curiosity from locals in a few villages, especially from old ladies chatting as they squatted in old-style rural Chinese toilets (i.e. no doors and long communal troughs.) To see how the laowai would pee was obviously a matter of great curiosity. All I can say is, you can get used to anything. Guilin itself - or what I managed to see of it before I was confined to the hotel room for two days after an unwise restaurant choice - is ridiculously pretty.
But, oh Shanghai, how I love you! I love your plane trees, your Art Deco, your ridiculously tiny shops selling preposterous shoes and glittery clothing, your good coffee, your cool boys nonchalantly smoking while steering their motor scooters, your young girls singing to themselves while they ride along on their bicycles, your glamorous women striding in their stilettos, your old men playing cards in Fuxing Park, your gatherings of ballroom dancers at night in the small park on Huaihai Zhong Lu. I love the Huangpu river seen from high above the Bund, and even the ridiculous Oriental Pearl Tower.
I love your quilts and underwear hanging out to dry on every post and powerline, your grumpy old ladies, the uniquely Shanghainese habit of wearing flanellette pyjamas as streetwear, your dumplings and xiao long bao. The remaining shikumen stone gate houses are lovely, and it's taken me a long time to figure out how to find addresses in the longtang laneways, but now I know how to do it I love that too.
On my last day, exiting Fuxing Park, a young Chinese man asked me if I knew where a particular small hotel was. And I did! And I managed to direct him in Chinese (only having to run after him once to say that I meant turn right, not left.) I knew because I had stayed there two years earlier (very weird) and probably he asked because he thought the only foreigner in sight may well be staying nearby, but I was ridiculously pleased with myself nonetheless.
I was last in Shanghai for a few days in mid-December, and before that at least once every year since 2011. I remember writing that it was a tough, tough city; in fact, with shamefully purple prose I described it as a 'snarling beast, a jabberwock'. What was wrong with me? Why has it taken me years to learn to love Shanghai as much as I love Beijing? I take it all back. Certainly, every city appears different in Spring than in mid-Winter. And Shanghai in Spring is gorgeous. So this time, I wandered, I found new corners, streets and alleys of the former French Concession, I made my way to every possible gallery, and I saw Song Dong's exhibition at Rockbund Museum,I Don't Know the Mandate of Heaven'. I ate noodles and dumplings. I was in heaven myself, a little delirious after being ill and miserable in Guilin.
I started this post intending to write a serious analysis of the art I saw in Shanghai, but it seems I've got a little sidetracked. Soon I will write about the artists I encountered in galleries large and small: Song Dong, Xu Bing, Lu Yang, Liang Shaoji, Hu Liu, Chen Yujun, Yin Xiuzhen, Hong Hao and many more. I discovered a new and wonderful painter at the Yuz museum, and unsurprisingly I detested the extremely popular 'Kaws' exhibition. But you will have to wait till next time to find out why

Posted by An Art Teacher in China at 5:46 AM