九牛一毛: The Nine and the One: Art in Shanghai

It's taken a while for the art I saw in Shanghai last month to percolate and for the sediment to settle: images and moments continue to drift in my mind. Meeting artists Lu Xinjian and Shi Yong, and talking with Monika Lin over coffee at the Old China Hand Reading Room about her new body of work, 'From the Bones of the Fish' (watch this space!) Walking to galleries through the tree-lined streets of the former French Concession. The shock of the new on the West Bund. A (somewhat) revitalized M50. Some spaces have closed, some were mysteriously dark, with rumours buzzing like flies, but Shanghai shows every sign of being at the centre of contemporary art in China - at least, at the centre of where the money is right now.

A classic China moment: I wanted to see a curated group show at a certain very high-profile commercial gallery. It was a Saturday afternoon, and it should have been open. Arriving at the address, I found the door mysteriously locked. A bored guard, dozing over his jar of tea, got up and opened the door, and realised I was in the middle of a fashion shoot, with the paintings as backdrops. The guard assumed that any strange foreigner arriving at the door (no matter my less than fashionista appearance) must somehow be connected. The models, photographers, lighting technicians, make-up artists, hairdressers and runners completely ignored me, so I stayed tolook at the paintings by the light from my mobile phone.
Now, though, to the sublime, the wonderful, the surprising -- and, frankly, the absolutely awful: 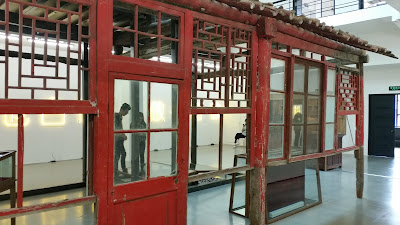 The sublime category absolutely belongs to Song Dong and his survey show, 'I Don't Know the Mandate of Heaven', at Rockbund Museum. Five floors of work from the last four decades was quite stunning - and often very moving. Song's re-purposing of architectural fragments and obsolete objects was much in evidence - an insistence, as Rauschenberg said, on working in ''the gap between art and life.'' More about this important exhibition later. 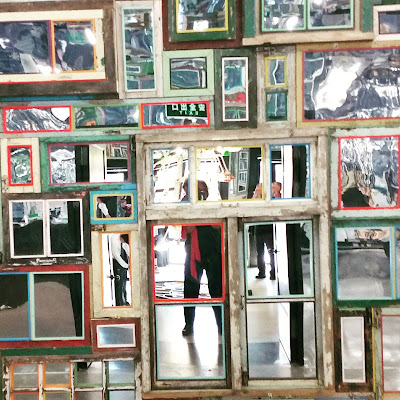 While not quite at the Song Dong level of jaw-dropping wonderment, six other shows/artists/galleries provided intrigue, curiosity, astonishment, and moments of reflection.
He Xiangyu, 'Turtle, Lion and Bear' at Qiao Space was a disconcerting and very moving installation of 25 screens in a darkened space, featuring people in the act of yawning. It's infectious - you cannot not respond with your own yawns - the link between artist, artwork and viewer is complete. There was something quite magical about this sense of shared humanity. 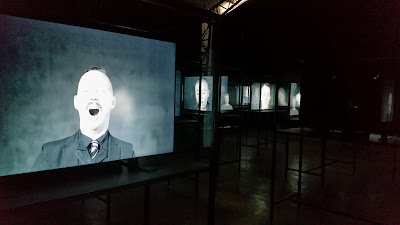 Two exhibitions at ShanghART's new West Bund space fof work by Liang Shaoji and Hu Liu were filled with young student photographers on a Saturday afternoon. These two artists, on the surface so different, are linked by their focus on a very limited and highly specific choice of materials: Liang Shaoji works with silkworms and their silken cocoons, creating immersive sculptural installations,while Hu Liu works with pencil and graphite. Every work takes months, and she uses thousands of pencils on a single large drawing. When you look from different angles they catch the light and what at first appeared as entirely black and featureless reveals itself to be immensely detailed.
At Bank/Mabsociety Chen Yujun's exhibition was intriguingly titled 'The River Never Remembers, the House Cannot Forget'. Working across multiple forms and navigating different conventions, Chen's work is focused on diasporic experience and personal memory. Like Song Dong, he is interested in the connections between people and the architecture they inhabit, often vernacular and makeshift, even chaotic, yet imbued with the experiences of generations.


Lu Yang, breaker of taboos and too cool for school, is always fabulous, and 'Delusional Mandala' in an exhibition of young new media artists 'Three Rooms' at Chronus Art Centre did not disappoint. I am rarely willing to stand in uncomfortable, cold gallery spaces on hard floors and watch long artist videos, but I watched this one twice, all the way through. Here's a snippet to tantalise, with commentary, from M Woods Museum in Beijing: 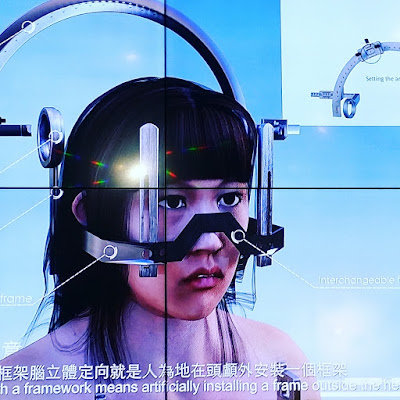 Yin Xiuzhen, Xu Bing, Hong Hao, Chen Yujun and a group of interesting artists in 'Collage: The Cards Players' (sic) at the Shanghai Gallery of Art, provided some strange and unexpected juxtapositions. I was delighted to see another iteration of Xu Bing's 'Background Story' series, where apparent traditional Chinese landscapes are created,not with ink and brush, but from rubbish and debris attached to a backlit screen. 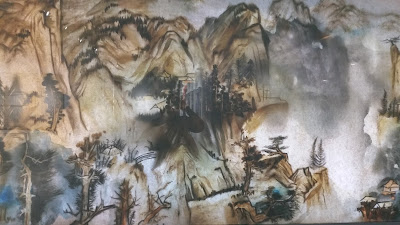 All the above artists are represented in the White Rabbit Collection of Contemporary Chinese art in Sydney - so here's a disclaimer: This blog is unconnected, it's a collection of my entirely personal views and general ramblings and ravings: my discovery of exhibitions featuring these artists was purely serendipitous. And how wonderful that Sydney audiences have the opportunity to see their work in the curated shows at White Rabbit Gallery.
Another discovery provided much needed balm for a great disappointment. On a previous visit the Yuz Museum had been closed, so I was hoping this time to see some of Budi Tek's reputedly very interesting collection. Instead, as perhaps I should have been able to guess from the surprising lines of teenagers and 20-somethings snaking around the block to buy tickets ("How wonderful that they love contemporary art!" I foolishly thought), I was confronted with a museum filled with the vapid 'sculptures' of American graffiti artist, product designer, graphic designer, sculptor and toymaker, KAWS described thus: "His art stands somewhere between fine art and global commerce. KAWS moved beyond the sphere of the exclusive art market to occupy a more complex global market." Really, enough said. This guy makes Damien Hirst look very, very deep. 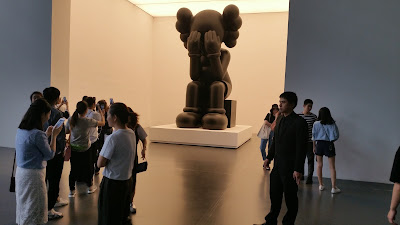 After this disappointment, I entered a dimly lit upstairs space to be immersed in the meditative abstract paintings of Zhao Li, in her first solo exhibition for many years. Floating shapes hover on soft grounds of grey, or vivid red and pink. Linear forms overlapping and coalescing suggesting the constant rhythms of the universe and the human body. Zhao is interested in Daoist thought, and the push and pull of yin/yang binaries are evident in the juxtaposition of line and form in these compelling paintings. I was seduced - and calmed - post KAWS. 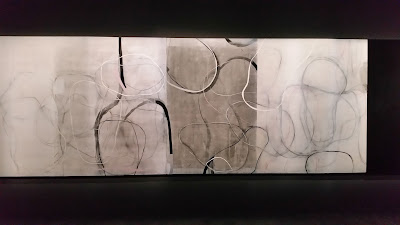 The exhibition text is, not unusually in China, full of emotive phrases like this: ''Reasonable romance and bold elegance can both be seen in her works.'' I may be obtuse, but I have no idea what reasonable romance is. But these paintings are absolutely, stunningly, beautiful. Painting in China is alive and well, and if April's crop of exhibitions in Beijing and Shanghai are any indication, it is holding its own amongst the new media, photography, augmented/virtual reality, sculpture and installation. 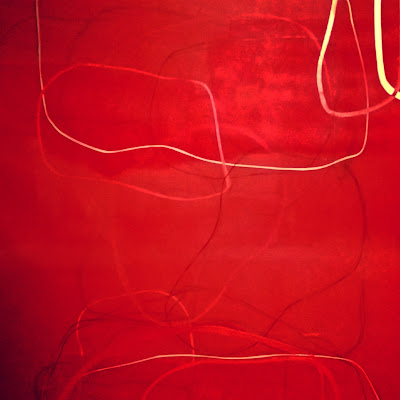 A ratio of nine strong exhibitions to one that was just silly and shallow  - actually, that's not bad. And there's even a Chengyu, a four character idiom, that fits the situation: ''nine cows, one strand of hair''

(九牛一毛 - jiu niu yi mao) refers to something so small and insignificant that it's like one strand of hair in amongst nine cows. Or something.

Posted by An Art Teacher in China at 6:21 AM