I've been a long time away from this blog, regretfully: writing full time about Chinese contemporary art, and (because, clearly, I'm insane) undertaking a PhD on top of that full-time job has taken all the time I have. There are not enough hours in the day. Sometimes lately I have to remind myself to breathe. But....
An event last week in Sydney is not something that I can let pass without comment. Vermilion Art bravely showed the first exhibition of Chinese women artists in Australia, curated by former Australian Ambassador to China, Geoff Raby. I say 'bravely' because the history of all-women exhibitions inside and outside of China is contested and complicated. And I say that, too, as someone who has curated one: 'Half the Sky' at Beijing's Red Gate Gallery in 2016 was an exhibition I organised with Tony Scott to coincide with the launch of my book of the same name. I had decided that the only possible curatorial premise was a very simple one: a selection of interesting work by women who featured in my book. I did not apply any over-arching conceptual premise to connect them, although several possible themes and tendencies did emerge. Most of these were ignored by reporters, though, who only wanted to ask me about my views of the 'leftover women' phenomenon and what people in Australia thought of it.Sigh.

In the 1990s in China there were a number of all-women exhibitions that left artists a little bruised and critics a little bemused. The reasons are sufficient for a whole doctoral thesis, but suffice it to say that one artist said to me, 'They don't have exhibitions and call them "exhibitions of mens' work", they're just exhibitions! Why should women be any different?' I don't agree with this, because of course the point is that there are still far too few women artists represented in the big curated shows - including the dismal statistic of 9 women in more than 72 artists in the recent Guggenheim exhibition, 'Art And China After 1989: Theater of the World'. But the conundrum of 'nüxing yishu' (womens' art) and what the term might imply is at the heart of my own research. Like everything else in China, it's complicated.

At Vermilion Art, though, 'Sworn Sisters' navigates these potential pitfalls in interesting ways, presenting the work of 9 very diverse artists who yet strangely complement each other. Xiao Lu, whose reputation as a 'bad girl' was forever cemented by her notorious performance in 1989 at the China/Avant-garde exhibition in Beijing, when she fired a pistol into her own installation, is represented by photographs and video of a recent performance work. No less transgressive, this performance resulted in a serious injury to the artist's hand as she cut and hacked her way out of a block of ice which gradually became stained with her blood.
'Polar' is one of a series of recent performances that employ ink, water and ice - and sometimes all three at once. They follow some years of the artist's struggle to come to terms with childlessness, menopause and ageing. Xiao underwent 'Tui Na' massage and wrote Tang Dynasty poetry with medicinal herbs, practising calligraphy every day and immersing herself once more in Chinese aesthetics and philosophical traditions. Here, though, ink and water are used to quite different ends, in punishing durational performances which are often very beautiful, albeit sometimes  violent or self-destructive. The materiality of ink and water is particularly Chinese, and Xiao Lu is intentionally referring to the yin and yang binaries of Daoist philosophy. In the work below (not shown in  the exhibition), frozen blocks of Chinese ink and water slowly melted and dripped over the white-robed figure of the artist, with photographs of the earlier blood-stained performance in the background.

The title of the exhibition alludes to the semi-secret 'women's language' of Nüshu, a script form once taught by mothers to their daughters in remote villages of Jiangyong County in Hunan Province - and, incidentally, another key element of my PhD research. Nüshu was used to embroider poems onto fans, belts, and into 'Third Day Missives', books given to young brides by their 'Sworn Sisters' as they left their parents and their village for an uncertain future. Men could not read Nüshu, and, according to the scholar Fei-Wen Liu, were not tempted to try: it was scorned as a vernacular for mere women, confined to the home, their feet bound, and denied education. It is tempting to think that the work of these contemporary artists is another kind of female coded language, similarly designed to represent aspects of female experience.

Other works in 'Sworn Sisters' include a print of one of Chen Qingqing's ethereal robes made of dried grasses, and a Joseph Cornell-style weathered timber drawer containing a little naked plastic doll, her blonde head weighed down as if by the intolerable weight of memory. Called The Long March (2014), it recalls Qingqing's own dramatic life story: sent away from her family to cadre school during the Cultural Revolution she drove tractors, worked as assistant to a barefoot doctor, and much later became a corporate executive working in Germany, before returning to China to join the burgeoning contemporary art movement centred on the 798 art district. You can see my story about Qingqing here:Between Memory and Metaphor 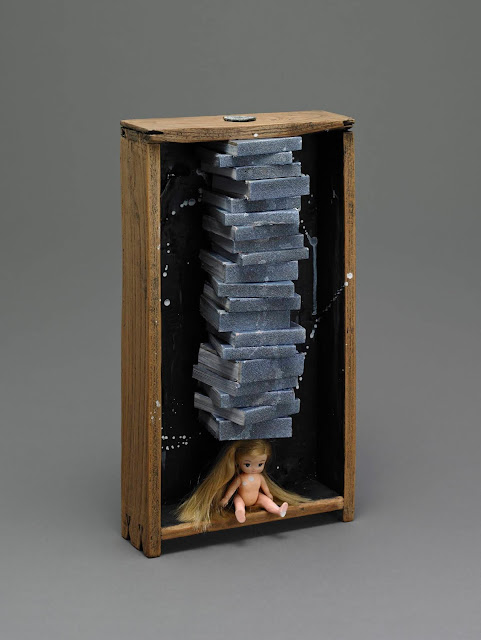 It is wonderful to see more work from rising star Geng Xue, following the popular triumph of her installation and animation Mr Sea at White Rabbit Gallery in 'Ritual Spirit', an exhibition of her works on paper in the last show at Vermilion Art, and her selection for the Biennale of Sydney, where The Poetry of Michelangelo has been showing at Artspace. The conceptual artist is represented here by two earlier porcelain works; they are delicate and ethereal and I was immensely relieved that somebody in the enormous crowd on the opening night did not somehow back into their vitrines and destroy them!


My current obsession is focused on contemporary adaptations and reinventions of Chinese ink, so I particularly enjoyed seeing Cindy Ng's works here. Surprisingly, it was in the British Museum's Chinese rooms that this Macau-born, Beijing based artist first explored the traditions of Chinese ink painting, while she was studying in London. In 1996, Ng moved to Taipei to continue her studies in contemporary ink painting and held a solo exhibition at the Taipei Fine Art Museum, before later moving to the mainland to live and work in Beijing. Her work is rooted in her knowledge of Song Dynasty ink painting, but in her paintings, videos and photographs ink is freed from its history as a vehicle for imagery - she experiments with digital forms, and new media as well as painting. Having  seen Cindy Ng's work in a Shanghai gallery in 2011, when I was first beginning to study and write about Chinese contemporary art, I was delighted to see these beautiful works once again.

In his speech at the opening, which was attended by an astonishing 300 people, and included a performance by an opera singer and by artist Rose Wong, Geoff Raby said that his aim was to 'shatter stereotypes of Chinese women'. In a number of ways the works in 'Sworn Sisters' reveal women from different generations and  backgrounds who subvert gendered expectations of what 'womens' art' - and, indeed, 'Chinese art' - might look like. And that can only be a good thing.
Posted by An Art Teacher in China at 1:39 AM