The measure of all things: learning Chinese measure words

I'm re-posting a wonderful piece by Madeleine Thien from the Guardian, about measure words in Chinese. Having just finished 2 hours of Chinese homework that left me more than usually bamboozled and despondent, reading this made me remember how much I love this wonderful and infuriating language, where every character seems to have several possible meanings and one meaning can often be conveyed by several different characters. Measure words are the bane of the Chinese language learner but they give you a glimpse of a whole different way of seeing the world. I rarely remember the correct ones in conversation and resort to the foreigner's all-purpose 'ge'. But anyhow, read and enjoy. (And also read Thien's marvellous book 'Do Not Say We Have Nothing'). 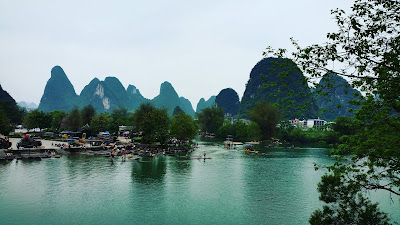 tiáo 条
How do we categorise or classify things, thereby imagining them as one thing and not another? Unlike French or German, gender does not provide categories in Chinese, which groups things by something else entirely: shape.
Tiáo is one of at least 140 classifiers and measure words in the Chinese language. It’s a measure word for long-narrow-shape things. For example, bed sheets, fish, ships, bars of soap, cartons of cigarettes, avenues, trousers, dragons, rivers.
These measure words embrace the ways in which shape imprints itself upon us, while playfully noticing the relationships between all things. The measure word kē 颗 (kernel) is used for small, roundish things, or objects that appear small: pearls, teeth, bullets and seeds, as well as distant stars and satellites.
Gēn 根, for thin-slender objects, will appear before needles, bananas, fried chicken legs, lollipops, chopsticks, guitar strings and matches, among a thousand other things. “Flower-like” objects gather under the word duo 朵: bunches of flowers, clouds, mushrooms and ears.
It’s endlessly fascinating to me how we attempt to group anything or anyone together, and how formations change. Philosopher Wang Lianqing charts how tiáo was first applied to objects we can pick up by hand (belts, branches, string) and then expanded outward (streets, rivers, mountain ranges).
And finally tiáo extended metaphorically. News and events are also classified with tiáo, perhaps because news was written in long vertical lines, and events, as the 7th-century scholar Yan Shigu wrote, arrive in lists “one by one, as (arranging) long-shaped twigs”.
Onwards the idea broadened, so that an idea or opinion is also “long-shaped news,” and in the 14th century, tiáo was used for spirit, which was imagined as straight, high and lofty. In language, another geometry is at work, gathering recurrences through time and space.
The whole article can be seen HERE
Posted by An Art Teacher in China at 5:29 AM