This is not a List: My Year in Chinese Art

As I've been swimming my (very slow) laps of the local pool over successive lazy Christmas holiday days, the splashing of the water drowned out by the relentless hum of cicadas, I've been thinking back over the year's highs and lows, achievements and regrets. In particular, as I drag myself up and down the pool, I've been remembering inspiring encounters with Chinese artists, and with their work seen in galleries, museums and studios. This year I've also had many opportunities to share ideas about Chinese contemporary art in some strange and wonderful locations. It would be impossible to rank these experiences into a 'Best of 2018' list, so what follows is a highly personal stream-of-consciousness musing on the year behind us.

During an April trip to China I was invited to speak on a panel at the Yenching Global Symposium at Peking University (better known as Beida), talking about the generational differences between older and younger artists in China, and my thoughts about how Chinese art has changed in the last 20 or 30 years. Moderated by Kaiser Kuo, founder of the Sinica Podcast and editor at SupChina - and a rock star/writer/broadcaster/provocateur whom I have admired for years - it was an initially nerve-wracking but ultimately exhilarating experience. In the same week I gave a talk in the odd but beautiful surroundings of the Dongyue Temple Art Museum to a mixed Chinese and non-Chinese audience, and then to a large group of students at China Women's University, where I spoke about my book 'Half the Sky'. 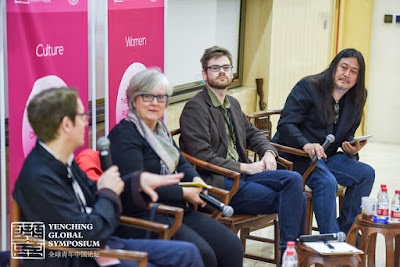 In Beijing, observing the constant reshaping of the city, the bricking-up of ramshackle bars and shops, the 'greyification' of the hutongs, and the dramatic changes seen even in my regular haunt of Xingfu Cun Lu and its little shops and restaurants, I travelled to meet artists every day, recording interviews for the White Rabbit Collection/Judith Neilson Archive. From young artists Chen Zhe and Geng Xue to pioneers such as Wang Jianwei and Feng Mengbo, every conversation was filled with rich and often unexpected treasures of information. Seeing the scale of Sun Xun's studio production was fascinating, especially following the exhibition of his extraordinary 'Republic of Jing Bang' at the White Rabbit Gallery, and prior to his major exhibition at the Museum of Contemporary Art, Sydney. Surrounded by ink drawings of life-size characters in the feature-length film he and his team are working on, we talked about art and life, and his journey from the sooty, smog-filled northern coal-producing city of his birth to the art academy in Hangzhou, and to his current life as a globe-trotting artist. 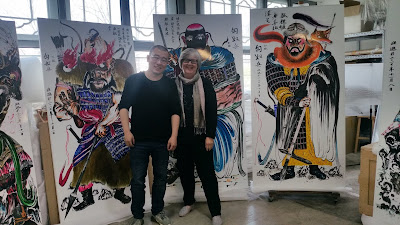 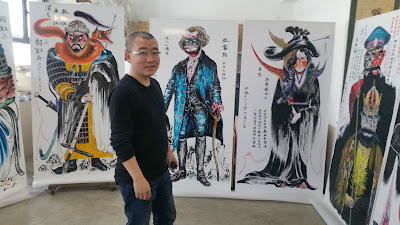 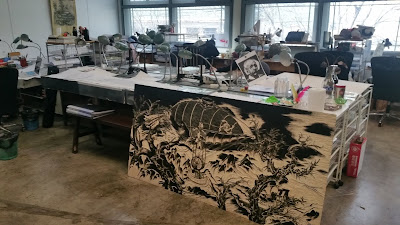 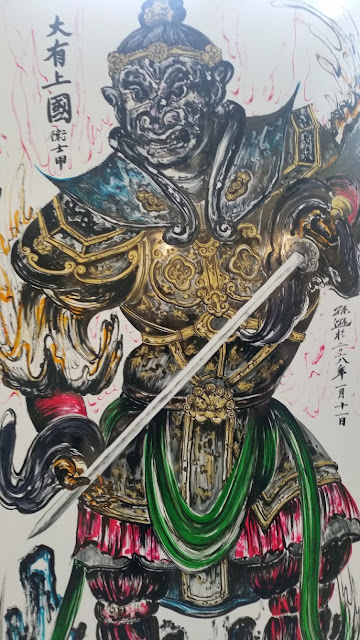 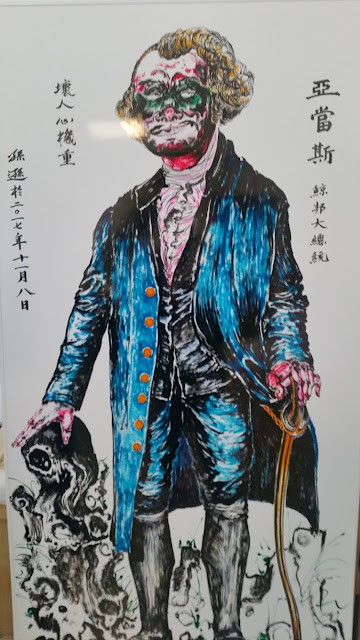 One rainy afternoon was spent recording a two-hour conversation with Shang Yang, discovering his slow-burning anger at the destruction of the Chinese landscape and the pollution of its air, soil and water in the name of 'progress'. For me, artists like Shang Yang represent the extraordinary resilience of the Chinese people: punished for years for his support of students in 1989, stripped of his teaching position and other roles and honours at Wuhan University, he continued to work, and remained steadfast and uncompromising in his subject matter. Now in his 60s, Shang had only two solo exhibitions in China until his New York show in September. I wrote about that exhibition for The Art Life - click HERE if you want to read more. 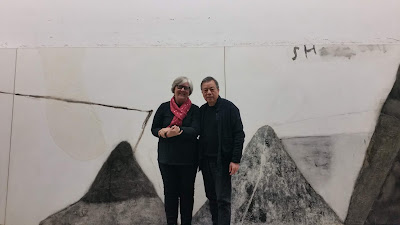 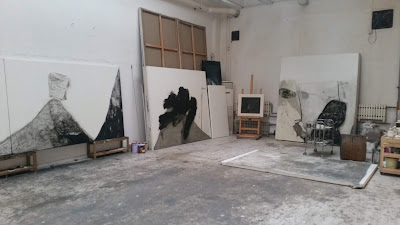 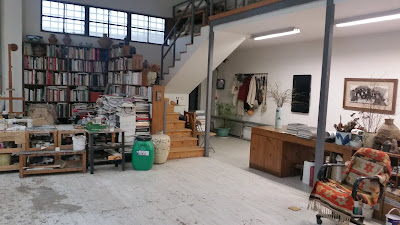 The drive back from Shang Yang's studio to the northern centre of Beijing was hair-raising in a violent thunderstorm, the streets running with deep water and the traffic a cacophany of blasting horns and shouting drivers. After three hours in the car, and already quite dark at 7.00pm, my driver reluctantly agreed to let me out as soon as I vaguely recognised the surrounding geography, so I could walk the rest of the way. The next morning he told me it had taken him another three hours to get home.

Perhaps the biggest thrill for me in Beijing, though, was meeting Xu Bing. I had taught students about his work since discovering his 'New English Calligraphy' installations at the Art Gallery of New South Wales in the late 1990s, and I was completely overwhelmed when I saw his two enormous phoenixes hanging in New York's Cathedral of St John the Divine in 2014. In contrast to the arrogance that often accompanies art megastardom (no names, no pack drill) Xu appears humble and unassuming, talking readily and revealing an ironic sense of humour. After our long conversation about his film 'Dragonfly Eyes' we drank beer and ate spicy noodles at his local Sichuan restaurant in a shopping mall near the studio. 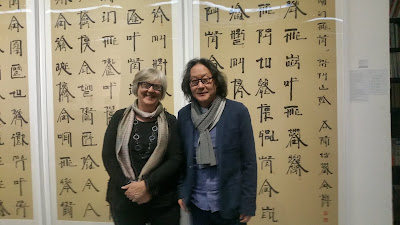 Of all the exhibitions in Beijing galleries large and small, two standouts were Liu Wei's monumental installation and Zhu Jinshi's 'Ship of Time', now in the White Rabbit Collection, at Tang Contemporary. Both were extraordinary and breath-taking, dramatically defining the exhibition space. At Long March Space Liu's mechanical planets slowly orbited the room and I could not tear myself away. 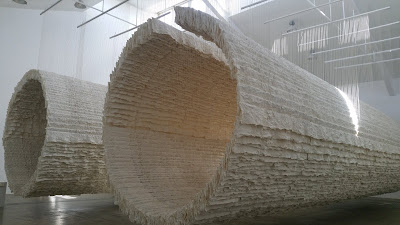 The next week, in Shanghai, my encounters continued, in studio visits with Jin Feng, Ni Youyu, Liu Jianhua and Chen Yujun. Once again I had the opportunity to meet an artist whose work I had taught since the 1990s. Gu Wenda was fortuitously in Shanghai and we were able to meet at his studio. I confess that at moments like these I feel as if I am inhabiting someone else's life - it is such a privilege to be able to engage these artists in conversations about their life and work. And what extraordinary stories I get to hear! Gu Wenda told me about his studies with Maryn Varbanov in Hangzhou, about his work being banned from an exhibition in Xi'an in 1986, and about his early days as a struggling Chinese artist in New York, as well as about his commissioned work for the White Rabbit Collection, a series of marble rocks inscribed with hybrid, partly invented characters relating to the 24 seasons of the traditional agricultural calendar. 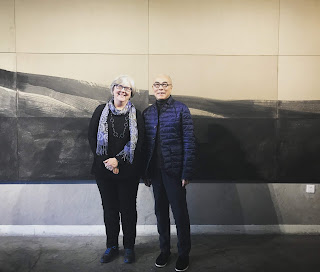 In many years of meeting Chinese artists I've seen a lot of remarkable and impressive studios, but Chen Yujun's transformation of a cavernous former factory has created an especially calm and beautiful space - old, weathered doors and windows rescued from demolition sites have been used to partition the enormous concrete spaces into areas for working, exhibiting, reading, chatting and drinking tea. 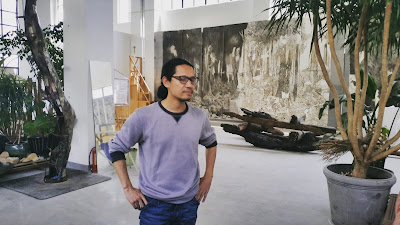 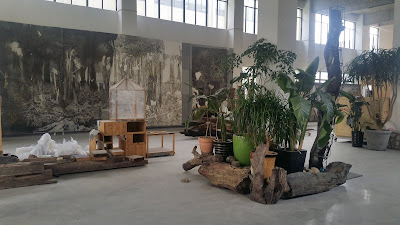 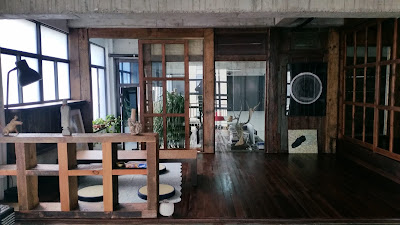 I enjoyed a long talk with Liu Jianhua about his use of porcelain. My last encounter with Liu was when he led the 'Everyday Legend' Research team on a field trip to Jingdezhen, where he had worked and studied from boyhood. To see the website of this research project, funded by the Leverhulme Trust, click HERE. 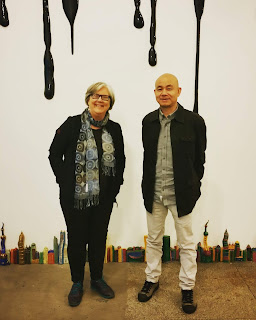 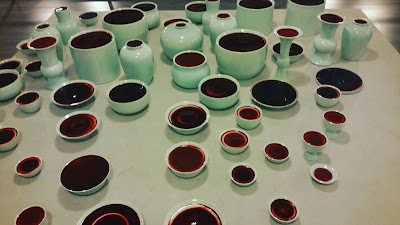 Of all the many exhibitions seen in Shanghai, I especially loved Yang Shen's 'Garden Oddity' at MadeIn Gallery: surreal juxtapositions of images drawn from cartoons and children's textbooks, sci-fi comics and animations and the strangest depths of the artist's imagination. 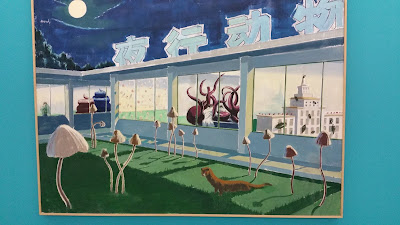 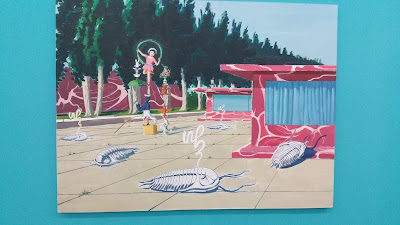 Back home, work continued on the establishment of the new Dangrove White Rabbit Collection Research Library and the archive, which has been a joy and a delight; I am lucky to work with a fabulous team of colleagues in a beautiful space. We welcomed our first groups of students from various universities to engage directly with the objects in the collection and the archival materials provided by its artists, and continued to film interviews with artists visiting Sydney, including Gonkar Gyatso, Wang Guofeng, Cao Hui, Sun Xun, Yang Wei-Lin. and (forthcoming) Hou I-Ting, Guo Jian and Gao Xiaowu.  The wonderful painters Yu Hong and Liu Xiaodong brought piles of books and catalogues for the library when they arrived in town for a ceremonial switching off of Liu's 'painting machine' installation at White Rabbit Gallery.  Liu Xiaodong's interview can be seen HERE on the White Rabbit Collection Vimeo site, where you will also find many others. 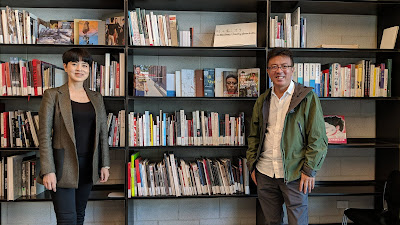 Later in the year, in New York, I visited Lin Yan in her Long Island studio, went to the launch of Barbara Pollack's new book 'Brand New Art from China' (and greatly enjoyed my conversations with her), and saw exhibitions of Zhang Xiaogang, Shang Yang, and Liao Guohe. The Guggenheim show from young star curator Xiaoyu Weng featured Cao Fei’s evocation of a post-human future, Wong Ping’s fabulously eccentric digital tale of an elderly porno addict and new works by Lin Yilin, Samson Young and Duan Jianyu. The famous koan, ‘one hand clapping’, says the Guggenheim, is a metaphor for how meaning is destabilised in a globalised world. 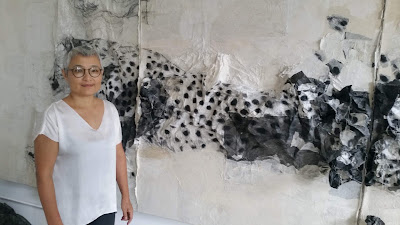 Now, on the first day of a new year that we all hope will be kinder and less crazy, albeit perhaps without too much optimism, I think about how lucky I am to spend so much time with artists. Art continues to matter in this scary world. To finish with a quote from art critic Jerry Saltz:
"Thank you all the artists I’ve ever known who made me think the way I think."
Posted by An Art Teacher in China at 5:51 PM