In this time of isolation, anxiety, and various kinds of sorrow both deeply personal and globally shared, a time that Nick Cave described in his newsletter as making us 'become eyewitnesses to a catastrophe that we are seeing unfold from the inside out', writing is something that I and many others are turning to. For some that takes the form of a diary or frequent social media posts, for others it might be letters to friends and family. For me and other suddenly unemployed writers it's blog posts like this one. Whatever form they take, they are all  like letters in bottles cast into the ocean. The days seem very long, and somewhat shapeless, recalling the Chinese idiom: ‘One day, a thousand Autumns’.
Looking back over this blog since I began writing it at the end of 2010, I suddenly remembered the optimism and unfettered joy of my earliest trips to China. That astonished desire to exclaim, like Dorothy in the Wizard of Oz, ‘Well Toto, we’re not in Kansas anymore!’ is something I’d love to recapture. I had been so looking forward to taking my two grown-up daughters to Shanghai for their first experience of China, before Covid-19 brought the world as we knew it to a screaming halt. I am still hoping to do that eventually, although the news of China closing its borders to foreigners this week sent a chill down many spines, virus or no virus.
I’ve been looking back at my travels, to a time before they mostly became work trips for the job I have now lost – a sudden and unexpected redundancy that has profoundly shaken me, even in the midst of global turmoil. I’m hoping to regain my old adventurous spirit in the future as an independent writer and researcher, untrammelled by external strictures and obligations.

So, aiming for optimism and planning a new future even while living day to day, as we all now must, here are some of the things I love about China – and about Beijing in particular:


There is a particular Beijing grey (and those who know me know that I do love grey!) It’s the grey walls of the hutong alleys and courtyard houses and their grey tiled roofs, echoed very often by grey and polluted air that makes those rare blue-sky days all the more miraculous.  Grey walls are offset by red doors and brightly coloured washing drying on lines, fences, or draped over powerlines – less so than in Shanghai where it used to be called ‘Shanghai flags’, but it’s still a thing.

'Beware lest suddenness happens' is one of my favourite 'Chinglish' warning notices (in the Beijing Zoo). And suddenness does indeed happen. Constantly. To follow the sound of music at 9 o'clock at night, enter the park and find more than a hundred people ballroom dancing in the dark. To come upon the water calligraphers still absorbed in brushing their beautiful characters onto the pavement at dusk. To round a corner in the park and find a man taking his songbirds in their cages for a turn around the lake. One morning I came out of the gate of my lane onto the street and found all the young real estate agents lined up outside their office with their hands on their hearts while the national anthem was played. This was quite a sight – they were usually fully occupied with lying across their motor scooters playing games on their phones, playfully pushing and shoving each other or vainly combing their hair and gazing into their mirrors.

And that brings me to the people. My first encounters were so open-hearted and generous, from the translator I hired who told me his English name was Stanley (‘Why Stanley?’ ‘Stanley Kubrick, of course, Miss Luise’) and constantly told me to wear warmer clothes, to the very young doorman at the hotel that I had booked in my complete ignorance of Beijing geography, on the wrong side of the city. Wearing a much too big PLA greatcoat and a battered fur hat he grinned each time I left and called out ‘Man zou ah!’ (Literally, ‘walk slowly’, but meaning ‘take care’.) Because Beijing was my first Chinese city, and because I made friends in that first six-week trip that I hope will be friends for life, it has seemed almost like home to me ever since. People are incredibly kind and open-hearted, and I hope that the recent, widely reported suspicion of foreign-ness will not change that.
I have always struck up conversations (in my sadly still non-fluent Chinese) with old men sitting out in the hutongs, with mothers watching their children in the park and – especially when my daughter was expecting her first baby and I was feeling very far away – with grandmothers wheeling prams or holding hands with red-cheeked toddlers bundled up in so many padded clothes that they look like miniature Michelin men. They were probably a bit bemused by the laowai’s unsolicited ‘I’m also going to be a grandmother!’ but they were always very kind. Dancing aunties ask me to dance with them in the park, singers explain the words of their revolutionary songs, and shopkeepers sometimes run after me with change I have forgotten or gloves I've left behind: all these encounters are woven into the threads of my memories.

And finally, of course, the food. It must be said that  food has figured largely in the fascination of my time in China. The visual richness of street vendors of all kinds was a feature of any walk in Beijing – sadly many have now been moved on or returned to far provinces – and the foods on offer changed as the weather changed. Tiny sweet clementines that I have never found anywhere else in the world, whole pineapples on sticks, pomegranate juice, grilled corn, chestnuts and walnuts, congee and pancakes and baozi, sweet potato sold from braziers, and cakes: Beijingers love their 'xiao chi' (literally, ‘little eats’, i.e snacks). 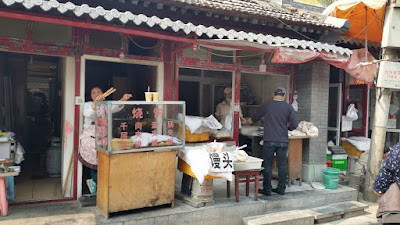 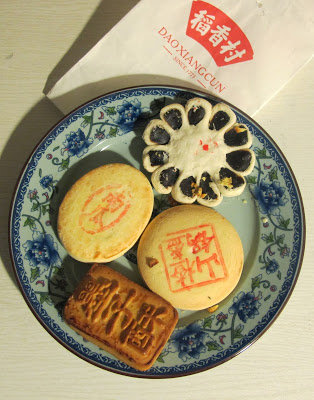 Beijing is changing – it is already a different city from the one I fell in love with ten years ago. The gentrification, the ‘Great Bricking’ that made the old hutongs that had teemed with life more blandly homogeneous, the closure of street markets, the removal of migrants who had flocked to the city from all over China and the loss of their tiny, flourishing businesses – hole in the wall noodle joints, flower shops, bicycle repair stalls, tailors and convenience stores – all this has made Beijing cleaner, certainly, but perhaps less interesting. But constant change is a given in China, and its people are nothing if not resilient and adaptable. I just hope I will see it again, and spend much more time there than I have been able to in the last five years of brief work visits.
I hope the terrifying children's rides are still there, too, but I fear all these little shops selling an extraordinary mixture of dongxi will be gone with the gentrifying winds of change. 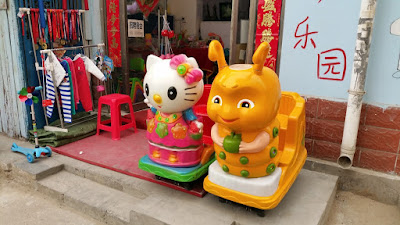 Just for the record, I’m pleased that my second-favourite Chinglish sign was still to be found in public toilets on my last visit. It says: "This is what I have been wanting to talk to you about. Please flush the toilet. You are the best."

Posted by An Art Teacher in China at 6:31 PM