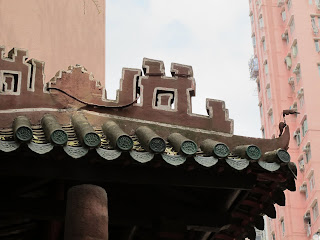 Temple, Wan Chai
On Friday in Hong Kong these stencilled images appeared in the subways of Kowloon and the streets of Central. I photographed them in the morning in Tsim Sha Tsui, as did many other people using their mobile phones. When I returned in the early afternoon a group of workmen were diligently covering them with white paper and sticky tape. Later still, I walked through the same subway to the Star Ferry Terminal and most of the paper had been ripped away. Passers by were again photographing them with their mobile phones. 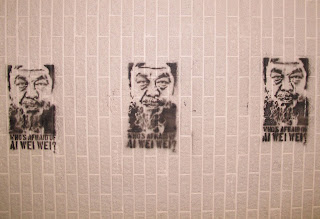 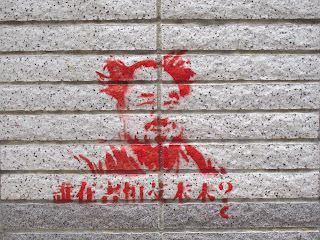 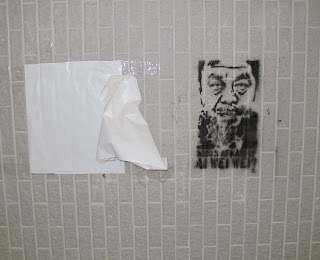 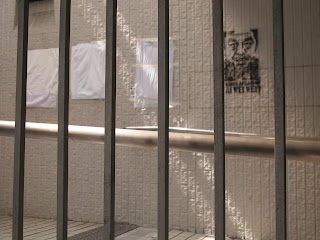 Redbox Review is worth following for news of Chinese contemporary art, as is the journal 'Yishu', which I first discovered last year in the San Francisco Asian Art Museum and which is now available online.
http://review.redboxstudio.cn/
http://yishu-online.com/
Although I arrived back home from China yesterday, I will endeavour to occasionally update the blog with observations, musings and random thoughts relating to China, Chinese art and artists - and of course I am already planning my next trip! There is too much that I missed, too many artists and galleries that I want to get to. By next time I hope my spoken Chinese (if not written - that would be just way too ambitious!) is much better.
I am reading a wonderful book, 'Country Driving: A Chinese Road Trip' by Peter Hessler, an American journalist who lived in China for five years and then got his Chinese driving licence, in 2001. His accounts of driving in Beijing, as well as in remote areas of China including Mongolia, are fascinating and often hilarious. In explaining that Chinese drivers are essentially rookies, he says "It's hard to imagine another place where people take such joy in driving so badly. On the open road it feels like everbody has just been unleashed from a hutong - there's a sudden rush of speed and competition, and the greatest thrill comes from passing other motorists. People pass on hills; they pass on turns; they pass in tunnels. If they get passed themselves, they immediately try to pass the other vehicle back, as if it were a game. From what I can tell, that's the only question on the written driver's exam with three correct answers:
77. When overtaking another car, a driver should pass
a) on the left
b) on the right
c) wherever, depending on the situation"
There were many times when, sitting in the back of a Beijing taxi, I thought I would never see my family again, so I can relate to this! He goes on to say that the questions on the driver's exam capture the spirit of the road (True/False: "In a taxi, it's fine to carry a small amount of explosive material")
In one of my trips out past Caochangdi to visit some artists' studios, the driver had to keep stopping to ask for directions from people riding bicycles and women pushing strollers on dirt roads. Eventually he drove off the road entirely and over a hilly demolition landscape of dirt and rocks. To my anxious question of, "Are you sure this is the way, is this OK?"  he gave the classic Beijing response, "Mei wenti!" This is the good-humoured Chinese version of "No worries, mate!" and you hear it a lot.
Here is Question 347 from the written driver's exam: "If another driver, with good intentions, warns you about something, you should
a) be open minded and listen carefully
b) not listen
c) listen and then don't pay attention to the advice 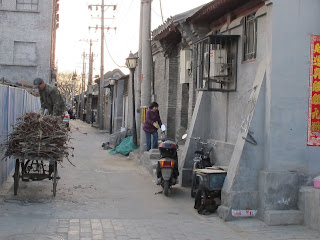 Beijing Street
Posted by An Art Teacher in China at 9:45 PM