It is hard to believe that this is the last morning that I will wake up and look out at the water traffic on the harbour - a constantly fascinating overlapping frieze of tug boats, ferries, wooden fishing vessels, cruise ships, barges and other industrial vessels whose function is a mystery to me. The mundane realities of life await! 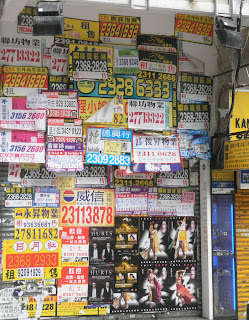 Kowloon Shop Front
My final few days in Hong Kong included a meeting with artist and social activist Jaffa Lam, visits to more galleries in Central and Wan Chai showing interesting work from the mainland (including the significant Schoeni Gallery, one of the first Hong Kong galleries to realise the significance of the new art from China) and a visit to a beautiful school, Hong Kong International School. 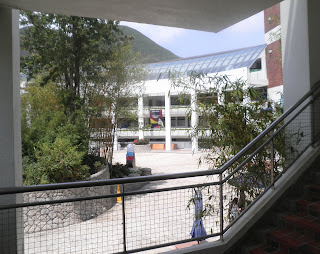 View of courtyard at HKIS
It will take time once I am at home to sift through all my notes and impressions from my school visits and to be able to make sense of what I have learned. I have spoken with so many teachers and students, observed students ranging from Year 2 to Year 12 (and tertiary art students) at work, and taken note of many aspects of the culture and practices of the different schools and systems. I have been interested in the ways that technology is being used in art classes, the ways that teachers design programs of study for the cultural and specific learning needs of their students, and also the ways that teachers and students engage with their mainland Chinese or Hong Kong environments. The level of teacher and student engagement with traditional and/or contemporary Chinese art has been a significant variable. It has been fascinating to note  the differences and similarities between the approaches at different schools. I have been so interested as well in the kind of art practice that results from different curriculum paradigms, as I have seen the final year works of students from the British, IB, NSW HSC, Hong Kong Education Board, Ontario Certificate of Education and American AP syllabuses while I have been away, as well as the work done by students in the local Chinese school in Shanghai. All these different approaches have their inherent strengths and weaknesses, but all encourage students to be thoughtful and reflective, and most emphasise the conceptual intention of the artworks as the significant driving factor in production.

At the Hong Kong International School there has been some discussion about the introduction of the IB, however the students are currently studying the American curriculum, which offers (in the High School, Grades 9 - 12) 2D and 3D Studio Art at three different levels, as well as the more rigorous and demanding AP course, in which students must complete 24 works, five of which are sent away to be externally assessed. Students upload their works to their 'student profile' page on the AP web site, together with comments about their practice and their intention. They must show breadth, but also select 12 works for a 'concentration' series, which should be connected through subject, concept or technique. The online student profile is interesting, as students edit and refine it through the course of their studies, before that final decisive moment of clicking 'submit'. There is also a significant component of school based assessment, and I enjoyed observing a 'critique' session where the students had their works in progress up on display and critiqued each other, with the teacher's guidance and advice. Their comments were constructive and often perceptive. This method of encouraging reflection on art practice, together with the student podcasts I observed at the Shanghai American School, the students constructing their own web sites to showcase their art practice at the Canadian School, and the blog learning journals at Beijing City International School, are definitely aspects I would like to follow up and consider implementing. 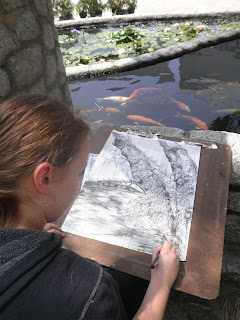 Student drawing goldfish pond in the garden at HKIS
In the late afternoon I caught a train out to Kowloon Tong in the New Territories to meet Jaffa Lam when she had finished teaching at the university, and we spoke over coffee in the huge shopping mall above the station. The mall was completely filled with excited chattering school students in a variety of uniforms, as Kowloon Tong is zoned for educational institutions, and has many, many different schools and university campuses. It was here that I came on my first days in Hong Kong, five weeks ago, to visit the Hong Kong Australian International School and the Maryknoll Convent School. So much has happened since then, it feels like such a very long time ago.

Jaffa's practice differs from that of many of the other artists I have interviewed, as she defines herself as an activist as well as an artist. Influenced by Joseph Beuys, she has worked with performance, documentation, and other ephemeral forms, as well as with sculptural installations. She prefers to use non-art, 'found' and recycled materials in her practice, and is focused on issues both local and global. We discussed some of the questions I have raised about the place of women in the Chinese art world (and in China more generally) and I was interested to hear about her recent work with local women in Hong Kong, which is focused on the way the city is being redeveloped at such a rapid pace, and in the process people, traditions and cultural practices are lost.

The exhibition at Schoeni Gallery, by a mainland artist, also focused on this issue, inspired by a newspaper photograph of a woman who refused to leave her home during a forced demolition and redevelopment, and was photographed crouching amidst the rubble surrounded by police. The artist has painted images on bricks and broken traditional rooftiles as well as on canvas - quite an apocalyptic vision, especially the painting of the pack or wild dogs amidst the rubble. But I have seen these images with my own eyes, on the outskirts of Beijing.

Two final snippets: an articlewith the headline 'Farewell My Concubine'  in yesterday's South China Post about a new education program in Chinese schools intended to discourage girls from seeing becoming a mistress of a wealthy man as the key to success and happiness. And someone has mysteriously stencilled 'Who's Afraid of Ai Weiwei?' onto footpaths around Wan Chai and Central, and the Hong Kong Police are investigating. 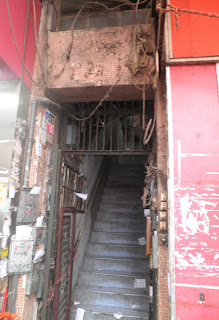 Posted by An Art Teacher in China at 5:37 PM