Beyond the Frame at the White Rabbit


I have been wanting to write about the new exhibition at the White Rabbit Gallery 'Beyond the Frame', since I have now seen it three times, once with my Year 12 students, who were completely engaged, awe-struck and thoroughly convinced, finally, that my passionate enthusiasm for Chinese contemporary art is not so mad and eccentric after all.

There is so much to think about in this show, which has a very different mood from previous exhibitions. It presents some entirely new works as well as some which have been shown in previous exhibitions, which look very different in their new context, juxtaposed with other works. The mood is certainly darker and in some ways less exuberant, although who could fail to be amused, intrigued and enthralled by Liu Di's 'Animal Regulation Series'? Comically fat-bottomed giant creatures (a frog, a hare, a panda, a deer) are trapped within the courtyards of Beijing apartment blocks under construction (or, possibly, this being Beijing, demolition) in order to make a comment on the conflict between nature and 'civilisation', a particularly pressing issue in China. On my three visits to the gallery so far, people gathered, laughing,  in front of another very engaging work, Chen Hangfeng's 'Invasive Species: Vegetables' with its noisy electronic dialogue between the plants growing in one of Shanghai's illicit community vegetable gardens. 'Eggplant' is like a big, dumb, bully character, whilst 'Bok Choi' is more conciliatory. Their talk is raunchy and sexual, or maybe, these being vegetables, 'earthy' might be a better description. 'Heh heh', says Water Spinach, 'I already left my seeds in the earth!' Surprisingly, perhaps, this tongue- in-cheek video work is about civil disobedience.

Maybe my photographs from a local market in Shanghai show produce grown in one of these illegal, but often just-barely-tolerated community gardens, where people attempt to exert some control over both prices and over food safety! 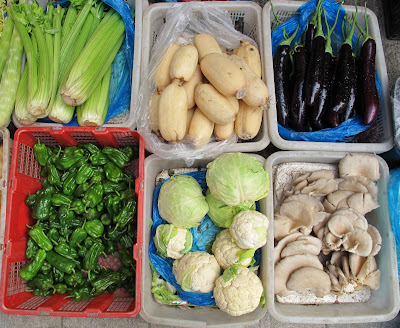 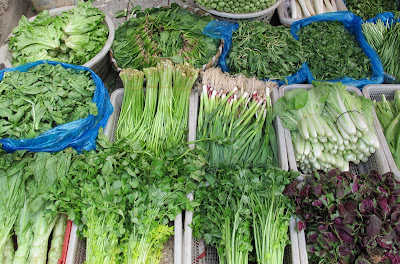 I was reminded of the Shanghai Government's fruitless attempts to force people to stop hanging their washing out all over the streets, on telegraph poles and from every apartment building, and on racks put out onto the footpaths and alleyways. They attempted without success to convince the locals that visitors to the Shanghai  Expo did not want to walk through forests of hanging underwear, quilts and blankets. But people stubbornly ignored all government directives and kept on hanging out their washing. I found this a truly iconic aspect of the city and enjoyed walking through local neighbourhoods filled with drying flowered quilts and padded jackets!

I met  the artist Chen Hangfeng in his probably-about-to-be-torn-down studio in Weihai Lu in Shanghai in April this year, when he had just returned from a residency in Japan. His work refers specifically to his local Shanghai context and the pressing social and political issues in a city of great and growing wealth. However he is also fascinated by the Chinese tradition of the scholar and the literati, and much of his work uses ancient folk traditions such as papercutting, with a satirical twist whereby the patterns reveal themselves to be  the signs of global branding: Nike, Adidas, McDonalds et al, such as in his 'Logomania' series. These works indicate an interesting shift towards greater subtlety and more layered meanings in contemporary Chinese art compared to the more obvious 'political pop' works of earlier artists such as Wang Guangyi.

As I discovered in conversation with Hangfeng over cups of flower tea in his studio, a consistent thread running through his practice is the use of found and discarded materials. Not as a self-conscious art reference to Duchamp, dada or Arte Povera, but as a very deliberate statement about over consumption, materialism, greed and the culture of desire that we all live in, and are implicated in, both Western and non-Western alike. I ask him whether he would define his work as political, and his reply is an emphatic 'Yes'. Recently he has been revisiting the art of calligraphy and has studied the traditional manual of the 'Mustard Seed Garden'. His work, 'Wind from West' is a response to this ancient and scholarly form, transformed with his choice of materials - plastic shopping bags. His intention with this work was to create a metaphor for the fact that the essence of Chinese tradition is still there but is now hard to find, or is now viewed only in very superficial ways in this 'new China', something also seen in his 'vegetable soap opera' now showing at White Rabbit.

Despite the immediate pop-culture appeal of his work,Chen Hangfeng is intending to make a serious point about the working conditions and wages of those who make the common everyday objects 'made in China' available so cheaply to consumers in the west, and about the way China is perceived as a source of cheap labour and a market for raw material. Most particularly this is seen in 'You Can Get Them', a video work in which he becomes a comical version of the multi-armed Goddess of Mercy, or Bodhisattva, Guan Yin but in each of the hands (Chen and friends providing the arms) is an item from the supermarket, an assortment of plastic objects ranging from toy guns to fly swatters and coathangers, "made in China'. Here is a link to see this work:
http://vimeo.com/5713339


Other memorable works in 'Beyond the Frame' include the harrowing photographic documentation of life in Myanmar Prison Camps by Lu Nan, and the profoundly melancholy and touching 'Mental Patients' by Lu Zhengyuan, who spent two weeks in a Beijing psychiatric hospital taking care of a friend. These grey, staring, life size characters distil the despair of the long term inmates. They reminded me irresistably of Chang Chien-Chi's photographic installation 'The Chain', which I saw in Singapore 3 years ago, which records the misery of patients at the Long Fa Tang Temple (both sanctuary and prison) in Taiwan, where patients are chained in pairs as a kind of 'therapy'.

My two favourite works, however, touch more lightly upon aspects of human experience, both universal and particular. 'Calm' by the 'Madein' collective appears at first to be a room sized pile of rubble, roughly rectangular in shape, perhaps detritus from a building site or demolition zone. Only after standing quite close and looking for a while does one see that it appears to be very, very gently rising and falling, undulating from one end to another, or 'breathing'. Unexpected and slightly unsettling, this work suggests that what we expect to see is not always what we do see, and the world is filled with inexplicable beauty for those who take the trouble to look more closely. Finally my all time favourite, 'Exuviate 2: Where have all the children gone?', Jin Nu's 2005 installation of ghostly apparitions - 20 tiny starched organza children's dresses, turning gently in the slightest shift of air current, swaying and moving as if sighing or crying in an elegy of mourning for lost childhoods. The artist denies any connection with the one child policy and the countless little girls who were never born. This may be a good demonstration, though, of the fact that the meaning of an artwork does not lie in the hands of the artist alone, but is ours to ponder and interpret. Discarded clothing, especially children's clothing, is filled with so many multiple meanings of loss and mourning, even if it is the sadness of the child grown away from the security and safety of the family, or the mother regretting the quick passage of time and the loss of her children to the adult world.

Beyond the Frame? More than the works by 'stars' such as Ai Weiwei, these works made me think beyond my comfortable Australian 'frame' of reference.

Posted by An Art Teacher in China at 4:07 AM