a coffee with zxerokool in Singapore


Yesterday I met young Singaporean artist/designer/fantasy futurist Jonathan Leong, aka ‘Zxerokool’ to talk about his work and about the life of young emerging artists in Singapore, a city which has been trying to position itself as an international contemporary arts hub, with mixed results.
Our conversation ranged from his work as a designer and art director, much known for his ability to bring Gen Y street cred and a strong distinct visual style to projects for brands such as New Balance, Feiyue, Tiger Beer, Nike and MTV; brands aiming to target younger consumers and swim in that desirable pool of social-media-savvy, international 'life-style' corporate identities. Self-described as ‘an intergalactic ninja and practitioner of visual kungfu, art and creative mayhem’, Jonathan tells me he is now able to see a synergy between his independent art practice and his commercial work as a designer/creative consultant. At 28 years old looking almost absurdly young (and making me feel oh, so very old) he talks enthusiastically about his digital media, graphic design, and sculptural projects, and especially about his first solo show next year in New York at the very, very groovy Reed Space on the Lower East Side, entitled 'When the World Ends, and Other Strange Tales'. This year he has shown with Martin Kemble’s Art Labor Gallery in Shanghai, as well as in a group show at Chan Hampe @ Tanjong Pagar here in Singapore. As we talk I can't help but imagine Jonathan as a young boy, immersed in the world of video games and sci-fi fantasy, in a computer-generated world of his own design.
Over coffee he tells me that coming as he does from a highly pragmatic Chinese family, romantic archetypes of the artist starving for his art would cut no ice at all, and that claims of ‘tension’ between the two aspects of his creative identity would be a luxury he cannot afford. In fact, he says, “I believe that art and commerce can coexist, sometimes very effectively. Everything is cross-over now”. Singapore is a city where cutting-edge design, architecture and marketing are everywhere visible and highly influential, so this new kind of artist identity is appropriate to this place, and this time. His artistic hero is, no prizes for guessing, the original cool inhabitant of that cross-over and unashamedly commercial realm, Andy Warhol. In the exhibition ‘100 friends’, Singaporean artists were invited to draw the artist who most influenced them, and Jonathan had no hesitation in selecting the ubiquitous Andy as his subject. In this show, 100 A4 framed artworks by 100 artists were priced at S$199 on a cash and carry basis with 100% of the proceeds going  to the TRANSMISSION: PROJECT, an annual experimental ‘incubatory platform’ for young artists and designers to come together in an artistic exchange and mentoring process.

Leong identifies the significant Singaporean Phunk Design Studio as a major influence on his work (and, I would guess, on his artistic identity). They have been described as propagating a visual signature that blends and recontextualises influences as diverse as traditional Chinese art, craft, philosophy and culture, Hong Kong wuxia, Japanese manga and otaku subcultures, together with Western popular culture, art, and design movements. Highly influential in the Asian design world, they aim to challenge conventions of the separation of artist and designer by deliberately and playfully blurring the boundaries.
As a young artist, one of the first generation to experience the transition from slow to fast broadband internet access, and to seamlessly transition between all the various forms of social media, Leong describes the way that people now ‘curate’ their own identities. This suggests once more that previous ideas of the fixed role of ‘the artist’ are somewhat outmoded, and notions of the true artist being somehow sullied by a dalliance with commerce now appear so quaintly 20th century that they might belong in the Madison Avenue offices of Mad Men. He says his work is inspired by science fiction, architecture, contemporary visual culture and ‘the moments in between dreams and reality.’ In exploring themes of urban utopia and fantasy he has created his popular and highly engaging series of ‘fake comic book covers’. Currently a little obsessed with the resurgence of zombies in popular culture; he is also planning to design some ‘info-graphix’ parodies for his show in New York next year, which will include a zombie-proof house. Why? Because, he tells me, the current popular culture zombie obsession indicates a deeper unease, a feeling that everyone is looking for a safe place. Of course the irony is, “One is never really safe in a time of chaos”.


In a city such as Singapore, with its increasingly 'futurist utopian' skyline dominated by what some see as the sinister submarine-like shape of the top of the Marina Bay Sands towers, this savvy combination of commerce with an individual art practice reflects the mercantile history of the Chinese and Peranakan inhabitants as well as its position in the global marketplace. Chaos abounds, as even the most casual glance at the Straits Times will tell you, but there is always room for a little tongue-in-cheek zombie-proofing, and a playful approach to the serious business of art. 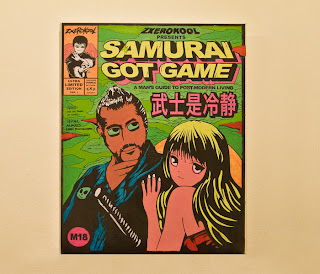 Posted by An Art Teacher in China at 8:08 PM