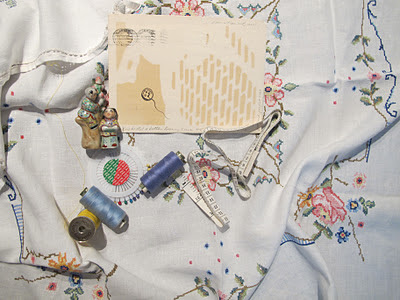 When I met artist Carol Lee Mei-kuen in Hong Kong last year, she told me about her ongoing postcard 'mail art' project. She makes small postcard-sized works using her idiosyncratic time paper technique, in which she lays objects and cut paper stencils down onto cheap newsprint paper (usually bought in rolls from Ikea!) and exposes the paper to the sun for various controlled amounts of time. She has done this so often that she can predict and control the degree of discoloration on the surface of the paper, so the method produces results which are essentially photograms made without chemicals. In this way, her works become a record of the effects of light, and the passage of time. They are often melancholy reflections on the fleeting nature of human existence in this world, the transience of relationships and the ephemera of our lives.  Carol has been sending hundreds of postcards to people all over the world, requiring that, in turn, her recipients take a photograph of the tiny artwork they have received through the mail, in their own environment, and send it back to her.

I was delighted to open the mailbox some months ago to find a delicate piece called 'Laundry basket and button Bisney home HK', but then I  began to agonise over how to respond, and where to photograph the postcard. The longer I delayed, the more guilty I felt about holding up this process of artist/audience collaboration.


As Carol's work is so intimate and domestic in its focus, I decided that my response had to be a close up image in an interior setting. Finally I chose to photograph it on an old cross-stitch embroidered tablecloth found in a second-hand shop, with thread, tape measure and pins from my jumbled sewing box, and the tiny porcelain children climbing a peach tree that I bought in the Panjaiyuen 'Dirt Market' in Beijing last year, as a nod to the significant influence of the Chinese traditions of ink painting and paper-cutting on Carol's work. 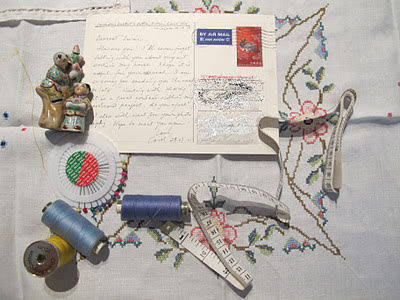 Posted by An Art Teacher in China at 8:26 PM