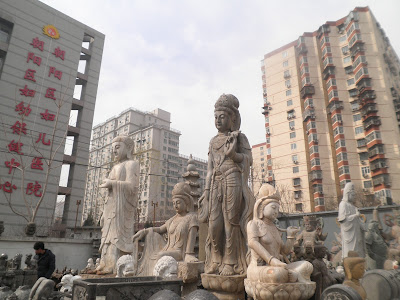 I have been earnestly attempting to spend an hour every day over the summer revising Chinese, aiming to arrive at a lesson one of these days without feeling woefully inadequate, unprepared and unable to speak. I am told that at some point in language learning there will be a breakthrough - I am rather hoping for that day to come before I return to China in April. Meanwhile, I find myself dreaming about Chinese, and sometimes waking with whole Chinese sentences in my head. This must be my unconscious mind attempting to create some linguistic neural pathways. I have occasionally found myself breaking into partial Chinese in the middle of a sentence, much to the amusement and/or consternation of my daughters. "Want to go and get a coffee, zenmayang?",I hear myself say, or replying to a question with 'Mei wenti!" (no problems!). Looking for a particular volume on the bookshelf I discover that I am talking out loud. "Zhe ben shu!" (This book!) I say triumphantly. I even confess to texting my daughter, away on holidays, "wo ai ni!" (I love you). I have post-it notes stuck to chairs, tables, windows, doors, cupboards and kitchen utensils, in a vain attempt to remember their names. Embarrassing, and makes me feel like a sad loser, but what the hell, at this point I am prepared to do just about anything that might help in this mad endeavour.

'Dreaming in Chinese' is the title of a book that I loved, by Deborah Fallows, subtitled 'Mandarin lessons in life, love and language'. The author, a professor of linguistics who lived in China for three years, muses on particular words and phrases, and what they reveal of cultural identity and cultural differences. Notions of politeness, for example, prove to be very culturally specific, as anyone who has run the brusque gauntlet of "Mei you!" (Don't have!)  and "Bu Keyi!" (Cannot!) in a Chinese shopping centre can attest. Interestingly, many Chinese people told her that English requires way too many pleases and thankyous, making conversation between friends seem stilted and formal. In other words, language shapes us, and shapes our interactions and connections with each other. English speakers use too many of these elaborate politenesses when speaking Chinese as well; it feels so rude to just say "Give me coffee!" In contrast to western stereotypes of Chinese rudeness, however, there are so many delightful linguistic courtesies in Chinese. I was absurdly pleased every morning when the teenage bellhop, attired in a ridiculously large and ancient army greatcoat, called out "Man zou!" (Literally 'walk slowly', but used colloquially to mean 'take care') as I left my hotel in Beijing each morning, dodging cars driven by maniacs and bicycles carrying entire families.

Despite my constant struggle to learn and remember Chinese vocabulary, I tend to fall in love with particular words and phrases: current favourites include "deng deng" ('wait a minute', and also 'etcetera') and "gongong qiche" ('public bus'), purely because they sound so great. I also love the fact that the word for the colour pink, "fenhong se" is literally 'half red'. These are words I have no trouble memorising! Unfortunately I can't string my favourite words together to make conversation - unless I wanted to write dada poetry.

I enjoy the many poetic compound words such as "haohuai" (meaning 'quality', but literally "good/bad"), "zuoyou" ('nearly', literally "left/right")  and "gaoai" ('height', literally "tall/short"). My favourite, though is the word for 'stuff', or 'things', "dongxi" (literally "east/west" as in: "I am going to the shops to buy some east/west!")

The ultimate Beijing "dongxi" shopping destination is the Panjaiyuan 'Dirt Market', a huge, fascinating and, I confess, rather intimidating chaos of dubious Mao memorabilia, Buddhist statuary, and fake 'antiques' of every possible supposed dynasty. I spent time wandering, and chatting, and especially in watching the Uighur traders from Xinjiang Province and the furthest reaches of northern China with their arrays of beautifully displayed stones and gems, their faces also like polished walnuts. Intimidated by trying to bargain, hindered not just by my bad Chinese but also by my mathematical hopelessness, in the end I came away with just a snuffbottle (fake, no doubt) in the shape of a peach tree with two small children climbing its branches. "Good fortune," said my Chinese friend, and associated with the need to ensure the birth of sons. "Give it to your daughters", she said, before launching into a pop song of the "wo ai ni" romantic variety. 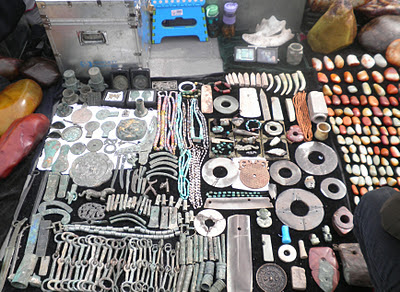 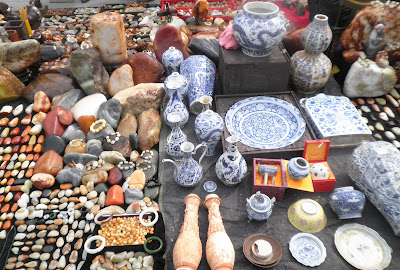