This relic of a socialist past is at the back of the 798 Art District, on a narrow road where steam hisses unexpectedly out of strange pipes and from cracks in the path. Hard to believe that the city planners intend to replace all of this with a 'water park' complete with fountains and pools.  In one of the driest cities on the planet, and in a district which is well and truly on the tourist map, for good and ill, this is strange decision making.

I write this at the end of my third day in Beijing. A day as exhausting, exhilarating, frustrating and wonderful as this one has been could only happen in China. I had arranged an interview with a young artist, a meeting at the Three Shadows Photography Art Centre and visits to four galleries, all in Caochangdi, which sounds like a manageable schedule but didn't really take into account the particular difficulties of getting around. Caochangdi (an outlying place, part city, part old town, part ugly suburb) is notoriously difficult to navigate and tends to involve many, many phone calls in Chinese to the various parties asking how the hell to find them. Taxi drivers patiently drive in circles, sometimes stopping in the middle of the road and turning off the engine while the phone calls are made.

With Stanley, my trusty translator, I caught the bus. He assured me he knew where we were going. After leading me up onto a railway track, where we were followed by mangy and quite possibly rabid dogs, I decided the hell with his 'face' and said, 'Oh really, I don't think so - call the gallery now!' Many phone calls ensued, and we walked first one way, still followed by the dogs, then another, down dusty windswept streets. Past an elementary school with military marching music blaring from loudspeakers and little children in blue tracksuits exercising in the yard, past street markets with underpants and running shoes laid out on the trays of rusty old tricycles and vendors selling what appear to be grilled intestines on sticks, past factories, construction sites and military barracks. I wonder, as I do so often in China, why villages in the countryside and many parts of Beijing look as if they have somehow survived the apocalypse. 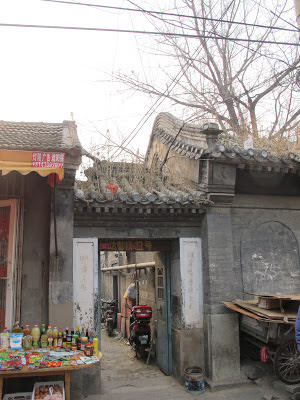 Eventually, many shouted Chinese phone calls later, it transpired that we had passed the entrance to the street several times in our wanderings.To get to it we had to duck underneath an advertising hoarding and wend our way past an enormous and hideous KTV karaoke parlour set in a kind of wasteland with Egyptian statuary and what looked like a sculpture of the four horsemen of the apocalypse out the front. Quite appropriate. Then suddenly we are in a tiny narrow walled lane and emerge into the series of beautiful galleries designed by Ai Weiwei some years ago, before his current troubles.

Eventually we found our way to Urs Meile and Platform China and saw exhibitions both interesting and not so interesting. Paintings by Shao Fan at Urs Meile revealed an interesting adaptation of highly academic realist painting. At Platform China I saw a show of installation works by Zhou Yilun. The title of the show 'As there is Paradise in Heaven' is apparently taken from an old proverb "Up Above there is paradise, down below there are Suzhou and Hangzhou" the relevance of which I confess entirely eludes me, except for the fact that the artist lives and works in Hangzhou. The exhibition of paintings and installation works is raw and crude and slightly disturbing, drawing inspiration from pornography, political advertising, cartoons and sci-fi. The show struck me as the less than coherent outpourings of a young artist whose practice is yet to mature, but which has the potential to be extremely interesting.

I met young photographer Chu Haina at Egg Gallery where she is currently showing her work in a group exhibition, and we spoke at length about her practice. She creates blurry, soft and very ambiguous images shot with film and printed digitally. Her work reminded me of early photographs by Niepce or Daguerre, or experiments with alternative processing. She is self taught, and very dedicated, living in a space in Caochangdi tinier than any I have ever seen. Having shown her work in an exhibition of emerging artists at Redgate Gallery, and now at Egg Gallery, she is hoping for a solo show. This seems to be the right time for young photomedia artists in China, with increased interest in its possibilities for making images which reflect contemporary life. Haina takes her camera everywhere she goes and looks for images which will evoke a particular kind of feeling in the viewer. She herself loves an eclectic range of artists, from Diane Arbus to Taiwanese photographer Ruan Yizhong to the Japanese Hiroshi Sugimoto, who was shown at Pace Beijing earlier this year. Her work has an elegiac and subtle quality, especially the larger more abstract prints shown at Redgate.

The current state of photomedia in China is an interesting one - at once very exciting and cutting edge yet at the same time often still seen as the poor cousin to painting and sculpture. In a wide ranging chat at Three Shadows with their director of international programs we discussed what it is that characterises current photographic practice here. She told me that there is a resurgence of interest in alternative processing, especially from younger photographers who have perhaps never seen a darkroom in their training, and have never used film. Jurassic technologies are returning in every field it seems! Chinese photographers, working in a medium which is still at the margins of artworld acceptance, can say a lot with very little, layering meanings which skirt the boundaries of what is permitted. And not just in photography: artists in China are adept at developing techniques which reveal much, with a great economy of means.
In this vein, I later discovered a fascinating exhibition at Boers-Li, of works created by Kang Wanhua whilst imprisoned for almost three years during the Cultural Revolution. Tiny works, some the size of postage stamps, made clandestinely on whatever surfaces the artist could find (playing cards, precious scraps of paper) with scratchy oil crayons, they represent scenes from the artist's imagination. Creating expressionistic portraits and Arcadian landscapes became his way to survive. That they were made at all is extraordinary: that they found their way out of the prison is nothing short of miraculous. Boers-Li Gallery is conducting a research project investigating the roots of contemporary art in China. These years of oppression gave way to a frenzied outpouring of creativity, despite tight control and censorship, at a time before the art market existed in China. Some see that time as creativity in its purest form. Before he was sent to prison Kang was an art teacher, but was later assigned to Beijing Shuguang Electrical Machinery Factory as a worker. When I looked at his CV I was moved to see that his imprisonment coincided almost exactly with my own years at art school in the mid 1970s, a time for me of great freedom, excitement and the sense that anything was possible if I wanted it enough. A time also when we were unforgivably ignorant of what was happening to artists in other places in the world. 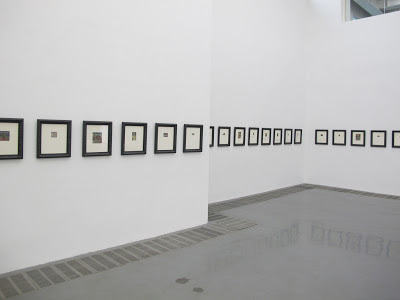 Other interesting work seen today:
An installation created from spent fire crackers by Jiang Zhi:
A series of portrait heads that turn out on closer inspection to be carved from stacked books: 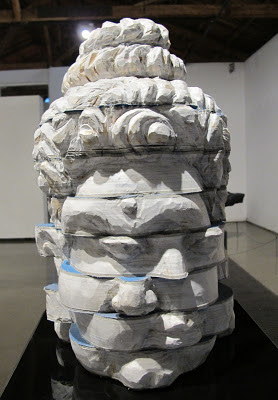 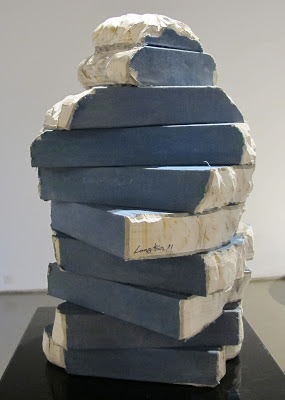 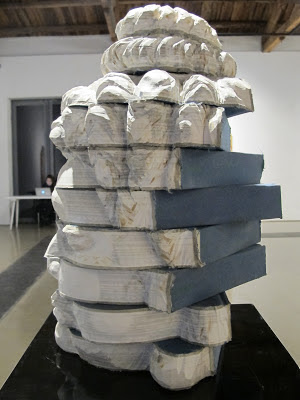 Variations on the tradition of papercutting, 'Strange Flowers' by Hoyun Shin: 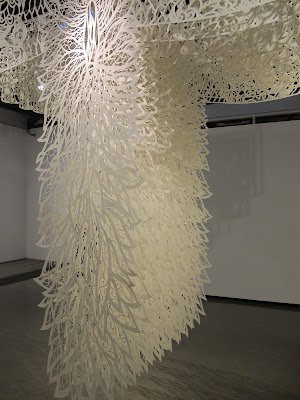 Elegant meditations by Shen Kelun on traditions of Chinese furniture and lacquer ware: 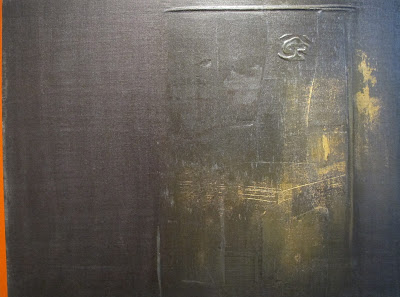 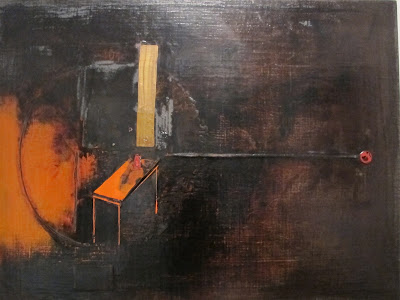 A series of fabulously expressionist paintings by Cui Guotai that are like a lost lament to the heroic workers and heavy industry of the Communist past: 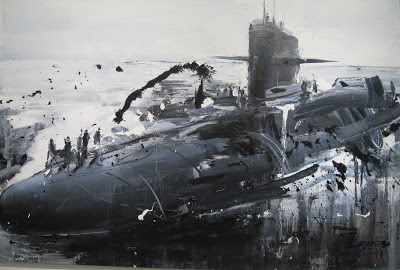 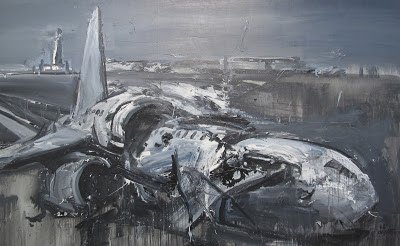 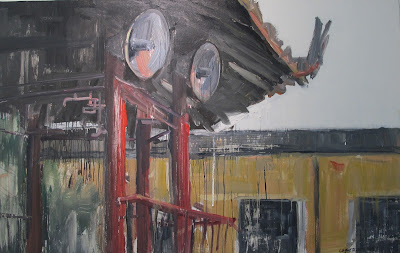 Posted by An Art Teacher in China at 5:45 PM