Ah Hong Kong! Toilets flush, traffic lights are obeyed, nobody is spitting in the street right next to me, and whilst it can seem chaotic and frenetic there is still a sense of order and stability. As Fuschsia Dunlop so memorably said, Hong Kong is like a decompression chamber after being in mainland China. It is strange to hear Cantonese, with its long "maaaaaa" and "laaaaa" sounds at the ends of sentences, after the more clipped  tones of Mandarin. And just when I was getting a little bit better at communicating! 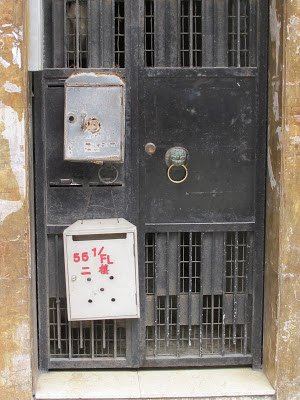 When I arrived today I was struck anew by the contrasts. Glitzy storefronts with mildewed apartments stacked above. Beautiful mountains rising out of the sea like a literati painting juxtaposed with enormous slender tower blocks and  outlet malls. In Kowloon two men with a sign reading "Keep away from Falun Gong Evil Cult" lounged against the wall of the Gucci shop next to a poster advertising cosmetic surgery and a woman handing out foot massage leaflets. Mainland Chinese queued in long noisy lines to get into Prada, Chanel and Burberry on one side of Canton Road whilst on the other side Hong Kong citizens queued patiently at bus stops, waiting for buses to far suburbs.

Louise Hawson of '52 suburbs' fame has some great photographs of Hong Kong housing estates - check them out here: http://52suburbs.com/suburb/hong-kong/

On Sunday I will go out to Fo Tan to see the artist Lam Tung-pang in his studio in that previously industrial neighbourhood. Now all the industry is pretty much over the border. And so are many of the workers who can commute to Shenzhen or Donguan and be paid in RMB.

Reflecting on my past two weeks in Beijing and Shanghai - I have learned so much and been so privileged to be welcomed into studios and galleries with great warmth and kindness. Ordinary people from taxi drivers to hotel staff to shop assistants have generally been helpful and friendly - maybe it's my grey hair!

1. Cui Guotai, a painter I had not come across before - I loved his raw expressionist works of military hardware and industrial installations fallen into decay. Like a eulogy for the Socialist Utopia.

2. Liu Zhuoquan's new work is very exciting - a development from his 'neihua' inside painted bottles as seen in White Rabbit and the Biennale of Sydney, he is now working with lights and developing larger installations. These birds are painted on the inside of the lamps which are intended to evoke those on Chang'An Avenue in Beijing, leading to Tiananmen Square. The black birds are birds of ill omen, a dangerous portent. And a coded political meaning as in so much of this artist's work. The references are very subtle, but they are very deliberate and intentional.

3. The new works by Gao Ping - she continues her subtle and delicate ink on paper works of 'tiny things' - rows of tin mechanical toys, sad stuffed animals, tiny people or cars, miniature gardens or pot plants, floating on expanses of Chinese paper. However she has developed strong works in oil on paper and canvas, exploring a palette of subtle greys, fleshy pinks and celadon green, from which murky forms emerge from a misty wash of pigment. They are evocative and very beautiful works.
Gao Ping is an artist who impressed me enormously with her quiet dedication to advancing her practice - unflashy, unpretentious, absolutely sincere and genuine in her determination to keep learning.

Actually I lied - I can't leave it at three. I have to include Dong Yuan and her paintings of her grandmother's house - multiple small canvases making up the entire 4-roomed house as it was in Dalian in the artist's childhood, reconstructed from photographs, memories and interviews with her relatives:

And. finally, the truly astonishing work by Huang Yong Ping in the Shanghai Biennale, 'Thousand Hands Kuanyin' - this artist continues to amaze, delight and impress.

Posted by An Art Teacher in China at 7:14 AM