Just what is it that makes Shanghai so different, so appealing?


I go to sleep at night with all the Chinese phrases and sentences floating around in my head that I somehow haven't been able to remember during the day when I need them. In my dreams I am wonderfully fluent, but during my waking moments it is as if I have been rendered mute. I stumble through basic requests, usually forgetting the interrogative 'ma?' in my questions, so I must sound weirdly declarative. Sometimes I obviously sound better than I am, so am met with a flood, a torrent, an avalanche of Chinese and have to shamefully declare 'Wo bu mingbai' - I don't understand. I am absurdly pleased with myself when very simple conversations are conducted successfully in Chinese - albeit with a fair bit of mime and gesturing. People are wonderfully good-humoured and like to practice their English, so we get by with good grace on both sides - although I find they are generally very amused by the notion of any foreigner attempting to speak Chinese. Secretly I suspect they think we are absolute barbarians.

Sometimes this seems to be in fact the case. Last night as I was desperately flinging myself into the path of the terrifying Shanghai traffic, attempting to hail a cab, a middle aged Australian couple got out of a taxi next to me and the man said, "You might as well take this one, he can't seem to understand my instructions". Why on earth would you expect him to? is what I wanted to ask, but instead gratefully jumped in. Later I felt guilty, thinking I should have tried to help them communicate, but I must have been infected by some of the Chinese 'every woman for herself' attitude in public spaces. And I didn't like my compatriots appearing both ignorant AND arrogant. Also they had just come out of a very swanky hotel, so too bad!

Three more things not to select from a Chinese menu:
The last few days have exposed once again the extraordinary contradictions of China, as seen through the  the microcosm lens of the artworld. From the quiet, contemplative and thoughtful practice of Shi Zhiying, steeped in Buddhism and the traditions of ink painting; to the internationalism of the Shanghai Biennale and some apocalyptic exhibitions at M50; to the Shanghai Museum's blockbuster show of Chinese ink painting and calligraphy from American museums; to sentimental socialist realism at the Shanghai Art Museum; to social activism through art in the work of a number of painters and the performance artist Wu Meng: everything goes into the stir fry that is China today.

I started the day at the very wonderful Shanghai Museum, which is housed in a rather ugly building designed to resemble an ancient bronze 'ding' vessel and containing a fabulous collection. The exhibition of paintings and calligraphy from museums such as the Metropolitan in New York, the Cleveland Art Museum and the Boston Museum of Fine Arts was packed with Chinese visitors of all ages, intently reading the calligraphy and peering at the scrolls and paintings in silence. I felt like such a frivolous dilettante flitting from one to the next and trying to remember the historical sequence of the different dynasties. It is very possible to see the strong influence that these traditions continue to have on contemporary artists - especially literati painting and Song Dynasty Bird and Flower painting. And humbling to see what the Chinese were doing during Europe's  Dark Ages. 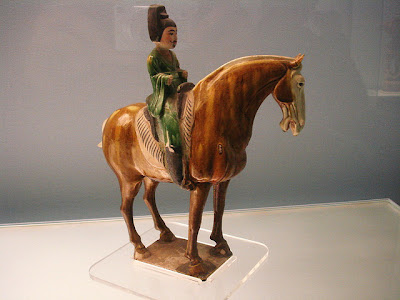 With a brief detour past the men playing cards and mahjong in People's Square, under the eyes of a statue of a revolutionary hero, I entered the Shanghai Art Museum, previously the European-only club of the Shanghai Racecourse, to discover myself deep in the sentimental land of socialist realism - the motherland in fact, as the exhibitions title declared. I have seen a number of these exhibitions in China, where artists employ their exemplary skills to depict scenes like those in a Victorian narrative painting with a moral - they always remind me of the Holman Hunt  work 'The Awakening Conscience' except that they depict beautiful idealised peasant girls and happy ethnic minority peoples herding their sheep. In fact, they are not unlike the photographs sold to tourists in Xintiandi and Tianzifang, which so often use dirty-faced ethnic minority children as their subjects. In these there is an unpleasant kind of Orientalism and 'exotification', as well as a romanticisation of a reality that is more often difficult, unpleasant and politically fraught. Ironically, the artist is based in LA and paints for an international market of nostalgic Chinese. The Shanghai Art Museum was, however, once again, full of Chinese visitors taking photos of the works on their mobile phones and buying postcards to take home.
Artists have responded to the dramatic and growing wealth disparity in China in a number of ways. Suzhou Gallery in M50 showed paintings by a  group of artists participating in a project travelling to Hunan and Jiangsu Province and painting old people, young migrant workers, and children in the village school. Unfortunately there was no information available in English about the artists or the project. The paintings were good - strong, expressive and allowing the subjects full dignity, without romanticising their hardship. These young migrant workers lead hard lives with an optimistic determination to reinvent themselves, far from rural poverty, in the factories of the Pearl River Delta.
At the Biennale a project of video interviews of old people from the villages of remote provinces and from older areas of the big cities is an attempt to record their stories and memories. Walking through the hanging installation of the still images of their faces is quite a haunting experience. 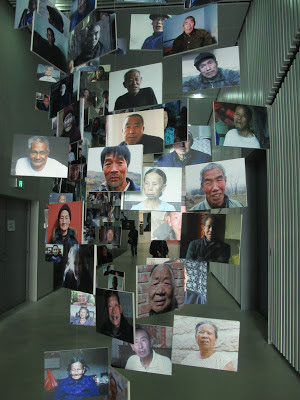 The painter Yi Wei is showing large and fabulously painterly canvases recording the impoverished living conditions of migrant workers and the urban poor. Reminiscent of the virtuousity of Liu Xioadong, I found these paintings gripping, absolutely unsentimental yet filled with humanity and compassion. There is a growing awareness and unease here about the social implications of the changes that have taken place in the last ten years, and a growing bitterness about the 'mega-rich' and their conspicuous consumption of all the status symbols of western fashion, from Philippe Patek watches to Louis Vuitton handbags and Porsches. In fact there is a web site that tracks the watches worn by members of the People's Congress and publicises them online. The other day, performance artist and activist Wu Meng told me about the film project she is working on, recording interviews with the 'educated youth' who were exiled from Shanghai to the countryside during the Cultural Revolution. Now elderly, and in many cases returned to the city of their birth, they feel angry and  unfairly treated. There are many such projects, some more politically sensitive and potentially dangerous to the artists than others, reflecting a growing interest in justice and a growing compassion for the 'underdog'.
Another artist, Li Xiaofei, has presented a video work called 'Assembly Line' in which he interviewed factory workers, managers and owners about their lives, examining the relationships between man and machine, management and labour, and the individual and society. One of the women interviewed spoke about her work in the past enforcing family planning regulations and the one child policy, another issue currently being re-examined here.

At M50, the enclave of artist studios and galleries (the good, the bad and the ugly) next to Suzhou Creek I wandered the galleries for most of the afternoon. At Vanguard, a bizarre and interesting curated show 'Just What is it that Makes the End of the World so Appealing?' included works by the Made-In collective - a tent surely intended to reference Tracy Emin's notorious 'Everyone I Have Ever Slept With since 1963' and Yang Zhenzhong's video in which a series of people spit what appears to be blood over the camera in a repetitive sequence, recalling his famous 'I Know I Will Die' video from some years ago.
At Island 6 (Liu Dao) 'The Cat That Eats Diodes' revealed their characteristic crossover hybrid works that blend painting, sculpture, light and sound, and computer generated animation. Sometimes too commercial for my taste (and, sometimes, quite frankly, sexist in their approach to the representation of women) nevertheless a really interesting collective art practice that integrates new technologies with artmaking. And a real indication of the interest in Shanghai of the way that boundaries between art, design, architecture, fashion and even events can be blurred.
At Studio Rouge, a number of different works including some of Huang Xu's beautiful plastic bags photographed to transmogrify them into 'scholar rocks', thus making a comment on the influence of the literati in Chinese tradition and the significant issues of environmental degradation and pollution. With his wife, Dai Dandan, he developed the recent installation show at Studio Rouge in Shanghai and later in Hong Kong. 'Mr and Mrs Huang in the Humble Administrator's Garden' combined his photographs and other sculptural works in which he uses buttons to create temples and pagodas, with Dai Dandan's 'luxe' scholar rocks encrusted with rhinestones.  A witty and beautiful play on the Chinese obsession with gardens as miniature perfected landscapes. 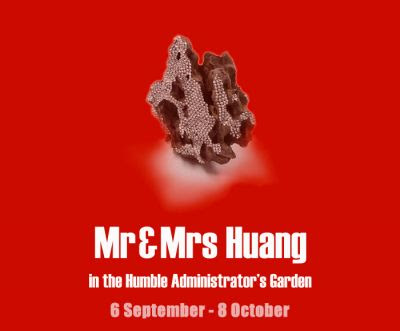 Having spent a morning this week wandering the Yu Gardens here and having all the various levels of symbolism explained to me by my young and very serious translator I feel I have just a glimmering of understanding.

At OV Gallery, an exhibition by painter Shi Jing, 'The Remains of the Day', also seems a little apocalyptic. Curator Rebecca Catching, whom I met today, says that his "asteroid series takes this concept of elapsing time to a new and cosmological level. Images of asteroids, which were taken from an Internet fan-site, are applied to the canvas using a combination of brushstrokes moving in different directions to depict the bulbous, pockmarked forms. What fascinates Shi Jing is the idea that for an asteroid, travelling an average of 90,000 km an hour, these photos are outdated even by the time they are taken. What we perceive is merely an image of an asteroid which is now light-years away from where it once was." The paintings become an installation with frames constructed with protruding LED lights which cast eerie shades of green, blue and magenta onto the dark surfaces. This continues the artist's interest in the vastness of the cosmos.

There seems to be a somewhat apocalyptic theme here, and in a week in which North Korea fired a long range missile and many memorial ceremonies of the 1937 Nanjing Massacre took place across China,  that may be most appropriate. Meanwhile, however, the men in People's Square play mahjong and in Fuxin Park they fly kites and play cards. Life continues in all its banality and its beauty.

Posted by An Art Teacher in China at 7:30 AM