Three items from today's China Daily which evoke the general strangeness of China:


And there appears to be much excitement that the Oxford English dictionary might include a Chinese neologism, an example if ever there was one of how language must change to reflect changing realities. The word "tuhao" has gone viral to describe the vulgarity of the newly rich. I first heard it from a young translator who asked me to define the Australian term "bogan". I confess. I struggled. When I asked him to tell me what the Chinese equivalent might be, he came up with "tuhao", telling me it applied to people with money but no class.

How do you say "nouveau riche" in China? Tuhao.

As in, "The Real Housewives of Beverly Hills" are tuhao. Covering the inside of your Rolls-Royce with jade is tuhao. Or, the most popular use, the new gold iPhone 5s is now known in China as the "tuhao gold iPhone."

Meanwhile, in Tuanjiehu Park, which is emphatically NOT 'tuhao' the dancers, singers, musicians, card players, Qi Gong disciples, and water calligraphers go about their self-appointed tasks. People out to run, listen to radios (loudly) read out loud to themselves as they walk, do various vigorous forms of exercise or just sit in the sun are there in force each day. It is a tiny microcosm of Chinese life. As one Tuanjiehu resident said to me, "If you want to know about China and the Chinese, don't read a book, come to the park." 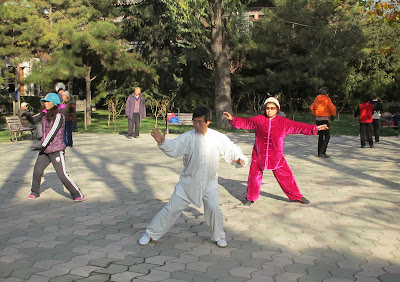 In the last week I have returned from a weekend trip to the wonderful city of Chengdu where I attended the opening of an exhibition of collaborative works by Australian artist (and longtime China resident and director of China Art Projects) Tony Scott, and Chengdu artist Dong Xiaozhuang. We stayed at the Art Hotel Chengdu and were treated as honoured guests by the artist's son, visiting the impressive space of the new Chengdu Modern Art Museum, and eating hotpot with local artists. I hadn't expected to find myself making a speech at an art opening to more than 100 people, following a line-up which included the Australian Consul General, Nancy Gordon (a lovely woman with enviably fluent Chinese) and a bunch of Chengdu politicians (who looked like every Chinese official you ever see in a news photograph - I think there is an assembly line somewhere) and artists and academics from the Chengdu Academy of Fine Arts. It was a surreal moment to add to all my other surreal China moments. I had to give the speech in English, with a translation sentence by sentence, so I thought the only thing I could do was to start in Chinese with an apology and an explanation for why I couldn't give the whole speech in Chinese - at least that got a laugh.

I have finished six weeks of Chinese classes, with very little appreciable advance in my fluency of speech or my ability to read. This might be a lost cause. I have days where I feel at least vaguely competent to communicate and others where it all just goes pear-shaped. When I went to the post office today various officious post office employees were shouting a whole lot of instructions and I couldn't understand a single word in the torrent of verbiage flying at me. I maintained my usual tactic, which is to nod and smile in the hope that eventually people will do things for you, even if only in an exasperated desire to get rid of the stupid laowai. This usually works. Whether my letters will ever reach Australia is another matter though.

I have had a second interview with the wonderful Ma Yanling at her studio in Songzhuang, sitting in front of an open fire as they have no heating. And a highlight of this week: meeting Yin Xiuzhen after her successful solo show at Pace Beijing, returned from installing shows in Korea, Philadelphia and the Moscow Biennale, and seeing the studio out near the Great Wall where she works collaboratively with husband Song Dong. I enjoyed hearing about her transition from ten years as a high school art teacher, where by all accounts she was in constant trouble from the school authorities for such infractions as allowing her students to listen to music while they were painting.
In addition to writing an article about my interview with Bingyi Huang, and one about Guan Wei (watch this space!) and thinking about how to structure my account of the fascinating women I have met in Beijing,  I have done a little bit of wandering around, looking and listening and enjoying the rare blue sky days and sunny afternoons. One more week in Beijing then on to Shanghai - it will be difficult to leave!

Posted by An Art Teacher in China at 7:28 AM