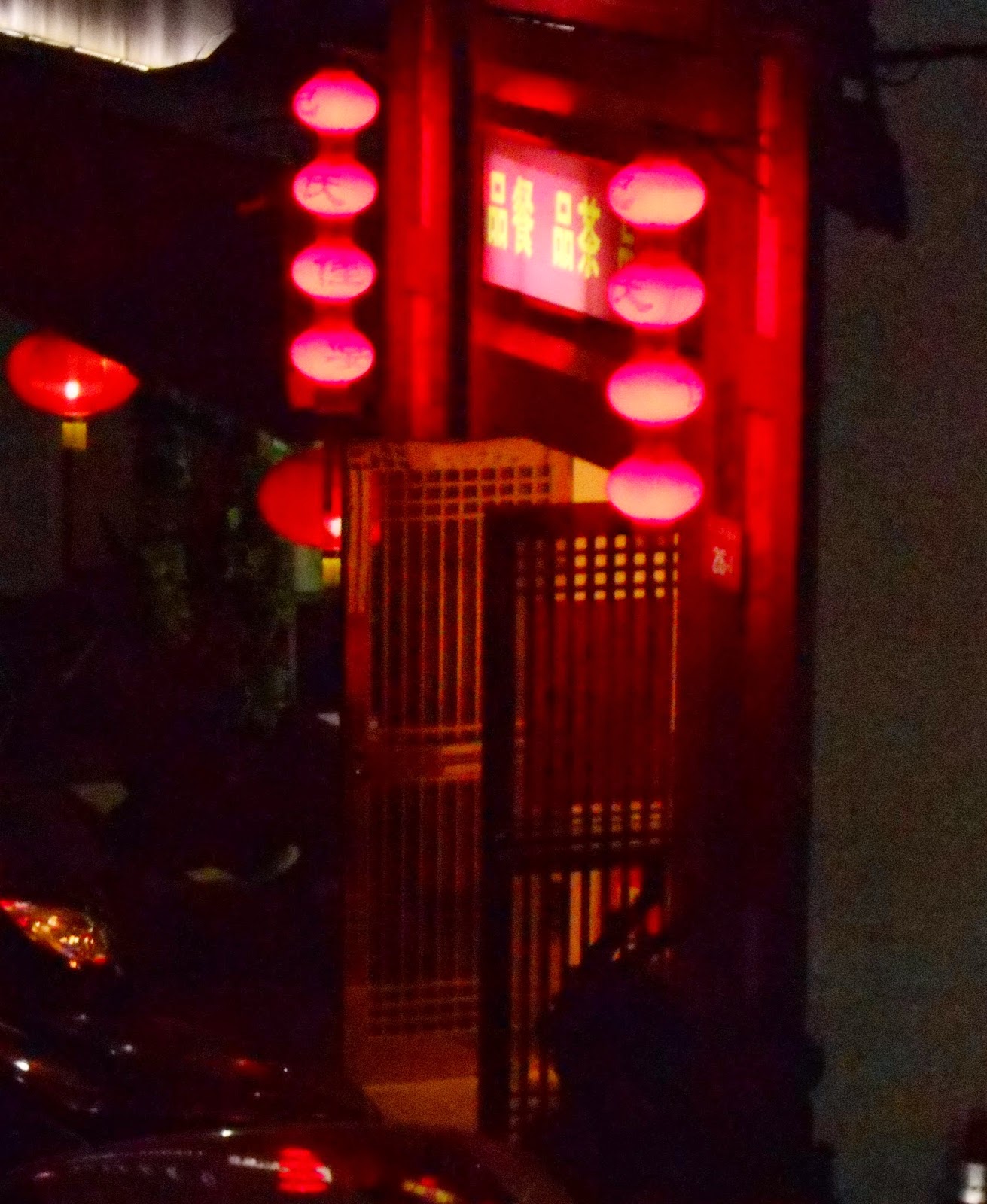 Beijing, such a grey, grey city by day becomes a fairyland at night. Red lanterns swing in the breeze at every tiny restaurant - a cab ride across the city is a blur of neon and red. Last night I walked home by a circuitous route down unfamiliar back lanes and through hutongs and found a different world behind the big roads with their clogged traffic. Hundreds of people sat at makeshift tables on small chairs and stools, eating in happy, noisy "renao" family groups - pavement hot pot, pavement barbeque, food of every description being cooked and consumed outdoors in the warm evening air. Inside the steamy windows of small local restaurants were more big groups. Children chased each other up and down the street between the tables, one of them calling, "Watch out for the 'waiguoren' (foreigner)" - me! From the moment I left my apartment and encountered the busy mobile bicycle repair man and felt the breeze, walking behind laughing, chattering girls arm-in-arm as they left the subway, I was in a good mood. 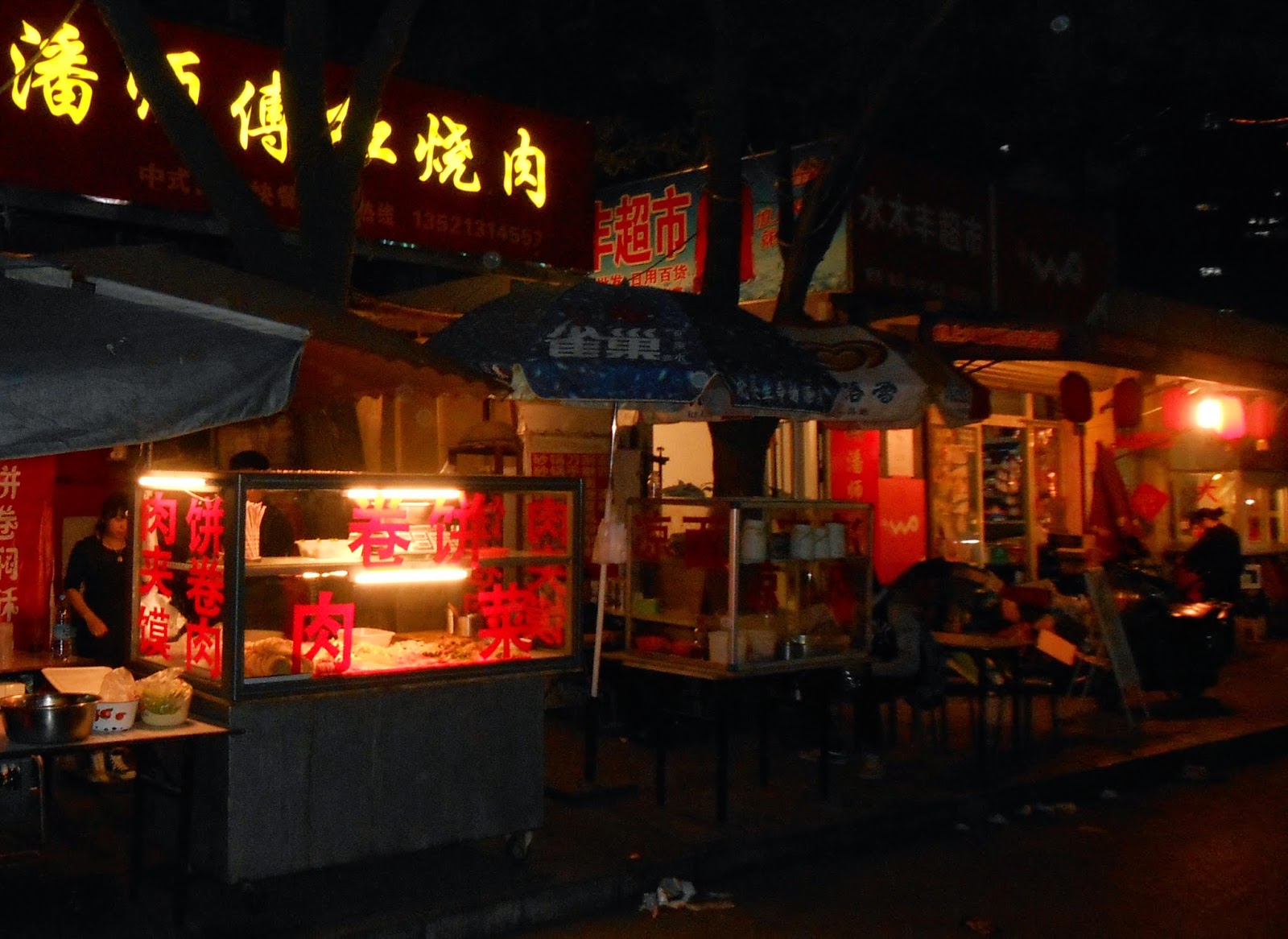 And tonight again, waiting for my cappuccino in a Costa Coffee before meeting an artist friend for a walk in Ditan Park, I stood next to a Buddhist Monk from the Lama Temple who was perusing French mineral water at 50 kuai per bottle, and watching an old man with a waist-length grey ponytail carry his birds in their bamboo cages for a stroll along the busy road. A cyclist cut across his path, another elderly man with a small poodle in the basket of his bike, the ends of its ears dyed bright green. Beijing, where cognitive dissonance is everywhere. You've got to love this city! After dinner in a vegetarian restaurant near the Confucius Temple we walk to visit another artist, and music emanates from every quarter - the shops selling Buddhist paraphernalia, a group of women dancing in unison to a disco track on the footpath outside KFC and then a much bigger group of women dancing in the pitch dark of Ditan Park. In my taxi back to Tuanjiehu, stopped at lights next to a small park in the centre of the city, I hear a clashing of cymbals and drums, and massed voices singing revolutionary songs from the past - in complete darkness, with barely even a streetlight.

In fact, I could have been singing James Brown to myself - "I feel GOOD!" Or perhaps more appropriately, Pharrell Williams' "Happy". If I stay here any longer I might actually catch the habit of many Beijingers of singing in public, Imagine the horror of my daughters - and my students! I have emerged from a few days of feeling sick with flu and constant coughing, not helped at all by the legendary Beijing air pollution, feeling anxious about why on earth I am here at the other side of the earth, away from my family and engaged on this quixotic enterprise of writing a book about people whose language I don't speak, indulging in self-doubt.

But I have had a (small) breakthrough - a tipping point if you like - with the language. After the usual first few days of feeling as if my tongue had been cut out, I have been navigating the city in Chinese, and felt very smug yesterday after two days of negotiating with a non-English speaking driver, arranging times and places for pick up and drop off, prices, and general conversation about weather, traffic, artists being famous or not, and what he sees as the hopeless inadequacy of Australian medecine to cure my cold and cough. It has of course helped that he is an immensely patient young man, who simply keeps repeating everything over and over again until he thinks I have probably understood most of it. We have had a few comic set pieces where I constantly misunderstood "houtian" (the day after tomorrow) as "the day before yesterday" which did not help the fine-tuning of my complex arrangements. He was no doubt relieved that today I had a young translator with me so he could impress upon her the necessity for me to get myself to a Chinese doctor to get the right herbs for my cough. I imagine that to him I am a venerable grandma and he wonders what on earth I am doing gallivanting around Beijing on my own.

The other factor causing my more optimistic view of the world and my place within it is the three interviews I have completed in the last three days. Bingyi, with her complete radicalisation of ink painting conventions, and her refreshing and somewhat weird take on the world, is always a delight. She thinks the notion of gender is utterly insignificant, as we are all nothing but specks in the universe. However, she did tell me that feminism makes her a little bored, as she likes to have men around "for my amusement."

Yesterday I had a second conversation with the young and very successful painter, Han Yajuan, who told me that after our first meeting last October she has been reconsidering the notion of gender in her work, especially as it has played out for her generation, born in the 80s and coming to adulthood in the 90s, heirs to a completely transformed China. She thinks they had no education about gender, raised at the end of the Maoist period, and hence have struggled to form an identity and to find values. A searching, confused generation. Her new work returns to memories of childhood, creating allegories on circular and oval canvases which are both nostalgic and disturbing.
From Han Yajuan's studio on the 21st floor of an apartment building in Wangjing, looking over freeways, overpasses and more concrete towers, we drove to 798 and a studio at the back of this complex of galleries, shops and studios - once an East-German designed factory "work unit" where people lived, worked, went to school, gave birth, and spent their entire productive lives - now more often given over to fashion shows, wedding shoots, TV commercials and wandering tourists than to the business of serious art. Here the wonderful painter Yu Hong has her studio.

She found time for me amidst the apparent chaos of a fashion shoot for Tiffany, who have asked her to paint the tennis star Li Na and the most famous movie stars in China. I asked her if she saw any tension or conflict with her serious practice as one of China's best known figurative painters, and she seemed a little bemused. This willingness to challenge the conventional boundaries between fine art and design (or, the more cynical might say, between art and branding)  links her with other, younger artists such as Han Yajuan and Bu Hua, both of whom are interested in "derivatives" - product designs based on their works.  No different to Tracey Emin or Yayoi Kusama working with Louis Vuitton I guess. Interesting times, where boundaries are blurred. In fact Han Yajuan tells me that she thinks this is actually a Buddhist concept as it challenges the authority of the art masterpiece.
I have long admired Yu Hong's work - and that of her husband, the great Liu Xiaodong - and the way in which she is able to meld Western and Eastern influences so seamlessly. The gold backgrounds in her paintings refer explicitly to Song Dynasty masterpieces but also to the canon of western Renaissance imagery and to notions of the sacred and sublime. Yu Hong tells me that, growing up during a period of great privation and austerity, she was lucky to have access to books with art images and to the Soviet tradition of painting, as her mother was a successful painter and professor. She felt she was on a pre-destined path to become an artist.

Today I went to see work in the Today Art Museum - some good, some not so very. And then to Vitamin Creative Space to watch Cao Fei's latest work, completed last year and collected by the Pompidou Centre, a 45 minute epic narrative video work called "Haze and Fog". It should be no surprise that this artist, with her love of popular culture, has been drawn to horror, and this, of all things, a zombie movie set in north east Beijing, with a large cast of characters including housewives, real estate agents, cleaners, security guards, a prostitute, a peacock and a tiger - and zombies! Ava Gardner once said that Melbourne was a great place to make a movie about the end of the world. Much as I love Beijing, there are days in the apocalyptic dust and smog haze when I think the same applies, But not tonight. Tonight I am "Happy in Beijing" 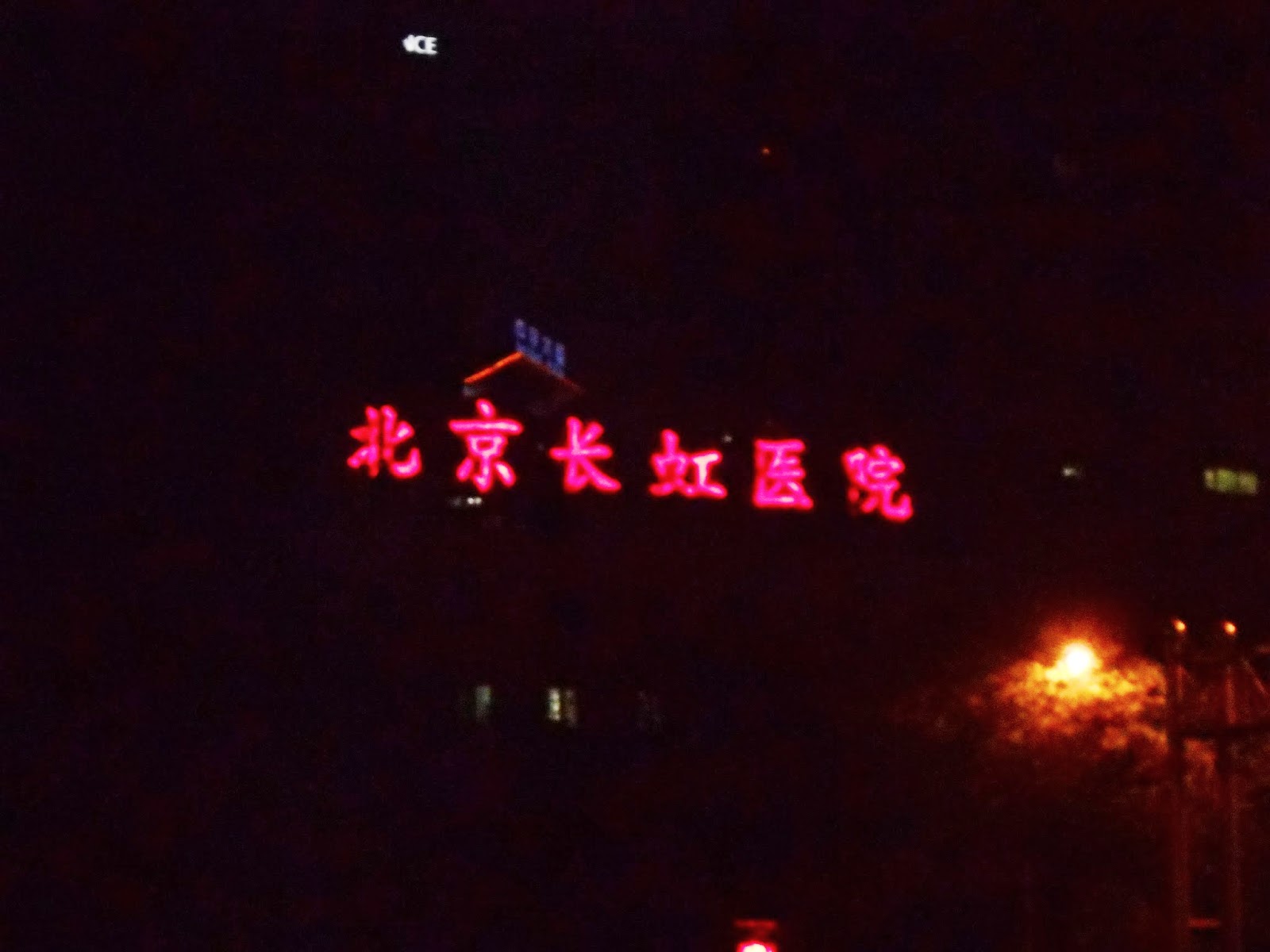 Posted by An Art Teacher in China at 7:57 AM