I have been home from China for only 2 days, and while it is very good to be home with friends and family in a place where you can drink the water and breathe the air, I am already missing the palpable excitement - and strange unexpected beauty - of Beijing. Grey and red are the memorable colours. Grey streets, grey courtyard walls and grey skies, punctuated by flashes of red everywhere - lanterns, signs, clothing, courtyard doors....I asked for a red bag and the shop assistant said, "You are like us - we Chinese love red." It is of course the colour word that I most remember. "Hongsi de" falls easily out of my mouth when I am trying and failing to remember the words for other colours. This is why I have ended up with red socks, tights, hats, gloves and notebooks when really I may have preferred black, grey or purple. 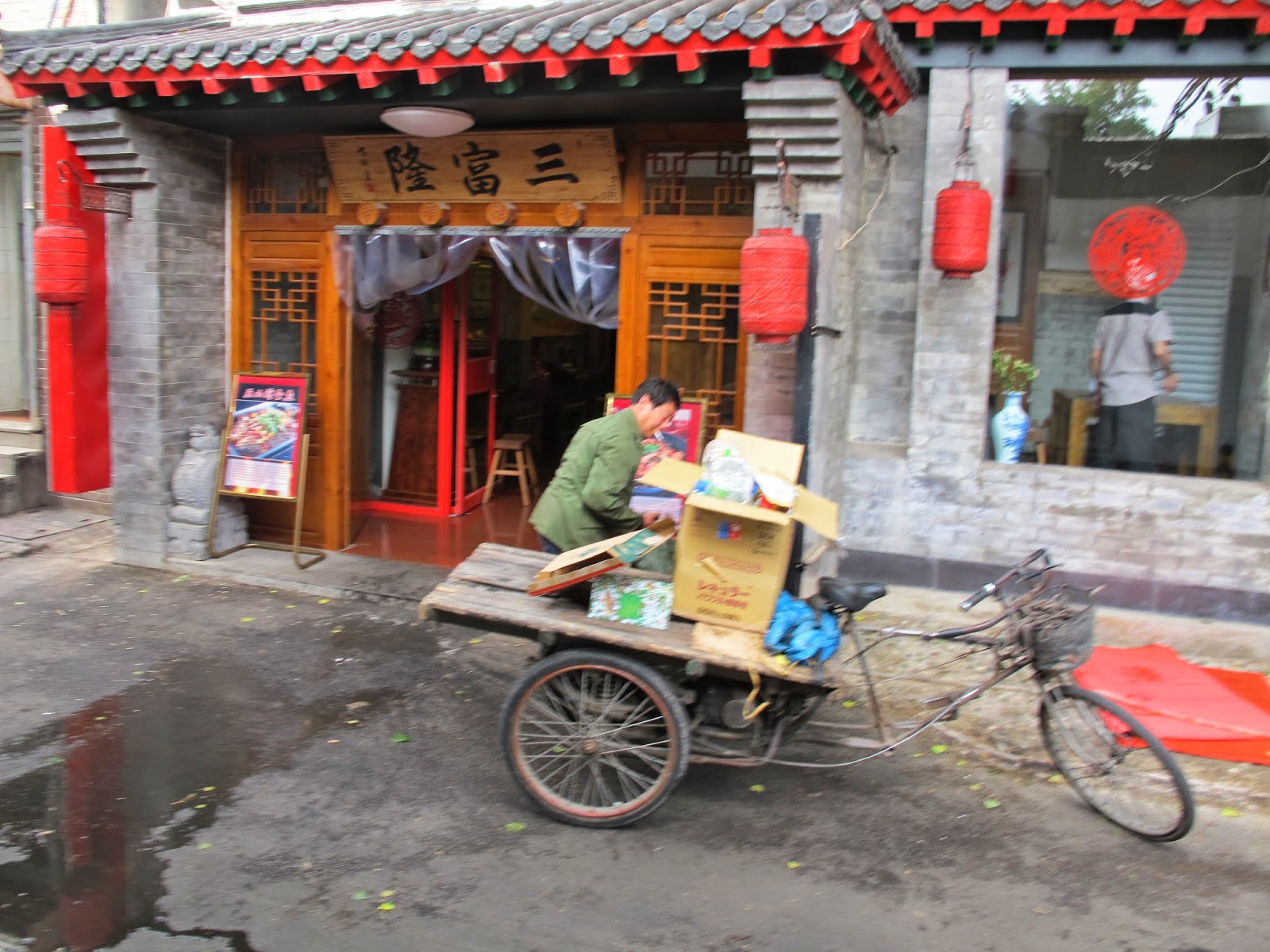 Here are more of my unanswered questions about Beijing life, eternal mysteries: 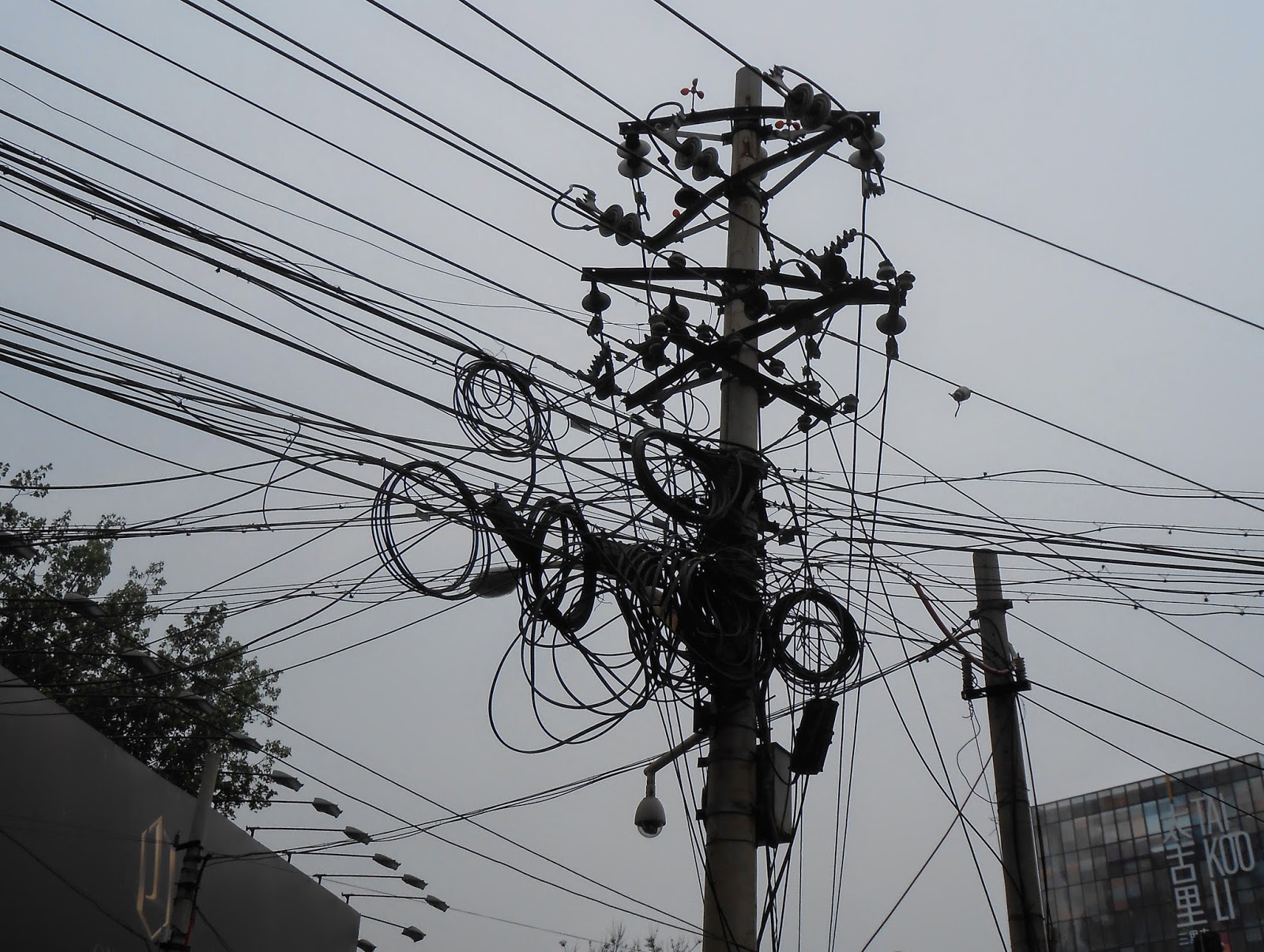 But on the upside - and what an upside - where else can you walk in 2 minutes from restraint and serenity to cheerful chaos and life lived amongst rubble and disintegration? And yet there is always beauty - whether the bamboo bird cage or the texture of a wall scrawled with hasty characters, the unexpected willow tree, the weathered red door of a courtyard, or a small child playing happily in the dust. 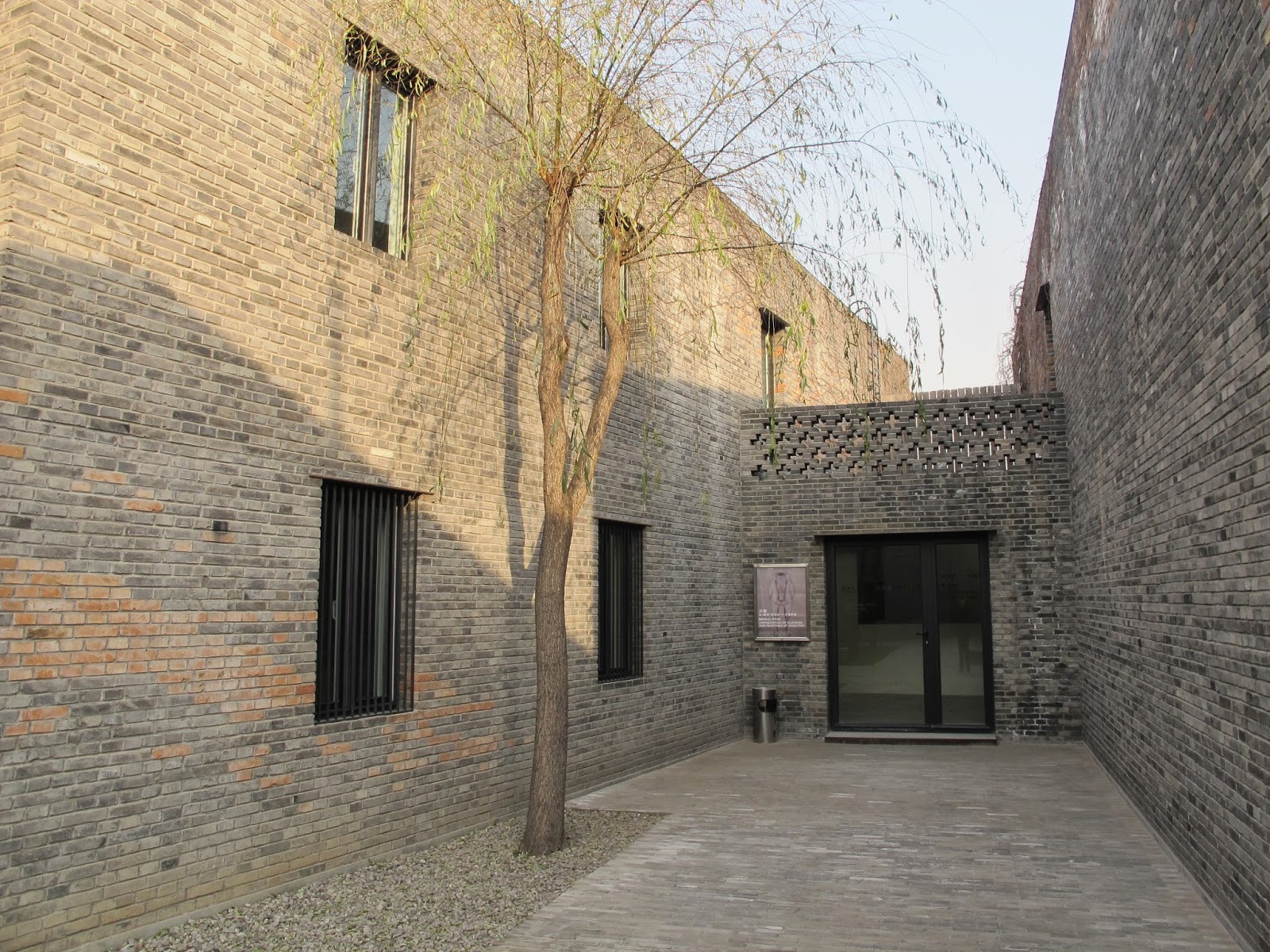 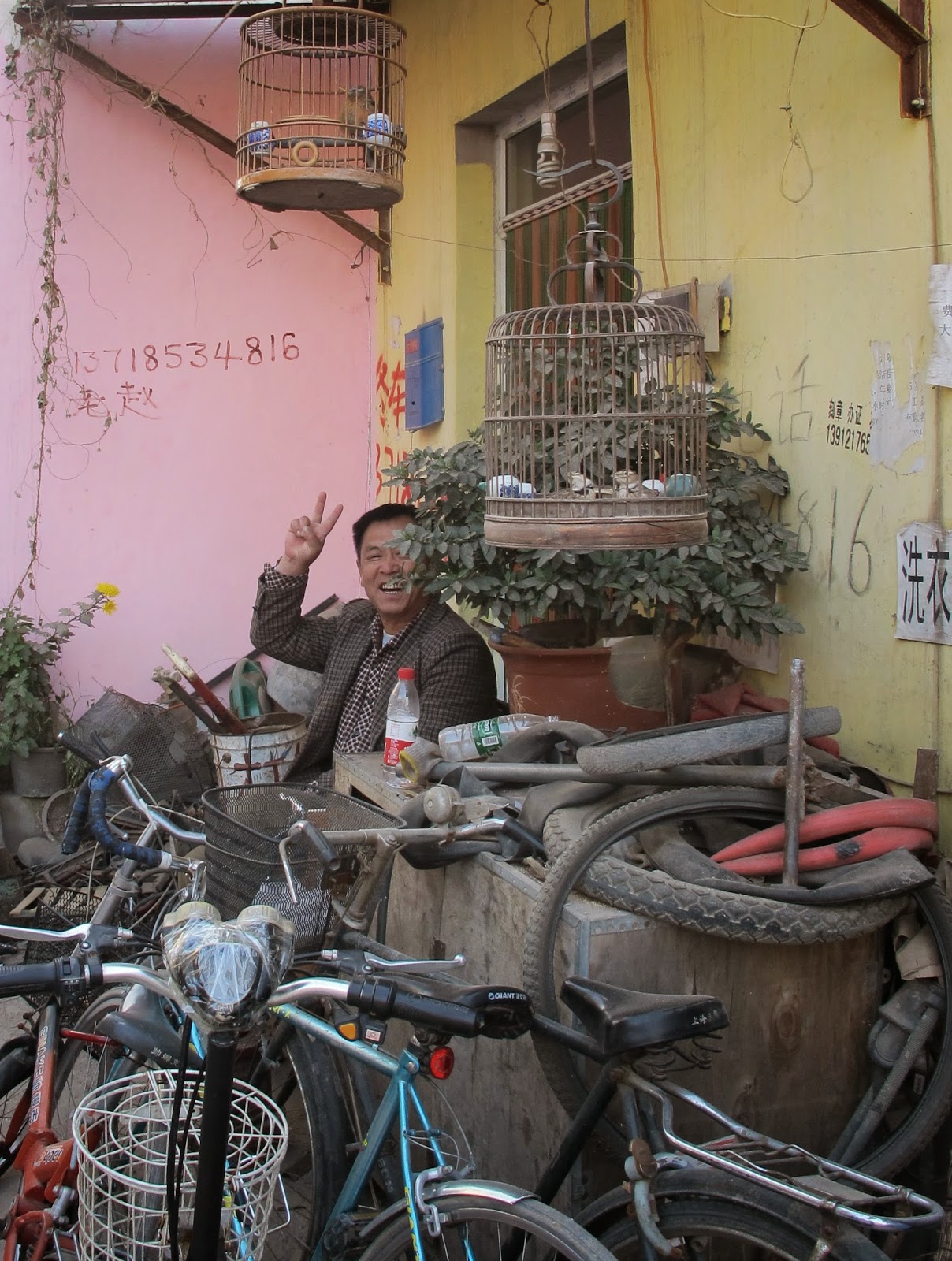 Where else can you see quite such a collision between two worlds? The beautiful studios and galleries designed by Ai Weiwei (including his own) in Caochangdi are set amidst village streets teeming with life, where migrant workers and taxi drivers live in tiny houses and apartments above a jumble of shops and stalls, and vibrant street markets sell everything from electrical goods to vegetables, from car parts to underpants. 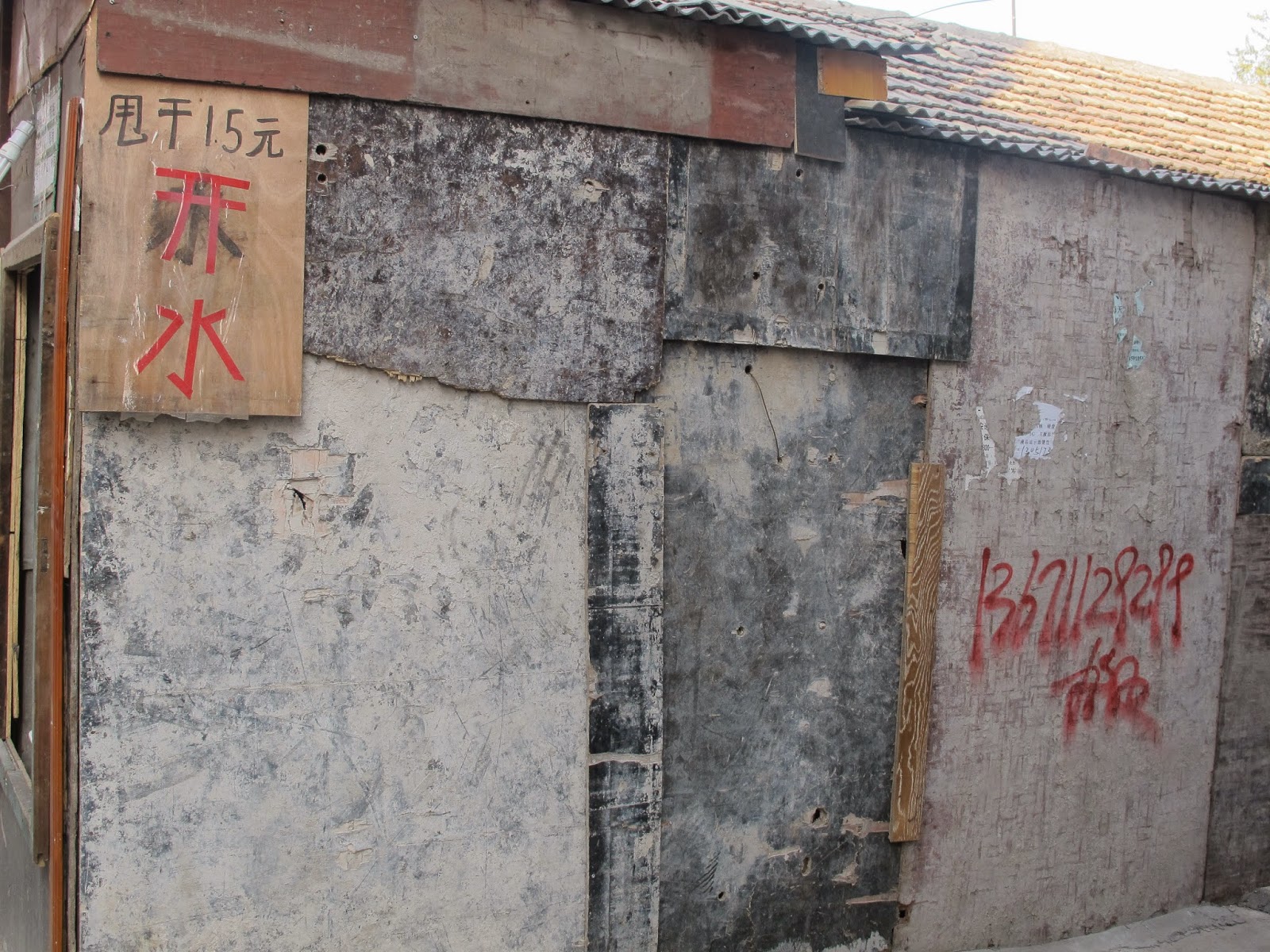 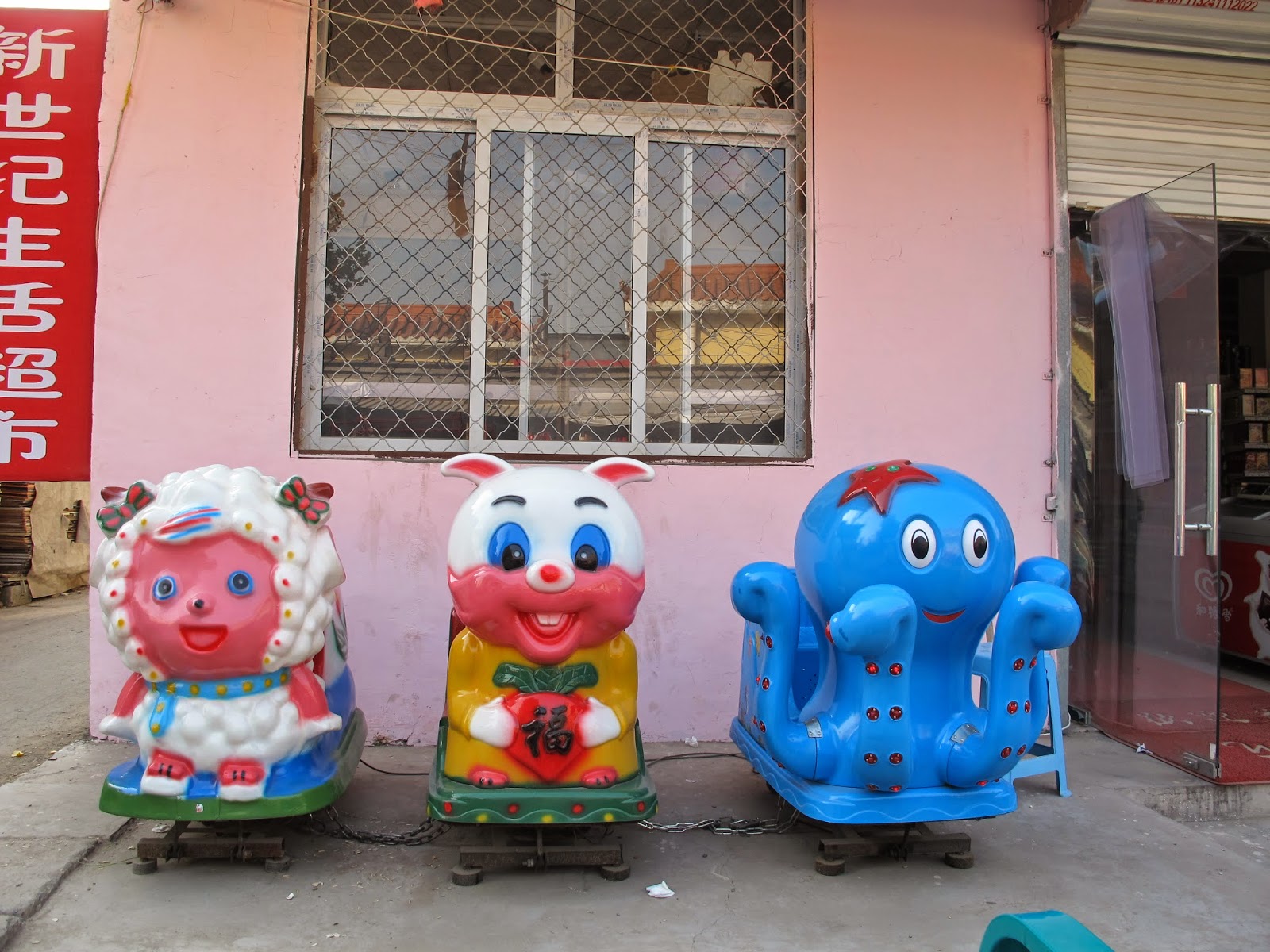 Where else can you see so many people dancing and singing in public? The life and leisure lived publicly in the parks is my favourite feature of Beijing - and Chinese cities generally. Every walk brings with it some new event to wonder at - from beautifully fluid Tai Qi to fan and sword dancing; from rollerskaters to mahjong and card players; from men with their beloved birds to vigorously exercising octogenarians. Endlessly fascinating. 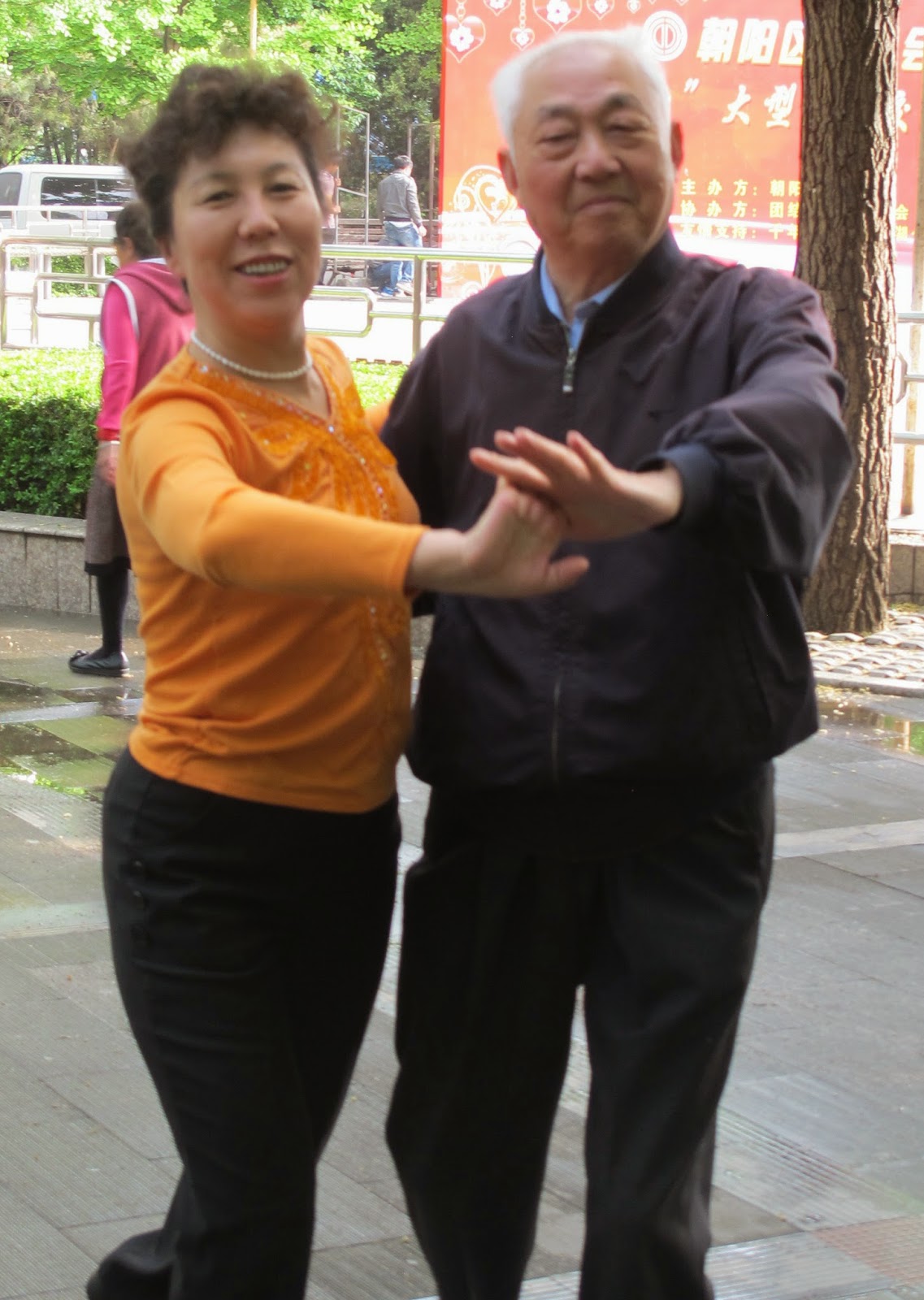 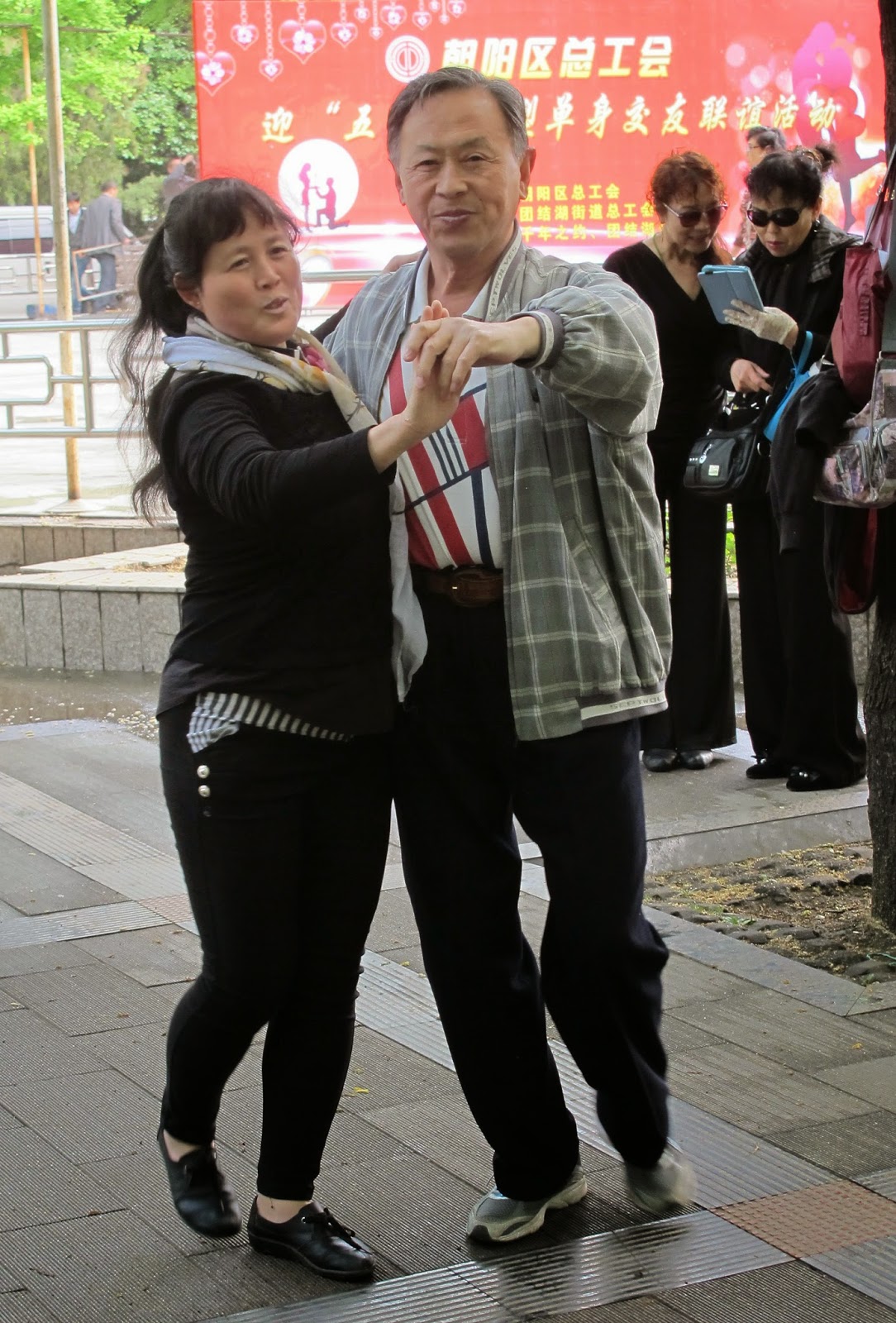 Where else can you eat a huge bowl of hand-shaved noodles - with a bottle of Yanjing beer - for less than $2? You must of course be willing to not look too closely at the surroundings or the crockery. Delicious! 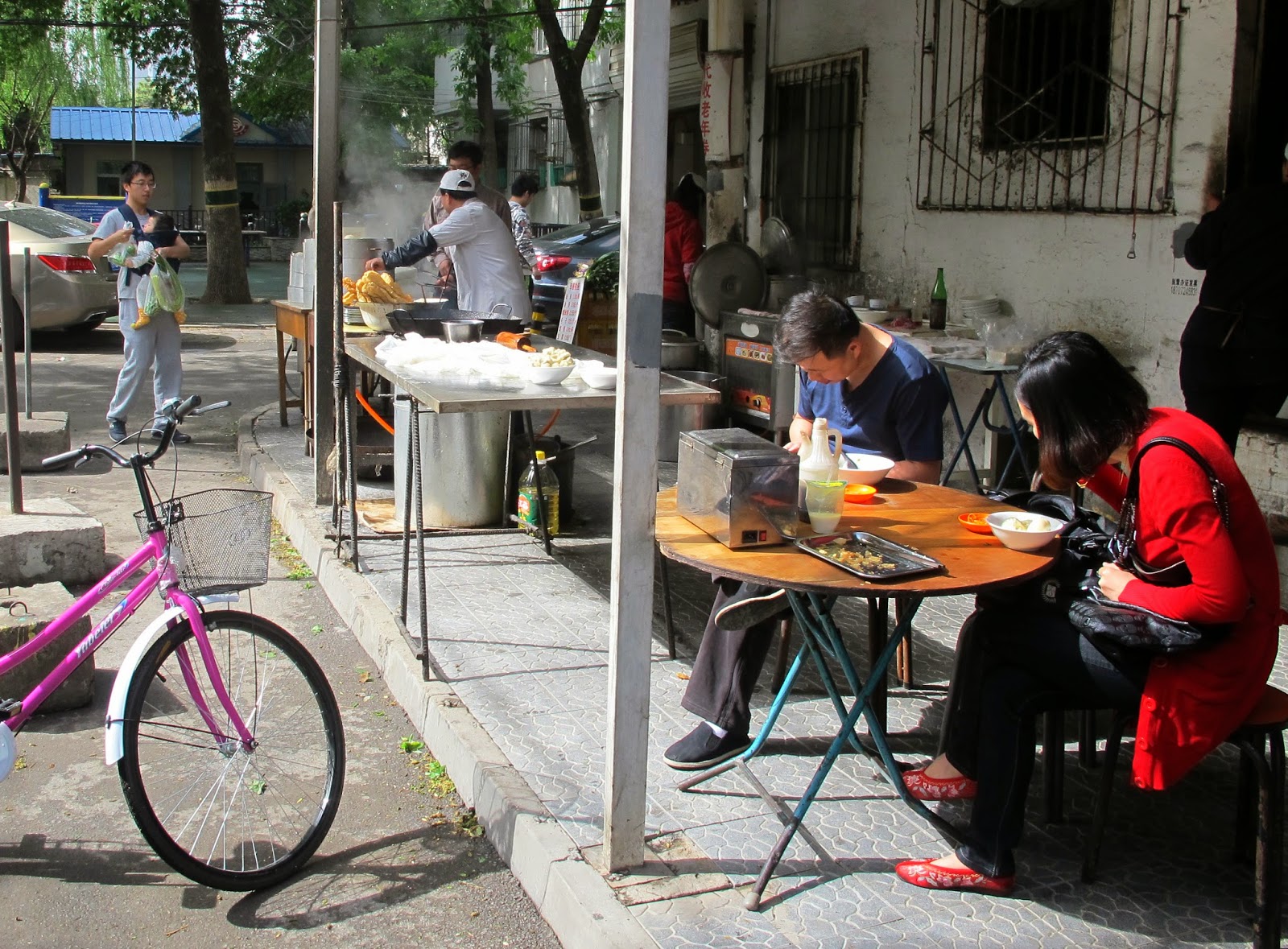 Where else can you find, within a single city block, swanky hotels and international shops (Nike, Apple, American Apparel, Prada, Miu Miu) jostled against cheap bars, local markets, sellers of street snacks of all descriptions, and old apartment blocks? Very expensive new cars push their way through intersections but are often cut off by pedicabs and tiny steel "beng beng" taxis - essentially a three-wheeled motor scooter with a cabin. 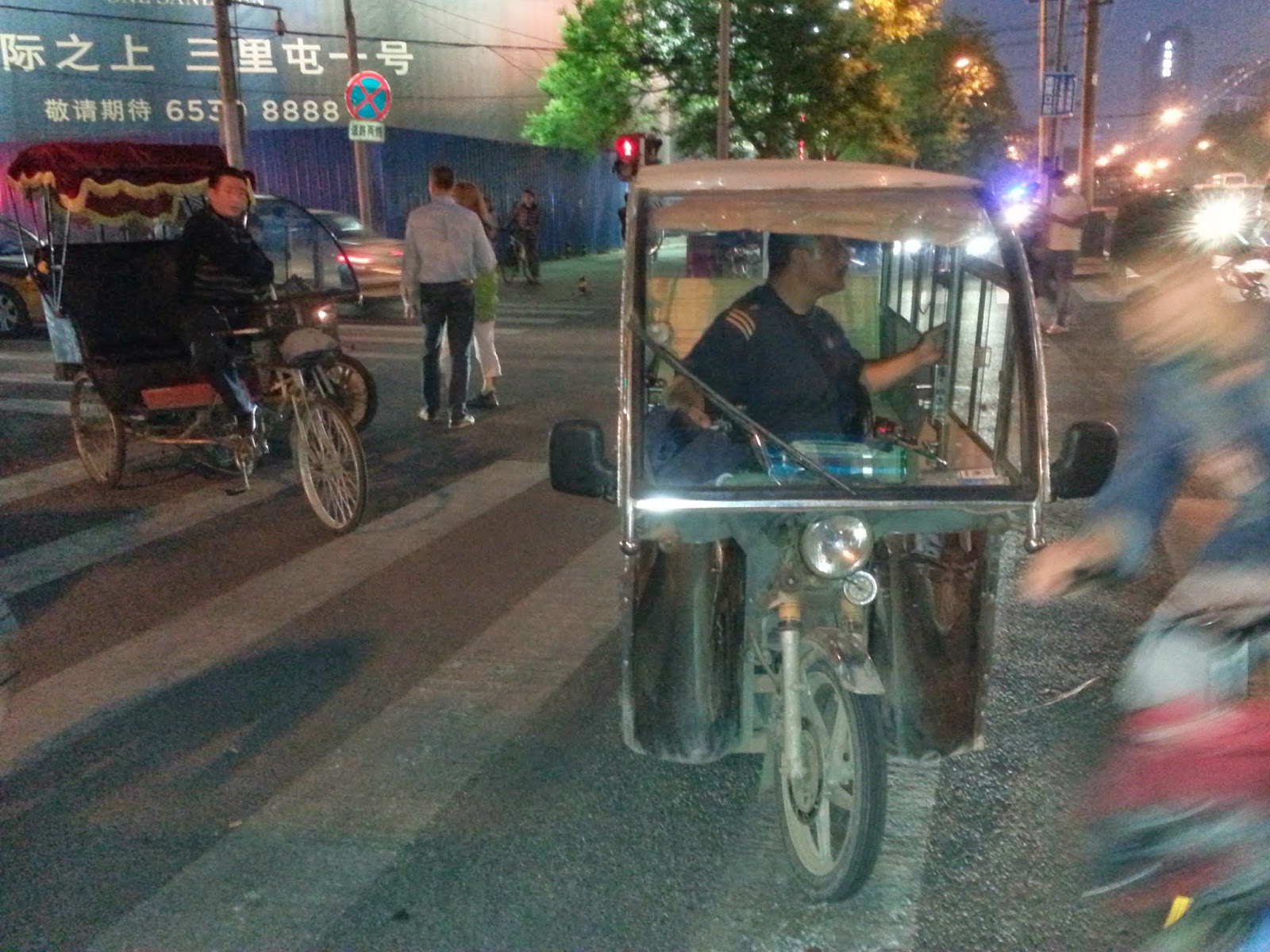 Blind beggars on Gongti Bei Lu play the erhu as the newly wealthy climb out of their BMWs and chat loudly on their phones. In one block there is both a Daimler showroom and - yes, really - a showroom selling private planes. The juxtapositions may be uncomfortable but they are certainly interesting - and so revealing of a society in flux and transition. The young real estate agents line up outside the Homelink Office and sing the Homelink song each morning with their heads thrown back like footballers singing the national anthem."I promise I will strive for excellence and have no fear of difficulty," they solemnly chant, "We need to cooperate with each other and work together to make a brighter future." Outside shops and restaurants workers stand to attention and are harangued by managers. Every morning. And I thought meetings in my workplace were boring!

And, above all else, for me the fascination is always the art. Where else can you be invited into the enormous studio of an extremely well-known artist and have him cook noodles for your lunch? In 13 days I met and interviewed 15 fascinating and very different artists, and once the richness of the experience has had a chance to "percolate" for a little while I will write an account of some of these meetings in a future post.

Highlights so far are too numerous to mention, but they include: 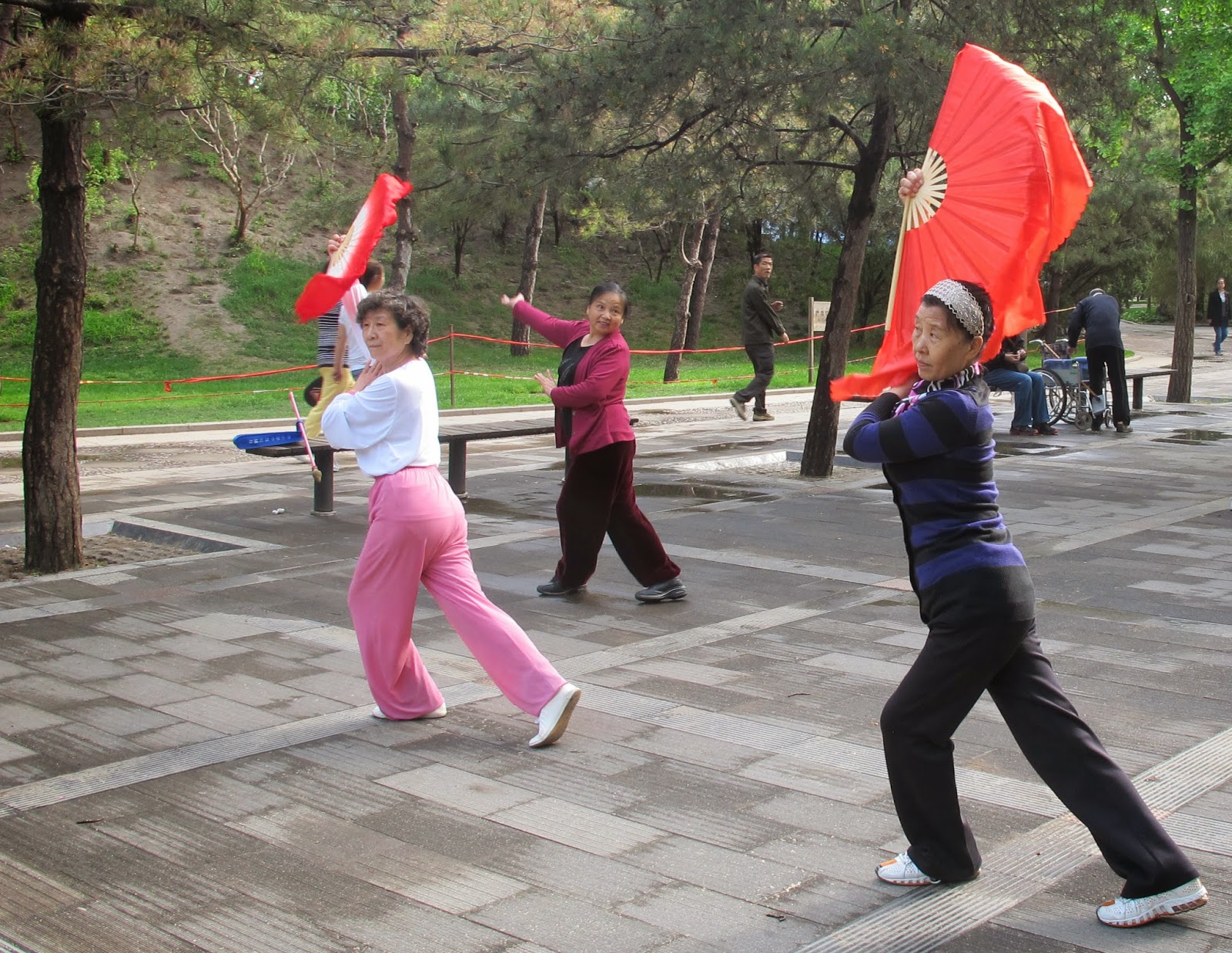 Beijing, wo hui lai! 北京我会回来 I will return!

Posted by An Art Teacher in China at 6:34 AM