I am getting myself organised to go to China in just over a week, my second trip this year. My last visit was in April, and Beijing was leafy and warm, mitigating the overall greyness of the city, which I must admit I have come to love. This time, in December, I am preparing for the cold. The last time I spent part of December in Beijing, back in 2012, I had never been quite so cold before in my soft Australian life.

I have a ridiculously big line-up of artists to meet, including Tao Aimin, Cui Xiuwen and Ma Qiusha, as well as photographer Zhou Hongbin, all of whom I have admired for a long time. Tao Aimin's work, 'Book of Women' resonates with the research I have been doing about the ancient secret women's script of 'Nushu'. Cui Xiuwen's video work 'Lady's Room' was the cause of the first lawsuit in contemporary Chinese art. It shattered many taboos - about prostitution in the "new" China, about the boundaries between public and private space, and about notions of femininity and the expectations of "good" women. Her later works in video and digital media layer past and present, memory and dreams, in the way we have come to expect in Chinese contemporary art.
Ma Qiusha is one of a number of performance artists I will be interviewing on this trip. The theme of bodily inscription, physical challenge, and various enactments upon and by the body is a powerful continuing thread in Chinese contemporary art, ever since the experimental days of the Beijing East Village artists in the late '80s and early '90s, and the iconoclastic performances of Zhang Huan and Ma Liuming. It's a kind of endurance which, although owing something of a debt to Beuys, and something more to Marina Abramovic, is peculiarly Chinese. Stoicism in the face of suffering - akin to "eating bitterness" perhaps. Ma Yanling told me about her interest in Ma Qiusha last year, when we were talking about her own "Nushu" performance pieces, in which she and her daughter wrote on each other's bodies in the ancient script. You can read my interview with her, 'A Secret Script: The Painting and Performance Work of Ma Yanling' on the Creative Asia website. (Click HERE for that article.)

She described seeing a performance in which a young artist spoke with razor blades in her mouth, interpreted by Yanling as a metaphor for the powerlessness of young women in the face of parental and societal pressures. This turned out to be a very significant work, From Pingyuanli No.4 to Tianqiaobeili No.4 (2007) "Ma Qiusha’s career was born through pain... the camera records her as she removes a bloody razor blade from her mouth after she finishes narrating her experiences." (Randian.) Art critic Iona Whittaker described her early work as possessing "a spiky intimacy paired with a girlish aspect (like a kitten with needle-like claws)" - a bizarrely intriguing description which makes me eager to find out how the artist herself thinks of her practice. 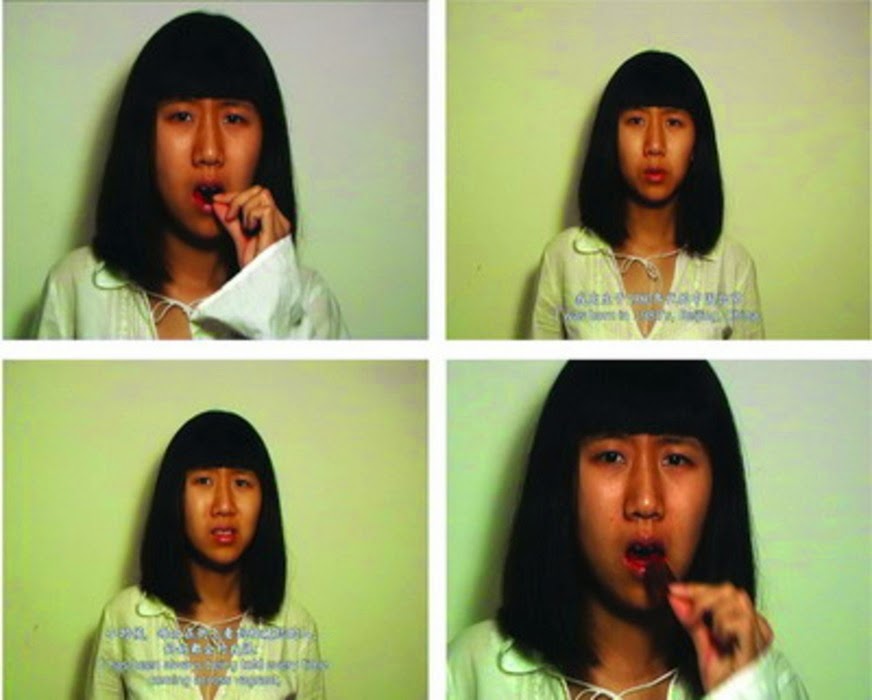 So, for accounts of my meetings with these artists, and many others, watch this space!

I am returning to the part of Beijing where I feel most at home. In Tuanjiehu Park I look forward to new encounters with the dancing grannies, the water calligraphers, the choirs singing revolutionary songs, the ballroom dancers, erhu players, kite flyers, Tai Ji Quan practitioners and vigorous octogenarian exercisers. No time for more Chinese classes this time, so I shall have to bumble through as best I can with my broken and ungrammatical Mandarin, hoping that I don't make too many shocking faux pas and relying as always on the good nature of the Chinese. Beijing taxi drivers have been amongst my best language instructors to date, although they occasionally teach me swear words and then appear shocked and horrified if I repeat them.

From Beijing I go to Shanghai, again for meetings with artists including the wonderful painter Wang Zhibo in Hangzhou, where I wish I could stay longer. And for the Shanghai Biennale in the Power Station of Art, always a mixture of awe, astonishment and bemusement for a whole range of reasons.

So, amidst all the usual end of year stress, Christmas shopping and ticking of lists, I am checking the VPN to bypass that Great Firewall,emailing artists, figuring out how to use "wechat" instead of Facebook (it's great!), lining up translators and drivers, purchasing the obligatory antibiotics (because I seem to get sick every single time - that Beijing "airpocalypse" no doubt to blame) and - finally - packing the bags.

北京我来了! Beijing here I come!
Posted by An Art Teacher in China at 4:04 AM