I write this post sitting in my apartment high above the noise of the Third Ring Road insanity and the Tuanjiehu Subway Station, at 8.30 on a Saturday night after returning from a gallery opening at 798. My dinner tonight consists of the red wine left in the cupboard by a previous resident (many thanks!) and some peanuts with Sichuan pepper, the resulting combination numbing both brain and body. I may decide to follow this up with some "Bimbo" brand bread spread with delicious "Kewpie" brand jam. Why? Because I can. And because after three days in Beijing I am completely exhausted.The thought of going out and seeking dinner requires way too much energy at this point.

Here are some things that I forget about Beijing and which come back to me in a flood of sensation every time I return to this unforgiving but marvellous beast of a city: 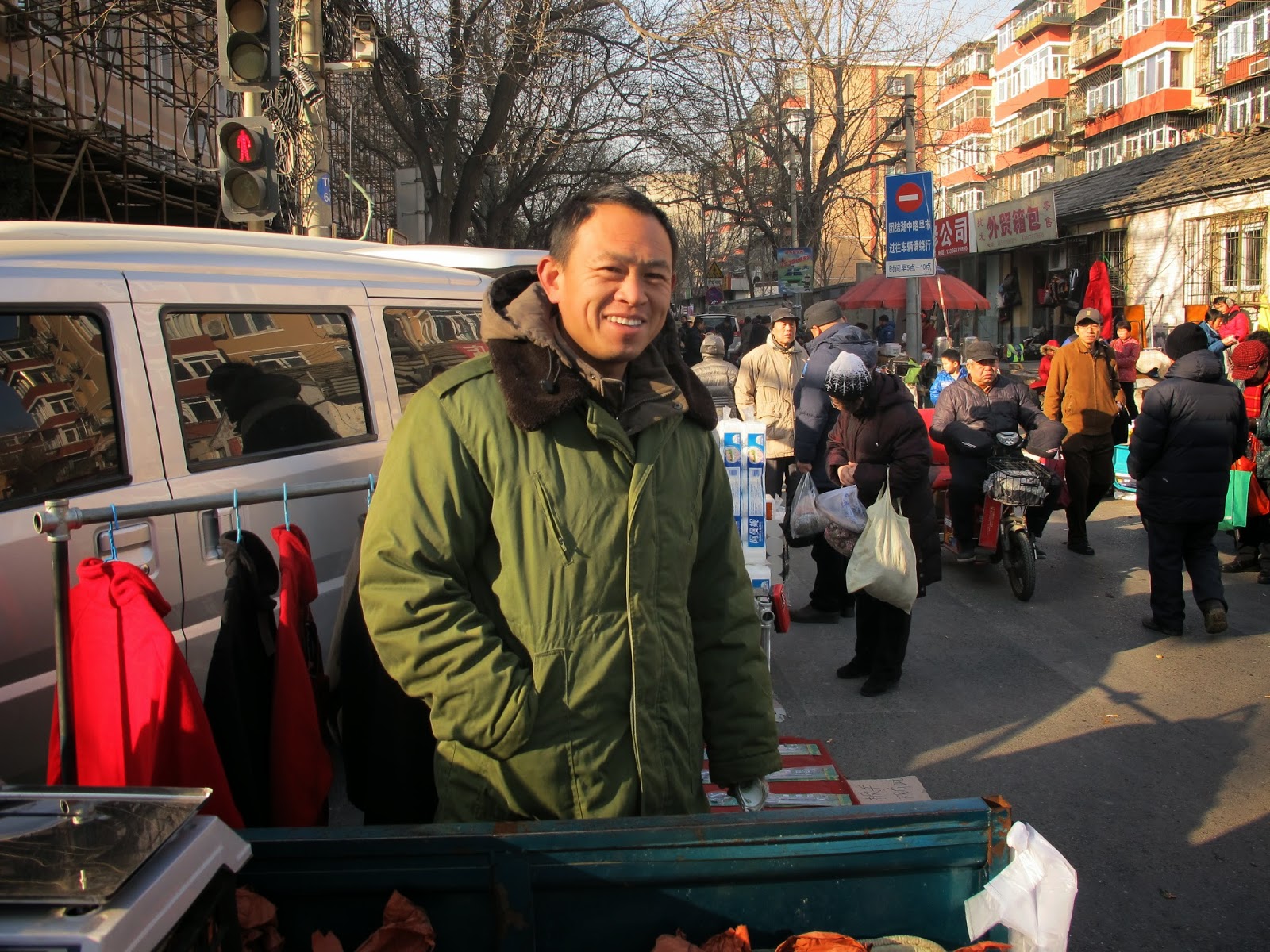 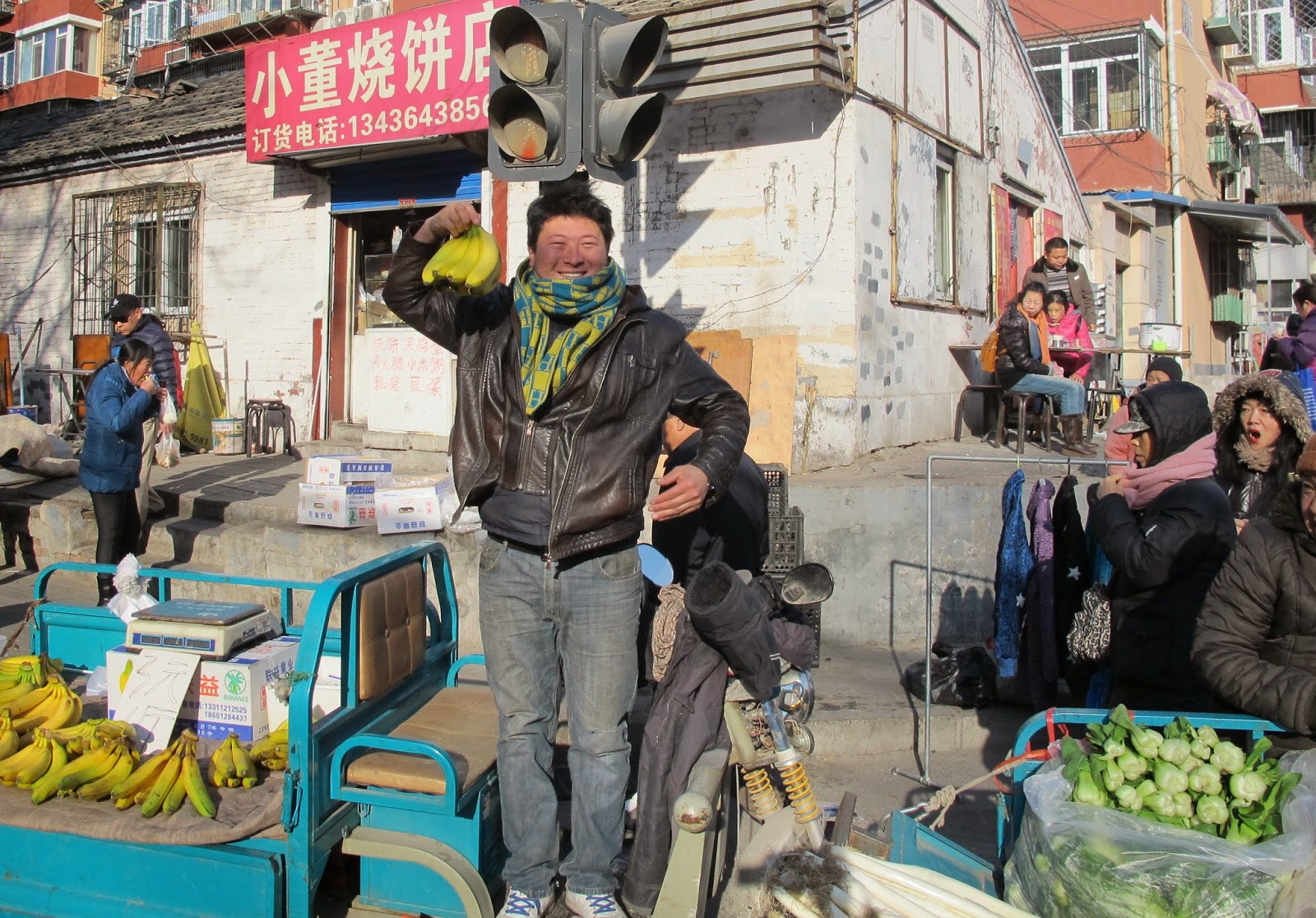 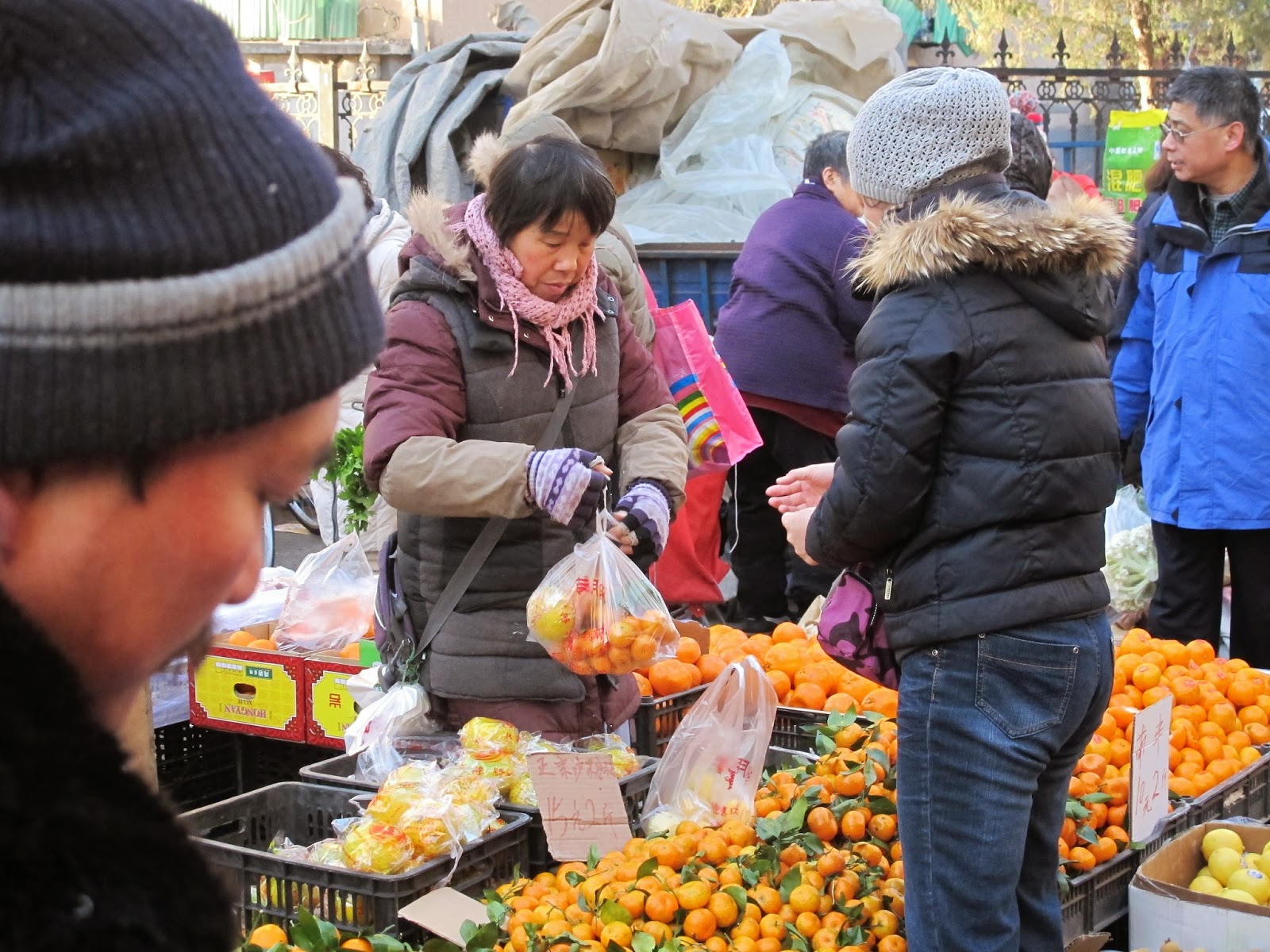 5. Tastes - the "xiao bing" pancake cooked with egg and shallots on a griddle in the market and the jiaozi stuffed with meat or vegetables. Noodles shaved off a huge lump of dough and cooked in front of you. Pineapples cut into swirling sculptural shapes. Tiny intensely sweet mandarins. Pomelos from the south. The market is a sensation - beans and sunflower seeds, black sesame being ground into paste as you watch, incredible mushrooms, fish and meat and eggs and amazingly beautiful vegetables. 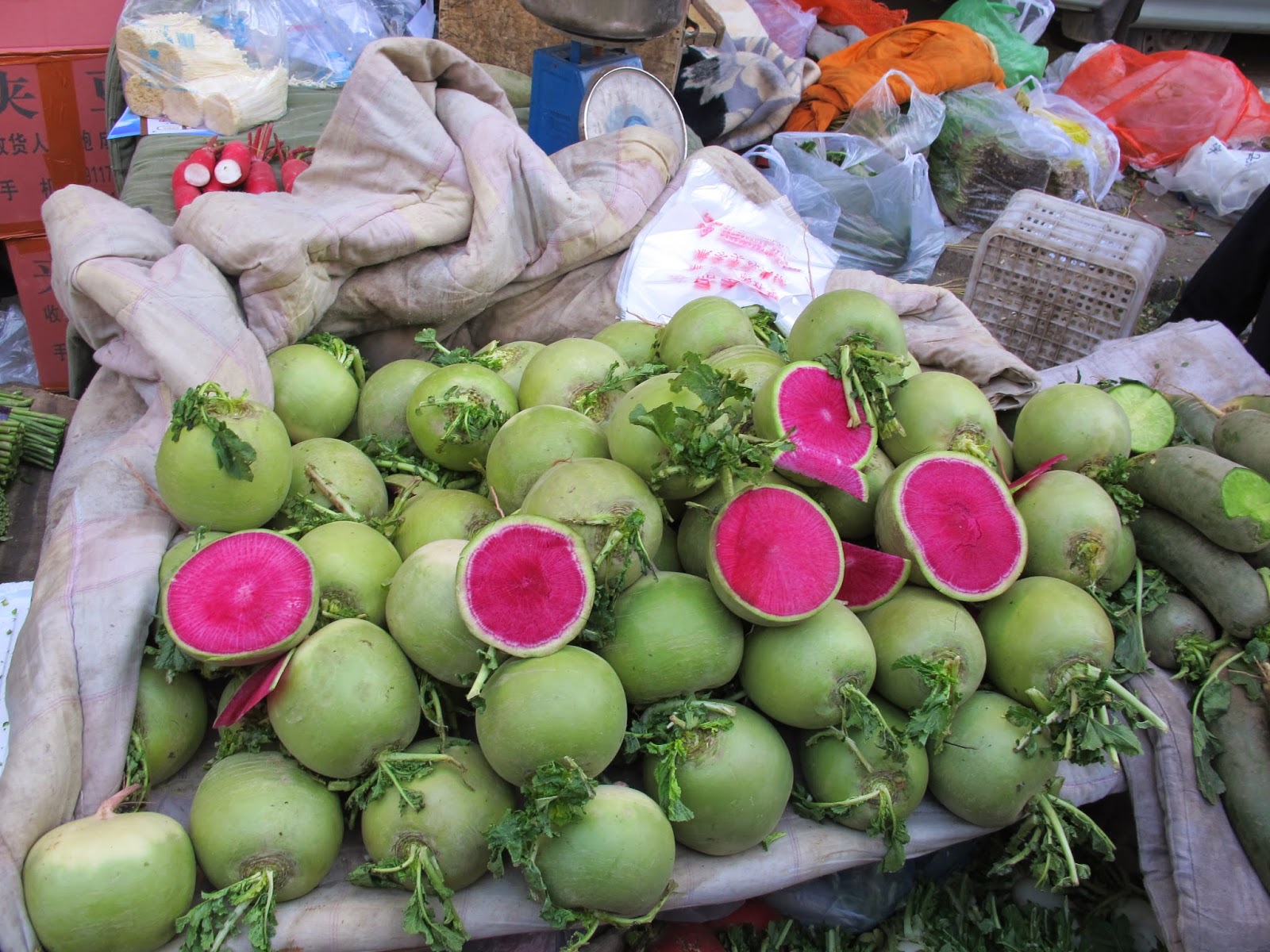 6. The craziness of the traffic - I know, I know it's a cliche, but a Beijing traffic jam has to be seen to be believed. As a passenger, though, I can look out the window and marvel at the old man riding a three-wheeled bike with leopardskin-look gloves attached to the handlebars, the young man with the cool haircut talking on his cell phone while he navigates nonchalantly through a traffic tsunami, and the guy with an entire household of furniture strapped to the back of a motorcycle.
7. Again a cliche, but the juxtapositions of wealth and poverty in this city are breathtaking, Yesterday I drove past the gates of a very swish condominium called, without irony, "Capital Mansions." Outside the gate a stooped old man in a PLA greatcoat swept the street with a straw broom. This is "Socialism with Chinese characteristics."
8. The fact that everything appears to be held together with Scotch tape and string, including my hot water system. Everything sort of works but nothing quite works. A test of patience for spoiled Westerners and a cause of shrugs from the Chinese. When will things be fixed? "Mashang!"- immediately! You discover quickly in China that this is a very elastic term, meaning many things, such as "I have no idea but I don't want to tell you that because I might lose face" to "Maybe next month, but quite possibly never" to "Well, life is shit so what do you expect?"

All of that aside - there is the art. And it is amazing. Despite the fact that I have just returned from the opening of a major exhibition with lots of hoopla that, frankly, left me cold (have we not moved on from a "performance" by a guy with a needle in his arm collecting his blood in a cup which spilled onto the floor? I mean, really? Have we not?) there are so many extraordinary artists here.
Today I spent an hour with the pioneering performance artist He Chengyao, who lives and works in a converted greenhouse (surprisingly warm, and somewhat like a hobbit house with its curved roof) on the city's northeastern outskirts. She is known for works which stem from her very difficult memories of childhood and family, using her body in confronting and painful ways. From the moment when she spontaneously removed her clothes and walked on the Great Wall, to her  naked "conversation" and virtual chess game with Marcel Duchamp, she has always been interesting and transgressive. To those who might be tempted to dismiss this as an imitation of 1970s performative practice, I would say: find out about her background, and her struggles with the mental illness of her mother, a result of the Cultural Revolution. Today, however, she told me about the year she has just spent in Tibet, teaching Chinese language in a monastery, and how this has changed her life and her art. She showed me very beautiful scrolls which she pierces every second with an acupuncture needle, creating rhythms of 60 second intervals, as a form of meditation and of measuring time. It requires enormous focus and great control. The resulting works on paper are extremely beautiful and restrained. From there I went to an entirely different kind of space to meet Cui Xiuwen. Cui, whose work "Lady's Room" caused the first court case in the history of contemporary Chinese art, has shifted from digital works featuring her altar-ego, a beauiful "Young Pioneer" who represents her childhood memories and the pressures of being a good Chinese child, loving the Motherland. She is now developing abstract works exploring the spiritual dimension, resulting from her study of Buddhism.
Yesterday Ma Qiusha spoke to me about her performance works and how they represent the pressures experienced by the '80s generation. For a child of parents who had lost their education in the madness of the Cultural Revolution, the pressure to succeed both materially and in every other way is enormous. Later, in the car, my young translator said she was thinking of her mother, who had to give up her education in order that her younger brother could be educated - or else the family would have considered giving him away. The consequence of these bitter family stories is a huge pressure not to disappoint or shame parents who have struggled so much and experienced so much hardship.
More about Zhou Hongbin, Huang Jingyuan and Fang Lu in a later post. I continue to be humbled by the openness and honesty of the artists that I meet, and their willingness to discuss their practice with a western outsider with such intelligence and thoughtfulness. I half expect someone to suddenly shout "The game is up! You have no business here!"  Their eagerness to communicate despite all barriers of language and culture is a wonderful thing.


And, I have to tell you, in the latest instalment of my #OnlyinChina wonderment series, today I watched a dentist in the market extracting the teeth of two patients with what appeared to be a pair of pliers. They were sitting in chairs in between the fish and the vegetables on one side, and the underpants and thermal vests on the other, with crowds of shoppers pushing past, and me stopped in my tracks in astonishment. In the next block was a big hoarding for a dental clinic, with a glossy photograph of a rather creepy looking western dentist in a white coat. "He must have failed all his exams," said my friend who has lived in China for a long time.

Posted by An Art Teacher in China at 6:11 AM