The 'icing of global modernity': After Utopia

International global modernity - from reality TV to the forces of the moneymarkets; global brands to selfie sticks - and the traditions of ancient cultures make strange bedfellows. Or do they? Perhaps there's a seamless integration - a global cultural soup - in which we all float like Alphabet Spaghetti.
Last night I attended a talk at the University of Sydney in which the past director of the Art Gallery of New South Wales (and noted China scholar) Edmund Capon, engaged two Chinese artists in conversation about how they navigate the treacherous morass of artistic freedom - and its limitations - in China. Shen Jiawei left China in 1989 with the diaspora who emigrated to Paris, New York, Sydney, Vancouver and other cities. Guo Jian dealt with his own troubles with the authorities just last year, returning to Sydney under difficult circumstances. Shen Jiawei painted propaganda pictures, very famous ones, in an earlier life, but is now better known for massive history paintings and portraits of luminaries ranging from the Pope, to Princess Mary of Denmark, to the collector and philanthropist Judith Neilson. Guo Jian enlisted in the People's Liberation Army at the age of 17, and painted propaganda pictures for the PLA. As a 'Cynical Realist' painter in the 1990s he overtly explored the nature of propaganda in pop-inspired paintings. The conversation was measured, and, it must be said, a little guarded, but interesting in that each artist represents the experience of living and working in two entirely different worlds. 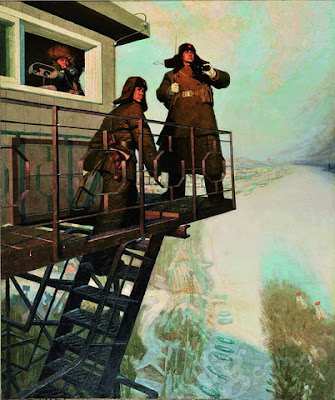 Capon played a role as the urbane western observer, inevitably on the outside looking in despite his long experience of China (first visiting in 1972, touring cadre schools, tractor factories, Potemkin communes and operations carried out under acupuncture) and his scholarly knowledge of ancient China. He appeared bemused at times, confessing he is completely mystified by the art market in China. "Who is buying all this stuff?" he exclaimed, after Guo Jian revealed that in the artist 'village' of Songzhuang there are, by some estimates, 20,000 artists living and working at any one time.

He spoke of the apparent materialism of the younger generation in comparison with the political commitment of the older, and I struggled to contain my disagreement. Artists born in the '80s and '90s may have come to adulthood in a dog-eat-dog aspirational and individualist world, where the phrase 'Serve the People' seems a quaint relic of a discarded past, but in my experience they are no less serious about the comments they make about their world. There are many ways to be political, and subversive images of Mao are no longer at any kind of cutting edge. Women artists, in particular, are seeking ways to explore the particularities of their lives, in hugely diverse ways, something which I explore at length in my forthcoming book, 'Half the Sky: Conversations with Contemporary Women Artists in China.'

Nevertheless, Capon is always good for a snappy quote, and last night was no exception. He showed images by the great ink master, Ba Da Shenren, to explain that rebellion was nothing new in Chinese art, before telling the assembled audience, 'The icing of global modernity on the cake of Chinese tradition is getting thicker and thicker - but there is still plenty of cake left.' This, certainly, seems a self-evident truth, and many artists in the major centres of Beijing, Shanghai, Chongqing and Guangzhou are embedding traditional practices and philosophies in their work, in ways both more and less obvious.

The strength of traditional culture was evident in an excellent exhibition I saw a few weeks ago at the Singapore Art Museum, 'After Utopia: Revisiting the Ideal in Asian Contemporary Art.' My review of the show is published today in 'Daily Serving':


After Utopia: Revisiting the Ideal in Asian Contemporary Art at the Singapore Art Museum (SAM) explores the dissonance between our innermost longings and the contemporary world we have created. Gunter Grass said, rather gloomily, that melancholy and utopia are heads and tails of the same coin. Imagining perfection, we confront the contradiction between the Arcadia of our imagination and the imperfect realities of our everyday. Featuring eighteen artists and artists’ collectives from across the Asian region, the exhibition was conceived as a four-part narrative. From the potent metaphor of the garden, we move to the city as a “contested site of the utopian ideal.”[1] Discredited utopic ideologies are juxtaposed with the notion that the search for an ideal world is now a psychological, inner journey, an entirely individual pursuit.

Ian Woo. We Have Crossed the Lake, 2009; Acrylic on Linen; 194 x 244 cm. Image courtesy of the Singapore Art Museum.
Other Edens presents the garden as a site of desire in the colonial imagination. Singaporean painter Ian Woo’s  lyrical, abstract representation of foliage and water represents the solace found in the natural world. A reference to mid-20th century abstraction is evident, but Woo has invented a powerful and idiosyncratic visual language. Underlying the gestural, calligraphic mark-making of We Have Crossed the Lake (2009) is a spare restraint emerging from his deep knowledge of Chinese ink-painting traditions.
Some works reflect the bitter aftermath of totalitarian ideologies. Asian nation states today—even the behemoth of a post-Mao China—are hostage to the forces of the global market, and old certainties have vanished. Shen Shaomin’s hyper-real embalmed bodies of Communist leaders lie in crystal sepulchres, as if awaiting a call to arms that might reanimate them. Mao lies next to Ho Chi Minh and Fidel, Kim Il-sung and Lenin. Summit (2009) is a G8 meeting of cadavers. The meta-narratives of the twentieth century, like these old men, lie in the morgue of history.

Kawayan De Guia. Bomba, 2011; installation comprising 18 mirror bombs, sputnik sound sculpture; dimensions variable. Singapore Art Museum collection, image courtesy Singapore Art Museum
18 sparkling “bombs” hang in the darkened space of the chapel (the museum was once a Catholic school.)  Terrifying disco balls promising destruction, they cast shards of light onto the Stations of the Cross that still adorn the walls. At once beautiful and menacing, Kawayan De Guia’s Bomba (2011) references the bombing of Manila in World War II, but evokes the horrors of more recent conflicts, and others of the past, contrasting the glittery lure of hedonism with a dance of death.

Chris Chong Chan Fui. Block B, 2012-2014; single-channel video with sound, 20 minutes (loop). Collection of the Artist, image courtesy Singapore Art Museum
Other works explore urban alienation. Chris Chong Chan Fui’s 2012–2014 video Block B was shot in a gritty neighbourhood of Kuala Lumpur where life unfolds chaotically within a grid of brutalist high-rise apartments. Shannon Lee Castleman set up sixteen video cameras in facing apartments on Singapore’s  Jurong West Street 81. Residents simultaneously filmed and were filmed by their neighbours. The work reflects the new realities of surveillance, but also reveals the joys of the everyday within these closely-packed buildings. In unscripted exchanges between neighbours who might otherwise never have spoken, we see the possibilities for human connection in unpromising environments. Through this examination of utopias lost and found, the exhibition reminds us that the universal desire for the perfect world remains a tantalisingly elusive aspiration.

Posted by An Art Teacher in China at 4:19 AM