All Under Heaven: the painted world of Dong Yuan

I've interviewed Dong Yuan twice in Beijing (with one attempt abruptly aborted when I was robbed on the subway whilst on my way to her studio, left without even the 2 yuan needed to get through the turnstiles at the other end - a disaster story for another time.) Each time we met, in two different small apartments in enormous complexes of high rises on Beijing's furthest outskirts, I was charmed by her total lack of pretension. She is entirely, unselfconsciously herself. The second time we met, on a cold winter afternoon, I was befuddled by the incomprehensible numbering system of tower blocks, wandering helplessly, leaving her  ever more plaintive voice mail messages. Suddenly she appeared on the road beside me with her dog, wearing pyjamas. With red cheeks and with her hair roughly pulled back, she looked like a heroic girl farmer from a propaganda poster. And, in fact, she told me on both occasions that if she wasn't an artist, she'd like to be a farmer or a gardener.

Just this week my profile of Dong was published on The Art Life website. It starts this way:

A Short History of Everything: the painted world of Dong Yuan

ART LIFE , STUFF Jul 03, 201
As a student in the Experimental Arts Department at Beijing’s renowned Central Academy of Fine Arts, Dong Yuan began to document the mundane objects of daily life. She decided to paint, literally, everything she owned. Home of Paintings and Sketch of Family Belongings (2008) record, on fifty-nine and one hundred and eighty-six canvases respectively, the two apartments in which she lived as a student. 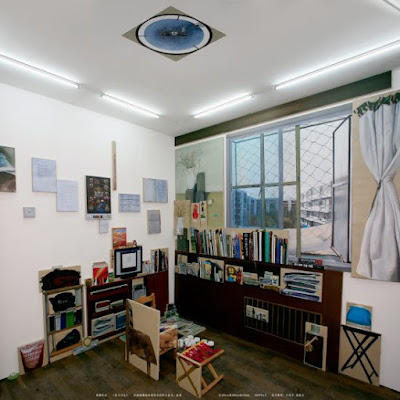 Dong Yuan, Sketch of Family Belongings, 2008, acrylic on 186 separate canvases, dimensions variable, image courtesy of White Rabbit Collection
With obsessive attention to detail, she rendered mundane objects on flat surfaces. Our gaze travels across a pair of shoes, a box of tissues, empty coat hangers, a striped towel hanging on the back of the door, an electric kettle and tea thermos, umbrellas leaning in a corner, books piled haphazardly on wonky shelves, stacks of papers, and a teapot. Some are painted with a Cézanne-inspired aerial perspective, others with meticulous trompe l’oeil illusionism. The canvases are then arranged in real space, in three dimensions: to enter the installation is to have sense of intruding on a private, domestic space. These works provide a glimpse into the world of a stranger, the same voyeuristic frisson as witnessing alternate lives in the blue light of a television screen through an un-curtained window. 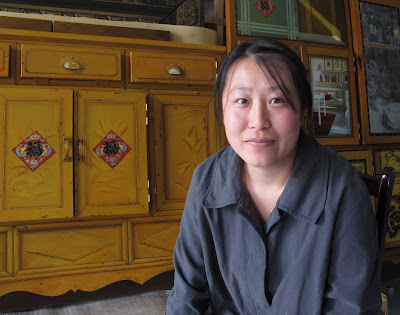 Dong Yuan, 2014, with ‘Grandmother’s Cabinet’ painting, photograph Luise Guest
Dong Yuan’s installations of multiple paintings challenge the boundaries and limitations of the medium as it’s conventionally understood. Some are steeped in nostalgia, others are wryly observed representations of the everyday, and some are purely fantastical imaginings. As a student, inspired by her discovery of the paintings of Giorgio Morandi, she was fascinated by the historical genre of the still life. Later, she immersed herself in a study of Renaissance and Flemish painting: Hieronymous Bosch, Hendrick Avercamp and Pieter Bruegel the Elder, with their sharply focused gaze on every detail of a scene, near and far, especially delighted her. 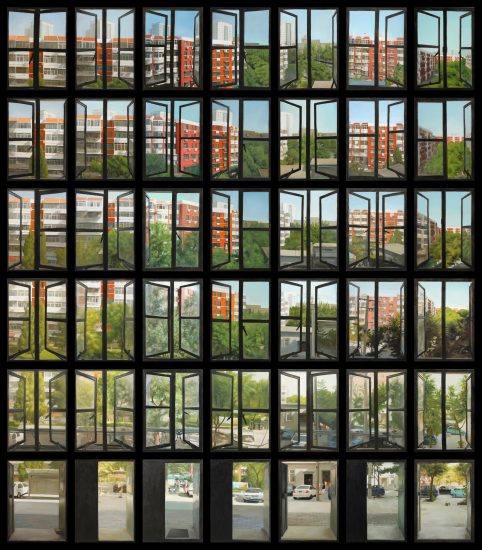 Dong Yuan, Daily Scenes, 2009, oil on canvas, image courtesy White Rabbit Collection
Dong found living in Beijing alienating and stressful. Her practice of painting the minutiae of daily life grounded her, and helped her to adjust. Daily Scenes (2009) consists of forty-two separate canvases arranged in a grid, recording the view from every stairwell window in her apartment block. Windows were an important element in traditional Chinese architecture, garden design and painting, always placed to reveal a beautiful vista for contemplation and meditation. Dong Yuan’s utilitarian windows, in contrast, reveal a bleak view of endlessly repeated apartment blocks, cars, trucks and bicycles – the sprawling suburban periphery of Beijing. There is beauty, however, in her careful variation of partly-opened windows, a rhythm evoking the comforting familiarity of everyday routines and repetitions. The sky is an unlikely blue, the trees are in leaf and not yet covered by Beijing’s yellow dust, and the typically orange and salmon pink colour of the buildings seems cheerful rather than austere. The bottom row of canvases depicts open doorways, vignettes revealing glimpses of the life of the neighbourhood: a stout man unselfconsciously scratches himself, women look after small children and hang washing amongst haphazardly parked cars. A vista that at first seems sterile is filled with the parallel lives of others. 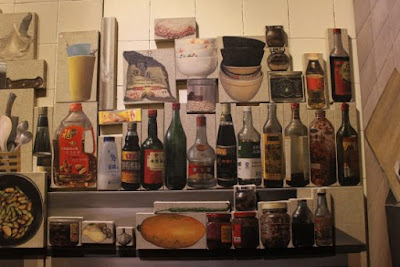 Dong Yuan, Painted Kitchen, 2010, (detail) acrylic on canvas, image courtesy White Rabbit Collection
Painted Kitchen (2010) takes us back into the domestic interior world: a cluttered kitchen lit by a bare bulb hanging from the ceiling. Rows of canvases depict bottles of cooking oil and soy sauce, stacks of noodle and rice bowls, teacups, hanging spoons and spatulas, plates of food, the porcelain sink and the stove. It is as if the inhabitants of this tiny domestic space have stepped out for a moment, and we are peering into their lit apartment, envious observers of a family meal being prepared and consumed.
TO READ MORE, CLICK HERE

Posted by An Art Teacher in China at 4:43 AM