Home and Away: A Conversation with Chen Qiulin

Wearing a sparkly baseball cap and expressing a surprisingly enthusiastic interest in trying a pie floater from Sydney institution Harry's Cafe de Wheels (and if you are not an Australian reading this, don't even ask!) Chen Qiulin seemed very young, and initially rather shy, when we met before the opening of her first Australian solo show at 4A Centre for Contemporary Asian Art. Once in conversation about her work, however, despite the inevitable slight awkwardness of doing an interview with a translator, she was articulate and thoughtful, revealing why she had chosen the unlikely material of tofu as a metaphor for contemporary China. My conversation with this significant contemporary artist was published this week, in The Art Life:

In the last few weeks Sydney has been filled with red lanterns, and lunar new year festivities of all kinds to usher in the year of the monkey. Amidst all the imagery of zodiac animals, lion dances and red papercuts, an exhibition currently showing at 4A Centre for Contemporary Asian Art is centred around the unlikely material of tofu. The first solo exhibition in Australia of significant Chinese conceptual artist Chen Qiulin is definitely something to be celebrated.


Chen Qiulin’s hometown of Wanzhou, in Sichuan Province (home of fabulously spicy tofu dishes) was partially submerged during the construction of the Three Gorges Dam, a massive infrastructure project that caused more than a million people living on the banks of the Yangtze to be relocated, their lives – and often their livelihoods – disrupted. For many years her work has documented the impact of the dramatic physical, cultural, social and economic transformation of China upon ordinary people, the “lao bai xing”, or “old hundred names”. Her ongoing‘One Hundred Names’ project involved carving the most common Chinese surnames into blocks of firm tofu, documenting their disintegration and decay. Her solo exhibition at 4A features a number of earlier works and a new commissioned project, ‘One Hundred Names for Kwong Wah Chong’. Together with curator Toby Chapman and the 4A team, Chen researched the history of the Chinese diaspora in Sydney, specifically focusing on the Haymarket precinct where the gallery is located. She found the names and stories of some of the earliest Chinese migrants, discovering that ‘Kwong Wah Chong’ was Sydney’s first Chinese-owned and operated business.
I spoke with Chen Qiulin at 4A, prior to the opening of the exhibition, to find out more about this intriguing connection between Sydney’s Chinatown and the inhabitants of Chongqing and Chengdu. To the sound of the trams passing outside, and with the smells of her installation of Chinese market aromas (think star anise, ginger, Sichuan pepper) wafting through the gallery, the artist explained why tofu is the perfect metaphor for contemporary China:
Luise Guest: I saw your earlier video work, ‘Garden’ and your reconstructed timber traditional house at the Asia Pacific Triennial in Brisbane in 2009, and I found them very sad and elegiac. With those earlier works, and again now, with ‘One Hundred Names’, you seem to focus on experiences of change, loss and displacement. To what extent do your own feelings about the disruption and dislocation experienced by Chinese citizens due to China’s rapid social change motivate you in making your work?
Chen Qiulin: I entered this field as an artist at a very early stage because I had experienced so many changes in my hometown, and generally in China, so that’s why I am so interested in this topic of change. It’s the starting point, as well as the reason, that I am consistently doing so many different things, exploring different practices. I focus a lot on individuals. My work extends to the micro level of individuals, not just cities, or the whole country, but individuals and how their lives change. And in this work I have used tofu because it is such a delicate, soft, fragile medium. It doesn’t last long. It’s a kind of symbol for society’s upheaval, and for China itself.
LG: I want to ask you about the process of decay and disintegration, how your carved tofu changes, rots, decays and then eventually disappears. Why is that significant?
CQ: The process of decay is slow but natural. It’s a symbol of China’s ancient culture and traditional values, things that once upon a time were praised and applauded by people, but now are really not valued and are being forgotten.
LG: Is this a source of some sadness for you, this loss of tradition, and increasingly the sense that everywhere is the same in this globalised world?
CQ: Yes, it makes me very sad.
LG: In the past your work has often been highly specific to your own experiences in Sichuan Province, and to the changes wrought on cities and towns by the Three Gorges Dam construction. This iteration of your ongoing ‘One Hundred Names’ project here at 4A is a little different, as it has such an interesting connection with Sydney, and the Chinese diaspora who first settled here in the 19th century. Do you see this as marking a change in your work, a new direction from your previous work?
CQ: I think my practice is constantly expanding throughout different cities and towns in China, and slowly, slowly it has spread to Sydney and Australia. It is expanding now to a global reach.
LG: Is your ongoing project ‘One Hundred Names’ very specifically Chinese or does it have a more universal significance? 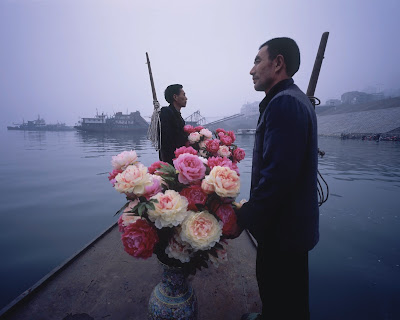 Chen Qiulin. The Garden No. 1, 2007; C-type print; 100 x 82 cm. Courtesy of the Artist and A Thousand Plateaus Art Space, Chengdu.
CQ: This new connection with 4A is majorly based on Sydney’s Chinese history and this specific location of Haymarket and Chinatown. I focused on specific individuals and interviewed some second and third generation residents who live in Sydney, and their feelings and opinions. The concept of ‘home’ kept coming up in those conversations. So there is a significance globally.
[After researching Sydney’s early Chinese residents, Chen Qiulin found inhabitants of Chengdu with the same surnames as people in Sydney. She asked them for their favourite tofu recipes, and filmed them cooking while they spoke about their family histories and the stories of the recipes, in their kitchens.]
LG: Through the device of the surnames, when you film people in Chengdu cooking and eating tofu, and telling the stories of their favourite recipes, you are creating a link, are you not, between people living in China and Chinese people living in Sydney?
CQ: I am interested to learn about new places, new cultures, new histories. So that is why I am here in Sydney working on this commission. The ‘One Hundred Names’ project might continue, and eventually go beyond Australia.
LG: I wondered if the development of this project made you see any commonalities between Chinese people living here in Australia and those people in Chengdu (with the same names) that you filmed cooking in their kitchens. What commonalities did you find?
CQ: I think that the boundaries and the concept of ‘hometown’ have been blurred, both inside and outside of China.
LG: Is this concept of ‘hometown’ core to Chinese people’s sense of identity?
CQ: Yes, but it is to do with the constant rapid change in China. People don’t really have a clear concept of home anymore because everyone is moving around and society has changed so rapidly. So maybe the word ‘hometown’ is more conceptual now, more than a real location, a real ‘home’. It’s not necessarily a physical place. Chen Qiulin. One Hundred Names for Kwong Wah Chong, 2015, installation view, image courtesy the artist, A Thousand Plateaus Art Space Chengdu, and 4A Centre for Contemporary Asian Art
LG: If you go back to your own hometown of Wanzhou now, how is it different from when you were a child?
CQ: Yes, it is very different. In my opinion it’s not only the appearance of the town that is different, but the people living there too. When I went back I felt such a strong disconnect between my memories and the reality.
LG: With ‘One Hundred Names’ obviously you are focused on Chinese history and culture, including food culture. But in your work generally you have a focus on the ‘Lao Bai Xing’, the ordinary people, common people who are caught up in the processes of globalisation. Why do you concentrate in your work on every-day, ordinary individual people, such as the workers in your new video project, or the porters in Chongqing in your earlier work, ‘Garden’?
CQ: Because they are the real China. They are how China and the Chinese people really are.
LG: We talked about the disruption and dislocation of change. But does the dramatic pace of change in China actually make it a very exciting place for an artist to work?
CQ: In the last three decades contemporary Chinese art just started. Over that thirty years it has developed so rapidly and has now reached an international audience. The exciting part might be that within China people are now beginning to accept all kinds of art as art – no longer just painting and drawing. So in China, people’s ideas about contemporary art are changing.
LG: You yourself trained as a printmaker at the Sichuan Fine Arts Institute, making woodblock prints in the traditional techniques. That’s a long way from the work you are doing now as a new media and installation artist. What do you think is the most significant change in your own work?
CQ: When I was studying at the art college, what I gained was just skills and techniques. Slowly I realised that I had to learn more about the world and come up with new ideas, and concepts, beyond just skills. That is why I want to learn more, and try new media. After I leave Sydney I will fly back to Chengdu and go to a ‘Dong’ minority village and collaborate with a contemporary dancer based in France to make a documentary.
[The Dong ethnic minority live primarily in the border regions between Guizhou, Hunan and Hubei Provinces.]
LG: So, no more tofu?
CQ: No!