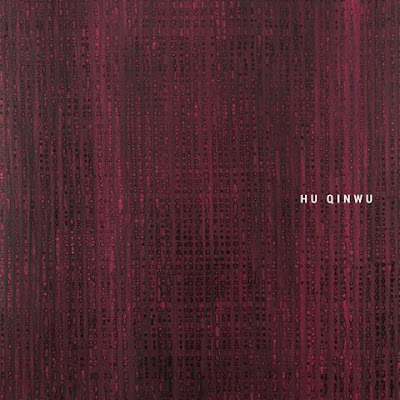 Earlier this year I wrote a catalogue essay for an exhibition of paintings by Hu Qinwu at Melbourne's Niagara Galleries. I have loved Hu's work since visiting his studio on my first trip to China at the start of 2011, my first encounter with this softly spoken and gentle artist. Here is the essay, in both English and Chinese versions, with thanks to Niagara Galleries, China Art Projects and my wonderful translator in Beijing, Xu Yining:
Can painting be a form of meditation, even of prayer? In the work of Beijing-based painter Hu Qinwu we find a cosmos teeming with energy, like constellations seen through a powerful telescope, or the unseen worlds beneath the ocean’s surface. Hu works in an idiom that seems at first glance to echo western modernist conventions of abstraction – fields of rich colour are activated with a grid of lines and marks that appear to shimmer and float across large canvases like echoes of Rothko, immersive and profoundly beautiful. Almost minimalist, they are stained in grey, gold, crimson, viridian or jade.

Unlike the mid-century American colour field and gestural abstractionists, however, Hu Qinwu’s abstraction emerges from a particularly Chinese art historical moment. The abstract painting that emerged at the end of the twentieth century in China is the antithesis of western minimalism; art historian Gao Minglu coined the term ‘Maximalism’ to define their particular character: anti-theatrical, consisting of both interior and exterior space, imbued with philosophical and spiritual notions of temporality, these works reflect the conceptual space within the artist. Inheriting this specifically Chinese history, every work in Hu Qinwu’s oeuvre is an expression of his Buddhist practice – slow, deliberate, reflective and spare. Not a mark is wasted; there is no excess. This is painting that has been pared back over time, stripped of all that is inessential, reduced to its essence.

For thirty years under Mao the only permissible style for Chinese painters was Soviet Socialist Realism. Painters were trained in Russian and French methods of academic realist painting, and even today figuration dominates. There is a growing interest in abstraction, however, and an acknowledgement that there is indeed a history of abstract painting in China. Throughout the twentieth century and into the twenty-first there have been reciprocal exchanges between Chinese and western modernist artists in relation to abstraction. A complex history of transnational discourse that defies easy codification, this has not been a one-way influence, or a kind of artworld colonialism. In post-war New York artists such as Rothko, Motherwell, Kline and Tobey were fascinated by ink painting and calligraphy, and by Zen Buddhist thought. In post-Mao China, a late twentieth century revival of ink painting took western abstraction as a visual language of line and mark and adapted it to a very different philosophical paradigm. To view Hu Qinwu’s paintings as an adaptation of high modernist ‘all-over’ painting would be to entirely miss the point. His practice is grounded in Buddhist philosophy, Chinese history, and his life in Beijing, far from his home town in Shandong Province. To understand his paintings as a form of prayer is closer to the artist’s intentions.

Hu Qinwu describes his careful layering of wash, stain and glaze as ‘a process of alternative confirmation and disavowal’ in which a repeated brushing away and re-drawing ultimately creates harmony. Lined up against the walls of his studio, his canvases seem to be texts that could be read if only you could decipher the script. Braille-like, these paintings are a coded language of dots, dashes and marks. Like Buddhist sutras, you imagine them chanted aloud. Acrylic works on paper are stacked on tables; deep red, cobalt or ultramarine pigment is layered over black, or sometimes reveals itself from underneath darker shades of aubergine and dark grey. The surface patterning of dots and marks is made by the artist’s practice of dropping water carefully and methodically onto the surface of the work. Sometimes Hu uses a soldering iron to burn holes into the surface, evoking natural processes of weathering and decay. In the past he has burned into the pages of Buddhist sutra books to obliterate certain characters on each page, rendering the text unreadable. To the artist, this is not a nihilist absence of meaning, but an action embedded in a Buddhist theology in which language is just one possible means of labelling and defining the world. In the ‘Buddhist Volume’ series a fine gold grid overlays Chinese characters partially revealed through a patterning of dots in darker and lighter washes of ink on heavy paper. They seem to shimmer and dissolve, disappearing and reappearing under the patterns of tiny repeated circular forms.

Trained in oil painting in his native Shandong Province, Hu Qinwu came to Beijing to pursue a Master’s Degree in Painting from the Central Academy of Fine Arts, graduating in 2008. Today, he lives and works in the capital, in a peaceful studio far from the city centre, and his practice extends from painting into photography, printmaking and sculpture. His immersion in the traditional practices of ink painting, his own personal history and the recent history of China have all had a profound impact on his work. ‘Chinese history and culture are in my blood’, he says. Austere, yet lyrical, his paintings convey tranquillity, as well as a determination to create order from the constant change and frenzied re-invention that characterises life in Beijing.

Works such as ‘Untitled 13006’ and ‘Untitled 13008’ (2013) feature veils of rich red pigment over darker underpainting. The characteristic grid of dots in these works makes them appear weightless, floating, suggesting the rhythmic pulsing of blood in the veins. In ‘Untitled 13021’ (2013) a myriad of dots and marks vibrate across rich grounds of black and grey, at once dramatic and subtle. Abstract and yet also not abstract, they are immersively meditative. On careful viewing these works reveal elaborate and sophisticated variations of colour, shape and texture; every mark and subtle transition of tone is carefully considered. There are no accidents here. The authoritative presence of Hu Qinwu’s large canvases are underpinned by his deep knowledge of ink painting.

The term ‘tian xia’ in Chinese literally translates as ‘under heaven’, but its meaning is far more complex. Rooted in Buddhist, Daoist and Confucian philosophies, it refers to the order of things, the wholeness of the universe, as well as to physical geography and the metaphysical realm of mortals. Far beyond the visible and physical world, ‘tian xia’ implies a cosmology covering earth, heaven and everything in between, including the social, psychological and political worlds. Archaeologists have discovered ancient Chinese artefacts, jade carvings, temple structures and sacrificial platforms which employ the square (‘cong’) and the circle (‘bi’) in a symbology of the cosmos. The archetype of round heavens above and square earth beneath also formed the ancient symmetrical axis of the design of Beijing. Scholars speculate that, as far back as the ancient Neolithic period, these abstract designs functioned as astronomic and magical instruments to create magical connections between human and supra-human worlds.

Now, in a time of doubt and chaos, this ancient cosmological symmetry is seductively appealing. In works such as ‘Untitled 15001’ (2015) the darker vertical lines and streaks of paint make up a grid that echoes the brutal concrete, glass and steel structures of hypermodernity, the edifices that have replaced the grey courtyard houses and lanes of old Beijing, surrounded by eight-lane ring-roads. Punctuated by the circular forms made by the slow, deliberately controlled dripping of water onto the wet surface of the canvas, these paintings also evoke rainfall, weathering and the cyclical process of the natural world. Hu Qinwu has been profoundly affected by the transformation of his society in the last twenty years, and the dramatic changes in China’s economic, cultural and political landscape. He turns inwards, he says, to find ‘a quiet, calm place’ in which he can reflect on true and enduring values amidst the turbulence of rapid social change.

The startlingly vivid turquoise surface of ‘Untitled 15002’ (2015) is interrupted by long vertical drips and dribbles that intersect with wave like chains of droplets, suggesting light on water. Hu Qinwu presents us with a paradox. Dropping water onto his canvases from above, he apparently opens himself to the vagaries of chance. At the same time, he controls the process as much as any painter of the literati creating fluid calligraphy with ink and brush. Mass and void, control and release, simplicity and complexity, light and dark, order and chaos – Hu Qinwu’s practice deals with apparent contradictions. Relying on the repetition of forms to create rhythmic harmonies, he creates works of great complexity with simple means. Yin and yang: the heavens above and the earth below.

Posted by An Art Teacher in China at 3:29 AM