Zhang Peili: China and the World

Preparing to write a piece for Daily Serving about the Zhang Peili exhibition at the Australian Centre on China in the World, at Canberra's Australian National University, I was thinking about the aspects of Chinese contemporary art that I find most compelling. In the end, I decided, it comes down to the sheer audacity of scale and ambition, the sense that nothing is impossible, even in a tightly controlled society. Chinese artists are adept at walking that tightrope, evading heavy-handed and clumsy attempts at censorship; they use metaphor in such clever and poetic ways. Even, as in the case of Zhang Peili, when they have been insistent on a desire to avoid narrative altogether.

Here, for example, is Zhang Peili's 'Elegant Semicircles', in ‘HARMONIOUS SOCIETY 天下無事’, curated by Jiang Jiehong as part of Asia Triennial Manchester 2014 (with a work by He An in the foreground. Six large, single-colour flags on mechanised flagpoles sweep the floor as they move from side-to-side, gathering dust throughout the exhibition. 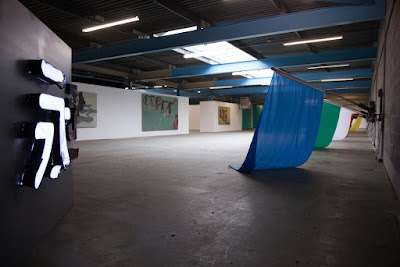 One of the things I thought about was the hugely significant role of new media and time based work in an artworld still dominated by painting - the impact of one man on that development is very significant. Zhang Peili was the founder of the New Media Department at Hangzhou's China Academy of Art, and he still teaches there - his pupils are now making waves internationally.

Writing for Daily Serving, I said:

''Sometimes—perhaps not often enough—viewing video art is a profoundly immersive experience of the kind that only a time-based medium can provide. Bill Viola describes this magic: “…it’s not an intellectual experience, it’s a physical experience. It’s coming at your body.” At other times, while peering at a small screen in a darkened gallery, the only possible response is an overwhelming ennui. Zhang Peili provides audiences with both these seemingly mutually exclusive states. In the 1980s and 1990s, he employed an aesthetic of deadpan banality, repeating nonsensical rituals that created intentional slippages of language and meaning. Although these and his recent video installations might frustrate a 21st-century audience grown overly reliant on spectacle, this glimpse of Zhang’s work over more than twenty-five years is satisfyingly thought-provoking and often surprisingly poetic.


'Zhang Peili: From Painting to Video' is curated around a work gifted to the Australian Centre on China in the World at ANU. In 2014, Zhang’s friend and fellow artist Lois Conner donated one of the artist’s final paintings, Flying Machine (1994). The exhibition of this newly restored work provided an opportunity to explore Zhang’s transition from painting to video, and to reflect on the development of new media art in China toward the end of the 20th century. The exhibition also presents eight of Zhang Peili’s pioneering video works dating from 1988 to 2012, starting with 30 x 30 (1988), generally considered to be the first video work in the history of contemporary Chinese art. 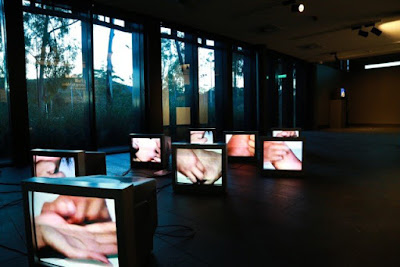 Zhang Peili. Uncertain Pleasures, 1996; six-channel video, twelve CRT monitors; 5:04. Courtesy of the Artist and Australian Centre on China in the World.
30 x 30 (1988) was later followed by Zhang’s experiments with performative, durational, and text-based installations. In the piece, Zhang films his own hands in surgical gloves, breaking a thirty-by-thirty-centimeter mirror, painstakingly gluing the shards together, and then breaking and gluing it again and again against the terrazzo-tiled floor of an empty office. The video was filmed over three hours (the longest VHS tape available at the time); Zhang’s intention was to lock viewers into the exhibition space for the entirety of the piece. This absurdist representation of a banal and incomprehensible action reflected the artist’s determination to avoid political imagery and easy narratives. He intended it to be excruciating to watch: After a series of fruitless meetings planning a retrospective of the avant-garde ’85 New Wave Movement that had surged across China in the mid-1980s, Zhang wanted to make a video that would be as boring and pointless as these meetings.

To read the rest of the article, click HERE
.

Posted by An Art Teacher in China at 4:28 AM