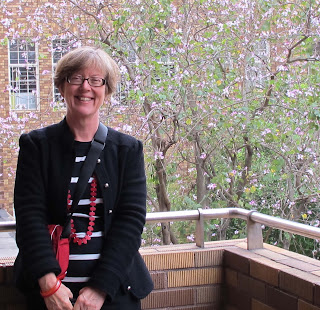 Here I am at the Maryknoll Convent School, after meeting Mr Yan Kwong-Yuen and watching his Form Three Phography class present their work.
I began today at the Australian International School, Hong Kong, in Kowloon Tong. Kowloon Tong is a suburb full of schools, kindergartens, coaching colleges and university campuses, including the fabulous looking building housing the Visual Arts and Design faculty of Baptist University. At the start and end of the school day the streets are filled with a visual cacophany of different school uniforms and an aural cacophany of children and teenagers, together with many school and local buses roaring down Waterloo Road.

AIS HK is a big K-12  school which caters for both local Hong Kong and expat families, and the class I observed this morning was no exception to this diversity. A lively and friendly group of  about eight Year 11 girls, some of whom are studying for the HSC and some for the IB, present something of a challenge for the class teacher to manage in one group.  They had been looking at works by a range of artists including Robert Rauschenberg and Nancy Spero, and were thoughtfully experimenting with a range of materials in order to find an interesting way to represent themselves in a self portrait which referenced their culture. 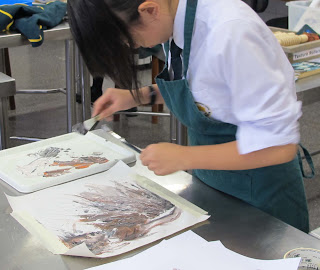 Year 11 Art student at AIS Hong Kong, photographed with permission of student and teacher
One student told me that she was trying to create the visual sensation of water on the surface of her canvas because she had just come back to Hong Kong after being at Ascham in Sydney, and she was missing the rowing! Many Loreto girls would understand this attachment! Others were writing Chinese characters with a hot glue gun or applying interesting textures to the surfaces they would later paint on. Concurrently with this painting/mixed media work, the students had also just had an after school session learning how to use photographic lighting to create mood and atmosphere, and were tasked with a portrait or self portrait project, presenting this combination of images as a 'body of work'. The IB students, especially, with their demanding task of developing and curating a series of works for exhibition over the 2 years of their course, typically work across many different forms and techniques. Storage of their developing works in a city where people typically live in small apartments is a challenge!

I had such an interesting morning, where discussions with the secondary Principal and teaching staff ranged across topics such as Australian university entrance requirements; the advantages and disadvantages of the IB vs the HSC; the advantages and disadvantages of student-owned laptops vs computer labs; themost effective use of ICT including Smartboards in Visual Arts and Design and Technology; and the challenges of teaching culturally diverse groups where many students are speaking English as their second or third language.

Their term is 12 weeks (so long! I well remember the days of the 13 and 14 week term in NSW) but the final week is 'Activities Week' where every form is involved in either Service Learning, Outdoor Learning (such as Outward Bound, similar to Duke of Edinburgh) or Cultural Learning. Some students are going diving to Koh Samui, some to an orphanage in India, some to help build houses in Cambodia, some to Vietnam. There was a group going skiing in Japan but for obvious and very tragic reasons this has been cancelled. So, my first impressions included this: there are so many things that our two schools have in common, lack of space being one of them! Another is the challenge of integrating technology in such a way that it does not entirely dominate teaching and learning, but which supports it in the most effective ways. The students I met in classes and in the corridors were very polite and obviously had warm, relaxed and yet respectful relationships with their teachers. The Visual Arts teacher and the Head of Design and Technology were incredibly generous with thier time and showed me all the areas of the secondary school, including the rooftop swimming pool with extraordinary views right across the city. I even went to a Year 8 Food Tech class in the beautiful new kitchen, where some very small and serious boys were making Duchess Potatoes, while other students worked at laptops and the teacher worked across two areas of the learning space. 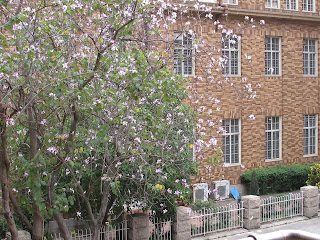 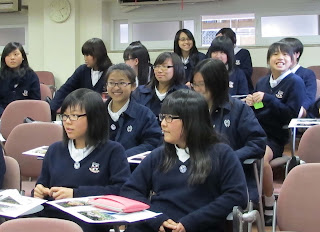 Students in Form Three at Maryknoll Convent School, photographed with the permission of the students and their teacher
I spent the afternoon with Mr Yan, the art teacher at the Maryknoll Convent School. His Form Three class of 40 girls were presenting their digital photographic projects, giving a short talk to the whole group while their images were projected from Mr Yan's laptop. The girls were lively, happy and irrepressible (just like Year 9 everywhere!) and there were some really thoughtful and lovely imagesin photographs presented which ranged from the very typical Year 9 fluffy kittens and pretty flowers through to interesting photographs of doorways in Yau Ma Tei and street signage, contrasts of old and new Kowloon, and interesting approaches to photographing shadows and reflections. Their presentations were in English although there was much lapsing into Cantonese and much giggling. They thought it was especially amusing that Mr Yan had been expecting his visitor to be a man, and was somewhat disconcerted as he had already prepared the students to greet 'Mr Guest' - and then I turned up!

We had a very interesting discussion about our two systems, and the ways that the final Form Six (matriculation) works are assessed by examiners in the Hong Kong education system. This includes an interview of the student by the examiner (much like the IB) and some interesting ways of moderating the marks given by teachers at the school level. This is controversial at times, (as any high stakes assessment process is likely to be anywhere in the world) and there is discussion about the consistency of standards and reliability of the processes applied to assessment judgements.

Tomorrow is my final day in Hong Kong before I fly to Beijing on Friday. I hope to go to a number of galleries and exhibitions as well as meet up with a local artist for my first 'artist interview'.
Posted by An Art Teacher in China at 6:41 AM