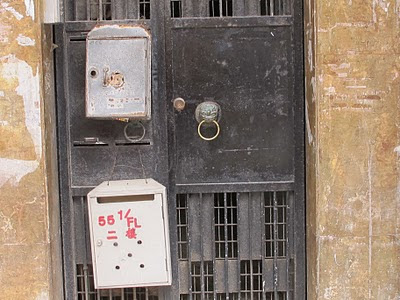 Today was a little slower and less intense than yesterday, which gave me a bit more time to soak up the ambience of this city, where (gulp!) I saw a fishmonger skinning live frogs around the corner from very swish art galleries and expensive handbag shops. Some impressions: tiny stooped old ladies pushing enormous barrows of goods up steep hills; glamorous and very well-groomed young girls with beautiful shoes, bags and overcoats walking in pairs; very young men in very sharp suits and rectangular designer glasses speaking in staccato tones into cell phones; groups of old men with gold teeth laughing together and playing mah jongg in the park; shopping malls of enormous glitz and glamour around the corner from street markets selling anything and everything including meat hanging from hooks under red lights. This is a city where everyone is busy and everyone seems to be selling something!

At the Osage Foundation Gallery in Chelsea I had a conversation with Joyce Lau, who trained in art criticism at St Martins in London before coming home to work in Hong Kong. Highly articulate and passionate about contemporary art, she told me that things are difficult for younger artists in Hong Kong as the commercial galleries are focused on art from the mainland and there are few artist-run spaces for them to exhibit their work. In this highly compressed city where space is at a premium and rents have continued to rise, artists who had rented cheap industrial spaces in Fo Tan are continuing to be pushed further and further away, and some have no studio space to work at all.With many people arriving from the mainland every day there is intense pressure on jobs and rental property. In the galleries arounnd Central today I saw a lot of very interesting work, both traditional and contemporary, all of which came from Mainland China, Korea or Japan.

The main event today was the first of my artist interviews, with young Hong Kong artist Hanison (Hok Shing) Lau. We met in a cafe in Mong Kok, as Hanison was between classes - he teaches Sculpture and Art History at Hong Kong Art School. After studying in Hong Kong he completed his BA and MFA atSwinburne and RMIT in Melbourne, and confesses that although he loves Hong Kong he sometimes misses the quieter pace of life in Melbourne. I don't share with him the famous Ava Gardner quote, that Melbourne was a great place to make a film about the end of the world, as I am not sure that he will understand me.
Hanison shows me images from the last eight or so years of his sculpture and installation works. They are very beautiful, meditative and quiet works which employ found objects and 'poor' materials (in the sense of art povera) in sensitive and unexpected ways: cardboard packing boxes are glued together and carved to form mountains reminiscent of classical Chinese paintings, or paper towels are designed to form lakes and waves. He references traditional Chinese culture and poetry from the Song Dynasty, as he believes that young Chinese need to reconnect with these traditions. He also wants people to take the time to really look at the world around them and the objects they are using - in a busy busy city where people buy a new cell phone then throw it away and buy a new one in order to have 'the newest, the latest' consumer goods, Hanison wants his audience to think more carefully about tradition and the meanings inherent in objects. Year 12 Loreto students: note the continuing connections with Marcel Duchamp and the ready-made! Told you it was still important!

Many of his works also have a sly humour - his 'Letter to Marco Polo', which includes a pair of boots made of teabags sewn together. They appear like the Chinese leather armour worn  by the entombed warriors (and he says were surprisingly difficult and frustrating to sew!) and of course are a reference to Marco Polo infamously neglecting to mention tea in his accounts of his travels, which have caused some to believe that his tales were all fabricated fantasy. I especially loved his 'Table Top Gardens' which are tiny traditional gardens like those of the Ming Dynasty, with tiny carved cardbaord mountains, real plants and fish, which he 'adopted' out to a dozen people (including his mother, a traditional landscape painter). The 'adopters' had to look after their gardens and take a photograph every day, which were then exhibited with the works as a large installation.

I also loved his 'walking shop', a cardboard person-sized replica of a traditional Hong Kong shop, in which he walked around the city engaging people in conversation and exchanging or trading items with them. He said that old people like newspaper, because they can sell it, so he collected lots of that and gave it away, and young people like stationery, so he exchanged that for whatever people offered to give him in return - the goods he received included used Starbucks coffee cups, but also some money. The performance piece was documented and photographed, and the items he received and the conversations he had with the audience participants all then became part of the artwork. Perhaps this development of his practice from more purely sculptural to performative comes in part from his experience as a performer in the Chinese opera, from the time he was a small child up until he left Hong Kong to study in Australia. I suspect that his expressive face and ability to tell a story and engage me in the narrative of his works may come from this part of his personal history as well.

I think students in Australia would love his work and find it accessible, interesting and engaging, as well as thought provoking. Some aspects reminded me of Hossein Valamenash, the Iranian born Australian artist, whilst some of his deliberate choices of 'poor', recycled non-art materials, which are transformed through the alchemy of his artmaking, reminded me of Sarah Sze, a New York Chinese artist whose work I saw last year.Hanison has already experienced one overseas artistic residency, in Portland Oregon, and later this year he has been commissioned to create some works in Paris and London. He will also be going to a residency in Korea. Whilst he, like many others I have spoken to, talked about how hard it is for Hong Kong artists beacuse no-one is interested, and all the focus of the artworld is on the mainland, I think he is definitely a young artist to watch.

And, oh yes, the 2 bowls of soup were eaten on the run in food courts where so many options have lungs, intestines, feet or things which are, frankly and perhaps fortunately, unidentifiable, in them that I have been eating vegetarian soup with noodles - when in doubt, pointing at things and using sign language!
Posted by An Art Teacher in China at 6:29 AM