Hong Kong - and an exhibition by 6 women artists 'Full Bloom'

My first day in Hong Kong - and after what felt like thousands of miles of walking, I saw a very interesting exhibition at the 'Contemporary by Angela Li' Gallery, 'Full Bloom', a curated show (selected by Fang Lei, a curator from Shanghai) of 6 female Chinese artists. Works on paper, very delicate and very beautiful, with many references to Chinese traditions. In her catalogue essay Fang Lei says, "Full Bloom is not about artifacts made by women, nor about your best female friend. It is a departure from the previous usual colourful scenes, but it is a rosy make-up, dyeing with flowers, tracing butterflies, telling of desires. It floats with shadow in rainbow colours and comes with conscious confidence........contemporary ink paintings cannot be interpreted in the same way as traditional ink paintings. Just as the understanding for contemporary art is changing, the boundaries of the viewers and the artists are no longer crystal clear". While perhaps these words themselves are not quite 'crystal clear', the exhibition has some interesting resonances, which I thought about as I discussed the show with Joanna, from the gallery, who had just returned to Hong Kong from Art Miami and from New York.

Is there a trend for younger Chinese artists to re-evaluate influences from Western modernist and contemporary art, and return to a more overtly 'Chinese' practice? Is this indicative of conservatism? National pride? A reaction, maybe, against the crazy years of the art 'bubble' when many of the generation of the 1980s and 1990s  embraced conceptual art, and created works which owed a debt to Duchamp, the Pop artists and Beuys? Or is this in fact an understandable reaction by women artists (none of whom are from Beijing) against what has often seemed to an outside observer  a very 'macho' art world in China? So many rhetorical questions, with so few answers - as yet!

Barbara Pollack's, 'The Wild, Wild East: an American art critic's adventures in China', which is full of fascinating, if often badly written, artworld gossip, certainly makes the Chinese artworld appear to be almost entirely fuelled by testosterone! I enjoyed her anecdote about Ai Weiwei, in the USA for the Art Basel Miami Beach Art Fair, stripping down to his boxer shorts beside the hotel pool in Miami, and generally behaving outrageously. She says, "I kept my clothes on...tolerating this bad boy behaviour as  a throw back to the days when male artists thought they ruled the world."

The show at Angela Li runs very much counter to these 'lions' of the artworld and their antics. The works here are quiet and restrained, at first sight fairly conservative, even 'safe', but certainly they repay a closer look. In particular, works on brown paper by Li Wenmin, who lives in Sydney now and teaches at COFA, such as 'Little Bird Nest', are very beautiful: spare, but with some quirky images and a beautiful sense of space. They suggest great confidence in their restraint and simplicity. They also evoke scrolls and traditional ink painting or calligraphy, without being in any way traditional. 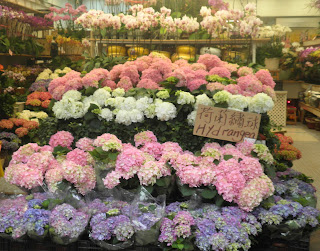 My photograph from 'FlowerMarket Street this morning seemed appropriate!
A Chinese show on CCTV4 found in random exhausted channel hopping last night provided a link with some of the thoughts I had as I looked at this exhibition: Feng Yuan, the Deputy Director of the 'Chinese Arts and Literacy Foundation' said that in the 1980s and 1990s Chinese artists had been' too influenced by Western art', but had continued to work innovatively and with increasing confidence, so that from now on they would be leaders, and 'never again followers'. Whatever one may make of these sentiments, it is possible that they do indeed express a kind of  'zeitgeist'. Something I hope to further explore in Beijing next week....
Posted by An Art Teacher in China at 5:52 AM