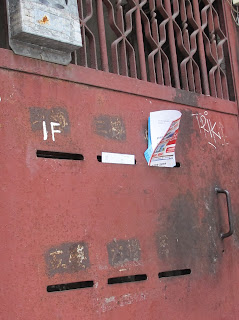 I arrived in Beijing this afternoon to find the city shrouded in thick dust – according to Stanley, my driver and translator, the spring sandstorms have arrived in this city of 23 million people. The journey from the futuristic and fabulous international airport, to this hotel on Beilishilu where I have a view from my window across the second ring road to one of the old hutongs of courtyard houses that I have been reading about, gave me a sense of how different a city this is. Hundreds of bicycles are parked everywhere, and cars are also parked in all directions across the footpaths. The thing that initially really astonished me was the street electrical wiring, which appears completely chaotic and possibly lethal, looping in enormous bundles across trees and shopfronts, sagging to the ground in some places and hanging dangerously close to the heads of people walking below.
So far I have ventured out of the hotel just far enough to wander through a department store and brave buying bottled water (and chocolate) at a supermarket. The extent of my communication in Chinese with people thus far is to say “Excuse me”, ‘Sorry”, “I don’t understand”, “I’m Australian” and “How much is it?” I find that I can understand small parts of what people are saying, and am fascinated by the Beijing accent with its rolled ‘r’ sounds, but really I am virtually silenced and forced to use ridiculous sign language.
The young guide / translator who will help me to communicate with artists and galleries is named ‘Li Ting’ – when I asked him how Li Ting became Stanley he said ‘Stanley Kubrick’. He is somewhat phlegmatic and perhaps not one of life’s enthusiasts. His response to most of the questions I asked him, such as ‘Were you in Beijing for the Olympics, and how was it?’ is ‘Quite Good’. In our ride from the airport I discovered that the Temple of Heaven, the Great Wall, the National Museum and the Peking Opera are all ‘quite good’.
What is NOT ‘quite good’, however, is that I have found to my frustration and annoyance that I cannot access this blog here. So I am continuing to write, and emailing it in instalments so that my wonderful family can (I hope) copy my blog posts and photographs. However unless I can work out some way around this I won’t be able to see any responses or have any idea whether anyone is reading it for the next three weeks.  It will feel a bit like sending a message in a bottle!
Tomorrow: meeting Tony Scott from the China Art Project, and visiting some artists in their studios, and some galleries.
Posted by An Art Teacher in China at 2:28 AM