The April Fool joke today was on me, I fear, as my translator Savana somehow persuaded me to try both 'stinky tofu' and hundred day old egg. Let's just say it's not something I intend to do twice! I had perhaps become a little over confident after we had been to tiny shopfront restaurants with a handful of tables and eaten delicious dumplings and seaweed soup. We then proceeded to another tiny restaurant, decorated with large portraits of Mao, and red lanterns, which had a menu that included snake, donkey, a variety of intestines and other internal organs, and (sadly) dog. I was opting for the vegetarian options, needless to say, which were all delicious apart from the aforementioned tofu and egg.

I started the day interviewing Chen Hangfeng in his Weihai Road studio, an artist community at 696 Weihai and Shanxi Lu which has so far successfully resisted being torn down. Once upon a time opium storage facilities, this mass of buildings now houses more than 40 artist studios and small galleries. He tells me, however, that he fears they will have at the most 2 more months in this location. Chen Hangfeng is an installation and new media artist who works mostly in Shanghai but has just returned from a residency in Sapporo, Japan. In fact he was in Japan during the earthquake, and ran from his studio into the street when the building began to shake. He told me the Japanese were so impressively calm and stoic in response to the terrible crisis that engulfed them, unlike the Chinese, he said, with their ridiculous panic buying of salt.

His practice is a most interesting one, and I had previously only been aware of one aspect, having seen some of his 'paper cut' works from a series called 'Logomania' some of which are in the White Rabbit collection in Sydney. A consistent thread running through his practice is the use of found and discarded materials. Not as a self-conscious art reference to Duchamp, dada or Arte Povera, but as a very deliberate statement about over consumption, materialism, greed and the culture of desire that we all live in, and are implicated in, both Western and non-Western alike. I ask him whether he would define his work as political, and his reply is an emphatic 'Yes'. From his first body of work, 'Logomania', created after he gave up working as a graphic designer, he has been conscious of the way that our world is ruled by a few extremely powerful global corporations. His work is thoughtful and makes the viewer think, in turn.

In a piece made for a brief artist residency in Luxembourg, he created a performance/video work called 'You can get them', inspired by the fact that everything in the supermarket was 'made in China' but of course selling at a price far greater than it would cost in China. His work, both funny and poignant, resembles the traditional, multi armed statues of Goddess of Mercy, or Bodhisattva, Guan Yin but in each of the hands (Chen and friends providing the arms) is an item from the supermarket, an assortment of plastic objects ranging from toy guns to fly swatters and coathangers. Chen tells me that he was also inspired in this work by the 'cheesy' over the top TV extravaganzas on CCTV for Chinese New Year celebrations, which include vast, elaborately staged song and dance numbers. He also wanted to make a more subtle point, about the working conditions and wages of those who make these common everyday objects, and a point about the way China is perceived in the west as a source of cheap labour and a market for raw materials.

He is articulate, thoughtful and interesting on a range of subjects, from the ways in which the Shanghai art scene differs from Beijing, to the ways in which Chinese contemporary artists incorporate Chinese ancient traditions and imagery (such as his paper cutting) to the inadequacies of art education, to his interest in science and history.

His daily practice, he tells me, is one in which he can work anywhere. He writes down ideas in a notebook while on a bus, or in the subway, and they can come from either the conceptual emphasis or from an idea about materials and format. The difficult part is in marrying these two together. Although as a teenager and a young man he was more interested in Western culture (books, art and music) than in Chinese culture, recently he has been revisiting the art of calligraphy and has studied the traditional manual of the 'Mustard Seed Garden'. His work, 'Wind from West' is a response to this ancient and scholarly form, transformed with his choice of materials - plastic shopping bags. "I chose sample drawings of the plum blossoms, orchids, bamboos and chrysanthemums -- four plants which are known as "the four gentlemen". The ancients used ink, but I used plastic shopping bags. I cut out the forms and then mounted them on a wood board with stick pins, to produce a collaged version of the four gentlemen -- a bad copy of the original. The side of the work is mounted with a series of mini fans, which create an awkward mechanical whirr which causes the plastic leaves of the plants to rustle, but when the fans are stopped by the timer, the leaves return almost to their original position." His intention with this work was to create a metaphor for the fact that the essence of Chinese tradition is still there but is hard to find, or is now viewed only in very superficial ways in this 'new China'.

This studio visit was followed by lunch with Monika Lin, who moved to Shanghai from the USA a few years ago and works here as an artist, teacher and researcher. Her work is exhibited across the United States and Europe and recently at Art Beijing, the Bridge Art Fair in London, Scope Miami, and the Arizona State University Art Museum.  She is represented by galleries in New York, San Francisco, Chicago, Kansas City, and Shanghai.

The focus of our discussion was her controversial research into women artists in China, and the impact (negligible, it would appear) of feminism. She began with the famous question asked all those years ago in 1972 by Linda Nochlin, who asked 'Where are all the great women artists?' Monika began to ask 'Where are all the Chinese women artists?' One answer to this was suggested when she asked a male photographer friend 'Where are all the Chinese women photographers?' In response he handed her his camera and patronisingly said 'Don't you find this heavy?' He was a bit stumped when she said, 'No heavier than a baby!' She interviewed a large number of female artists for her research and asked them all 'What female artists do you admire?' Every single one of them responded 'None'. This is quite depressing!

She herself created a work for a curated show about the difference between the number of rapes reported through official channels in China each day (87) versus the more likely reality that it is at least 10 times as many (870) with an installation of 87 porcelain waterlilies, referencing also the symbolism of the 'lotus feet' of traditional foot binding, and the 'flower house' or Shanghai brothel. Unsurprisingly, this work and the exhibition as a whole did not find favour with the authorities.  Another recent installation uses the metaphor of the jellyfish in exploring the way that expats in Shanghai see the Chinese as 'the other' - she has overheard and recorded many little comments and snippets of conversation that indicated a casual racism in expat attitudes which ranged from contempt to bewilderment.

Monika feels that the art scene in Shanghai, despite being as testosterone-fuelled and male-dominated as that in Beijing, has always been at the forefront of any new art movement, from the days of the Abstract Expressionist painters (who were politically crushed as subversives) in the 1980s through till today, where she thinks there is a concern for criticality and curatorship that is lacking in Beijing.

I followed this up with a visit to the Shanghai Museum so that I could look at some Song Dynasty painting to see the original source material which is referenced by so many of the contemporary artists that I have met recently.

Later in the day I visited the 'Couple Show' at the Shanghai Art Gallery at 3 on the Bund, an exhibition of works by 12 pairs of artists, 'royal couples' of the artworld. The premise of the show (to 'expose the dynamics of the personal relationship' and to 'probe the many levels of man/woman relationships') was perhaps more interesting than the work itself, which ranged from the obvious (Wu ShanZhuan and Inga Svala Thorsdottir standing nude in the produce section of the supermarket as an appropriation of Albrecht Durer's 'Adam and Eve') to the frankly bewildering. The one exception was a quite beautiful and haunting work where the voices of the male and female artist emanated from two old  radios on either side of the room, rising and falling, meshing and separating, creating a counterpoint in which the male voice was recounting his disturbing dreams and the female her insomnia. An interesting metaphor, and far more subtle than most of the other works in this show.

A very full day, and a fascinating one, but perhaps not a good idea to end it with 'stinky tofu'! 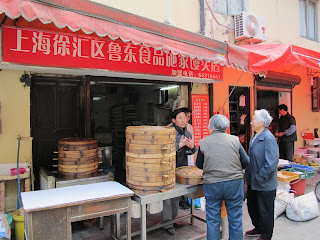 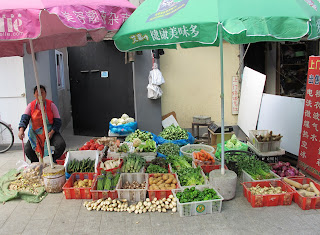