Past and present, power and politics - heat and humidity! 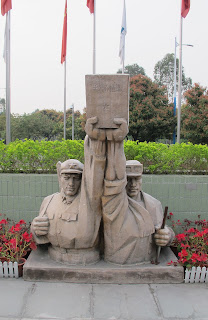 Guangzhou Art Museum Sculpture Garden
It feels good to be back in Hong Kong, and coming towards the end of this adventure - although I am regretful as well, as this has been quite extraordinary. There have not been enough hours in every day to do all the things I wanted to do, and meet all the people that I wanted to meet. But when I think about the last 4 weeks, I have done a lot! It's interesting also to realise that now I can access Facebook, and this blog, and I am inundated with news about the detention of Ai Weiwei. Watching CNN News on TV in Shanghai the other day, the announcer said, 'Fears are growing for Chinese artist Ai Weiwei.......' then the screen went black and transmission was cut.

Hong Kong is hot and humid, and seems so ordered in comparison to the mainland - people actually stop at red lights! And don't push and shove to get on the train before people can get off! And no-one is spitting in the street! Funny how you get used so quickly to things that seem extraordinary at first. I have been musing over how to make sense of all my experiences in some coherent form, and I think the key is the idea that has been expressed to me by so many artists in China - the layering of past and present. This idea is inescapable in China, as you are always aware of the weight of 5000 years of history, and the recent (often unspoken) past as well. And the present spins into the future so fast that who could keep up? I think this is the issue with the schools I have visited as well - both local and international schools are also dealing with the pace of change, and the questions raised about pedagogy,  technology, culture and how to equip students to live in this world. 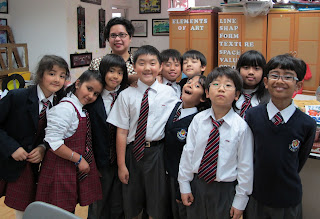 4th Grade students at Guangzhou Nanhu International School
At Guangzhou Nanhu International School yesterday I watched classes of 3rd and 4th grade students work happily and independently on sculptural and painting projects with their dedicated and enthusiastic teacher. These small people, from so many different cultural backgrounds, and their families who have moved to Guangdong Province for work opportunties from all over the globe, represented to me the face of 21st century schooling. This school was the most multicultural I have seen in China, a country which is essentially very monocultural. Schools such as this are consciously and thoughtfully preparing  students to enter a fluid and changing world, and even the cultural and ethnic mix of the classrooms and the teachers are part of this preparation. We need to ask ourselves some big questions in Australia, I think, about how schools can meet the needs of students, families and societies for the future, without repeating some of the same old mistakes (for example, a naive faith in the power of testing alone to miraculously improve results!)

In 'Factory Girls' Leslie T Chang observes the new 'commercial' and 'self improvement' colleges attended by migrant workers in factory towns like Dongguan, "Dongguan learning took place in humble settings. Classrooms were bare and dim and plagued by power cuts, and computers so grimy and ancient they looked like archaological finds...Almost none of the instructors had a proper degree; many, like Teacher Deng, trailed a string of failed businesses behind them. But for all that, they were revolutionary." She compares the ruthless testing and competition, the authoritarianism, and the conservative and limited curriculum of the Chinese school system, with its traditional emphasis on rote learning and writing (the corner stone of traditional scholarship) with these often dodgy and makeshift, but vital schools which essentially teach people how to transform themeselves and become someone new. "As I sat through a semester of White-Collar classes I realised I was witnessing a secret revolution in Chinese education. The rejects of the traditional school system were given a second chance. The factory floor of the world was also in the business of molding people. These classes had no grades and no tests and that was as it should be. The test was the world outside the classroom; the test was life." If nothing else, being in China has made me think about the nature of the education we provide for a generation who will grow up to enter a world that is nothing like the one we currently inhabit. The pace of change in Australia may not be as fast as that of China, but it will increase and it takes a particular kind of resilience to cope and even to flourish.

One of my translators was a young woman in her thirties who feels old  because she is not yet married. She grew up in a Xian work unit with parents who had been denied an education due to the Cultural Revolution, left school,  became a welder in the same factory, but  became convinced that education was the key to a better life, a life unlike that of her parents. She supported her own studies in a local college for eight years, all the while working in the factory, majoring in English. She wants to be an interpreter, but most of the time she works as a tour guide. However she has transformed her own life, and has travelled to the United States and Australia on her own.

This is a woman whose grandmother had bound feet. What a novel could be written about the three generations of her family.

I find that kind of personal courage and determination so admirable, and I saw the same qualities in many of the artists and the teachers that I met over the course of the last month. She told me a saying from her home town: "A woman should have long hair but short vision" - summing up the traditional Chinese attitude to the place of women in the world! 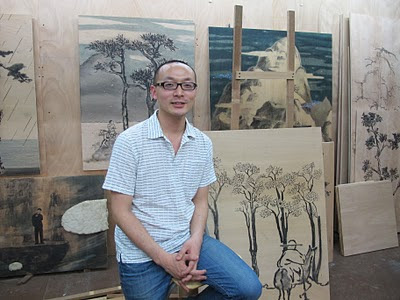 Tung-Pang Lam in his Fo Tan studio
I spent an interesting couple of hours in the Fo Tan studio of Tung-Pang Lam this afternoon, an artist who like so many others combines his training in the traditional techniques of calligraphy and ink painting with a contemporary and conceptual idiom. His studio is on the 6th floor of one of the old industrial buildings found in suburbs like Fo Tan and Aberdeen which are now used for storage and artists' and designers' studios, as essentially all manufacturing and heavy industry has moved over the border. Through the window are views of the mountainside, high rise apartments, and industrial buildings pressing in close together.  His young assistant, a first year student from his class at the Chinese University, is painting a large canvas with gesso. Other canvases are stacked in piles around the walls. Shelves are sagging with the weight of Chinese and Western art books, as befits this scholarly artist's practice.

Tung-Pang usually works on large sheets of plywood, using images taken from Tang, Yuen and Qing dynasty paintings, but applying them as stencilled images, working with charcoal and acrylic, or sometimes attaching tiny plastic model figures and trees like those from a boyhood model train set. In studying for a Masters Degree at St Martins College in London, he began to ask the question, 'What shaped the way I see the world?', and turned to the Chinese literati painters, scholars who retreated from the world.

A quiet, gentle and thoughtful character, he tells me he is interested in the work of artists such as Sigmar Polke, the Belgian Michael Borremans, and also a Chinese painter, San Yu, who lived and worked in Paris in the early twentieth century.  He loves the tiny background landscapes found in medieval and early Renaissance paintings, and shows me a book of Italian frescos by Giotto and Piero della Francesca, which he sees as quite similar to  the tiny details of traditional Chinese landscape painting.  He wrily comments that in Hong Kong his work is defined as western painting, but in London he was defined as a Chinese painter. This confusion of identities is troubling, and is something he continues to focus on in his work. Lam feels that western painting is like opening a window in order to look out, but Chinese painting is like opening a space inside oneself to escape from the outside world. "I want to be in Fo Tan and face the mountain, but at the same time I have to face the issues in the world" he says. One of those issues is the freedom of artists to work without constraints - the topic of Ai Weiwei is on everyone's mind this week.

Another Chinese saying: "All crows are black". Loosely translated this is a pessimistic view of humanity and suggests that nobody is to be trusted. Tung-Pang has produced a conceptual work called 'Where is the White Crow?'. This consists of 365 small square canvases with a different black crow painted in a calligraphic manner on each one, one completed each day for a year. In itself this practice is akin to meditation. As he translates the saying for me "There are no good guys". Except, of course, there are, and it is my good fortune to have met so many of them in the last month. 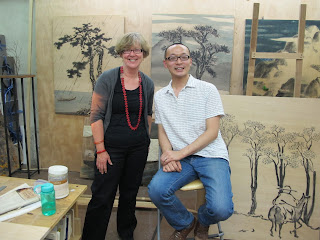 Posted by An Art Teacher in China at 8:02 AM