From Beijing to Shanghai: Demolition of the Mind, Art in a Time of Change

More of my China lists:

Three things I have chosen not to select from Chinese menus: 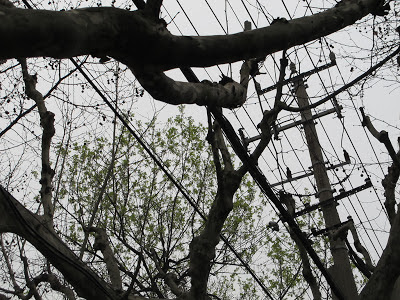 I’m listening to the cacophony of honking horns that is the Shanghai rush hour outside my hotel window. It’s a whole different world than the construction noise mixed with the shouted conversations of the migrant workers that I have become used to in the Dashanzi district of Beijing. I’m a little daunted by the challenge of navigating Shanghai, but excited by the prospect of seeing some interesting exhibitions and meeting more artists.

What is it about Chinese cities?  I seem to completely and utterly lose my bearings and all sense of physical direction and geography when I arrive in China. It took me a whole week to have any confidence in directing taxi drivers and knowing where they should actually stop in Beijing. I walked around the streets near my hotel this afternoon in a vain attempt to feel that I knew where I was on a map of Shanghai, struck once again by how very different the two cities are.  It’s warmer here, and there are still a few leaves on the trees. Women wear more make-up and often have permed hair, which seems weird to me after the plainer styles of Beijing.I have seen young girls wearing tutus over their jeans, with a padded jacket and platform Nikes completing the ensemble, often worn with leopard print fake fur ear muffs.  I discovered an entire shopping mall – and I mean 4 floors of many, many tiny shops  - entirely devoted to the sale of ‘cashmere’ jumpers and cardigans, mostly luridly sequined and bejewelled.

Yesterday I was in the far suburbs of Beijing, where factory chimneys belch alarming clouds of smoke amidst new suburbs of apartments stretching to the far horizon, meeting two young emerging women artists, Dong Yuan and Gao Rong. These two artists know of each other but have never met. Coincidentally, however, each artist makes work which is a memorial to a China that is fast vanishing with every new demolition, with every development ‘opportunity’.

Having spent the last week traipsing through Beijing’s galleries and museums, braving the bitter winds of northern China blowing down every street and alleyway , trying to see as many exhibitions as possible, and visiting the studios of 10 different artists, there are a few irresistible conclusions to be drawn:


For me the most exciting thing is still the way in which Chinese artists can invent and reinvent visual language in order to reflect on the dramatic – often alarming – changes in their contemporary world. Painter Jin Sha told me that just as the word ‘demolition’ represents Beijing, so too is there a demolition of the mind, in which old values, traditions, beliefs and customs are crushed, and there are big questions about what will emerge to take their place. His response to this is to develop a ‘contemporary gongbi’ style in which images by Renaissance masters such as da Vinci, Van Eyck or Piero della Francesca are borrowed and inverted, becoming a commentary on contemporary China in all its confusion and chaos. He sees parallels between the exactitude and mastery of technique in the Italian Renaissance and the same spirit which activated the Gongbi masters of the Song and Tang dynasties.

Other artists respond differently to the same social scenarios. When the house in Inner Mongolia belonging to the maternal grandmother of Gao Rong was demolished after her death, the artist decided to recreate it, exactly, to scale. However instead of bricks, mud and straw her materials are fabric, kapok and embroidery thread. Her lovingly detailed replica of the house, complete with its ‘kang’, the raised bed warmed by heated bricks on which the family would sit in the winter, the stacked quilts, the flowered thermos flasks and ancestor portraits hanging next to a dog-eared calendar, is entirely created with embroidery. To make the work she enlisted the assistance of relatives to collect photographs, recorded their memories, visited similar houses, collected doorways and furniture as close as possible to the remembered house. Her mother worked with her on this project, and Gao says that despite their quarrels it was a very important emotional experience which became a memorial to childhood, family and a lost way of life as well as a homage to her grandmother.

Trained as a sculptor in the Central Academy of Fine Arts in Beijing, she says she was a rebel, a ‘bad student’, who questioned the orthodoxy of sculptural practice until she discovered that other rebellious ‘bad girl of art’, Tracey Emin, and realised that she could use the embroidery skills learned from her mother and grandmother to create large scale sculptural works. Initially smaller in scale – telephones, a Beijing bus stop, they grew to become much larger – the entry way to the rented Beijing apartment she lived in as a student – and culminated with the immersive installation of her grandmother’s house seen at the 18th Biennale of Sydney.

The bus stop work represents the three different bus journeys across Beijing that Gao Rong had to take to get to the Central Academy as a student,  just as the Entryway to the basement apartment represents her rented student accommodation and the precarious life of the art student. The works are a record of her life's journey.


Her current project, to be shown in New York next year, is a tongue in cheek and wicked satire of Chinese brand obsession and materialism – fake designer label handbags embroidered with stains, spilled instant noodles, and with sculptural embroidered objects inside each bag representing their fashion conscious owners. Her intention, she says, is to ‘reinvent’ embroidery, removing it from the realms of the ‘nu hong’ style of ‘ladies needlework’ to become something much edgier and more conceptual.

Another young emerging artist, Dong Yuan, is also reflecting on demolition and the nature of social change in China . Her grandparents’ house in Dalian, where she spent most of her childhood, is the focus of her latest work. A painter who has previously created witty and engaging installations representing her life’s journey thus far through a series of tiny rented Beijing apartments, Dong Yuan works slowly and meticulously, looking back to the Renaissance painters who have inspired her since she was a schoolgirl. On separate canvases she paints every single object and possession in each room of these living spaces, down to clothes hanging from hooks and an umbrella spilling drops of water onto the floor, each water drop painstakingly represented on a separate canvas. They are a record, a memory, a way of fixing something fragile and ephemeral. Working out of a small rented apartment on the far outskirts of Beijing, she says that she works so slowly that it is difficult to maintain a presence in the gallery system. The grandmother’s house project alone already consists of 400 paintings and she has only completed two of the four rooms.


Both these artists may be said to reflect on a specifically female experience of family and domestic life, working in quiet and ‘unflashy’ ways which are at once beautiful, witty and surprising.
Posted by An Art Teacher in China at 4:20 AM