Shanghai: Shi Zhiying and a lightness of being 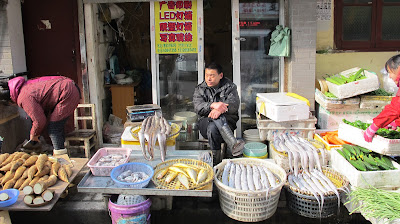 There is a lightness here that is different from Beijing, which can be a heavy and ponderous place with its weight of imperial history and the sense of political power and control. Shanghai in contrast looks like a city designed by the Jetsons which has been dropped on the chaos and muddle of urban China - all futurama flyovers and curving freeways, but with old men cycling, carrying loads of firewood or recycled cardboard amongst the trucks, and impromptu markets set up on corners and in underpasses. I saw one today that was selling a dozen motorcycle helmets, packets of Zhonghua cigarettes, and a range of i-phone covers arranged on a blanket beside the road.

More of my China lists - the frivolous and the not so frivolous:

Three  differences between Shanghai and Beijing:

Shanghai taxi drivers are even crazier than those in Beijing, driving across and between lanes, taking blind corners at tremendous speed, frequently on the wrong side of the road, and narrowly missing cyclists, pedestrians, tricycles carrying loads of firewood or cardboard, and other cars at every intersection, leaning cheerfully on the horn. They sometimes ask me if they can borrow my glasses to read the addresses I have had written in Chinese characters, and continue driving, turned around to face me and wearing my multifocal lenses. Hilarious and terrifying! 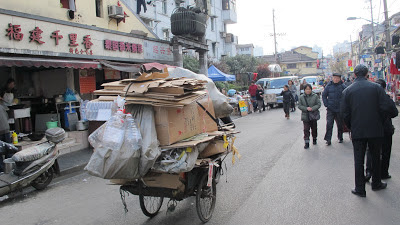 Shanghai is draped and festooned with laundry, it is like a festival of underwear and flowered quilts and padded jackets hanging on racks, on lines strung between poles, on electricity wires. You navigate streets and lanes between the big underpants and colourful babies clothes. Old women play cards and mahjong on corners, usually with a crowd of men watching them, gesticulating and voicing loud opinions 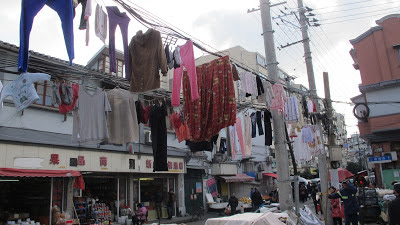 Also, older ladies in Shanghai wear their pyjamas in the street - some padded and quilted,as seen in the photograph below, some fleecy and extremely pink. My young translator said, "Young people think this is so embarrassing, but they won't stop!" 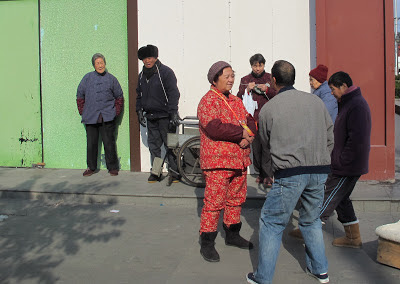 Since arriving here I have visited the artist Shi Zhiying in her studio to hear about what she has been doing since we met last year. Her large works continue her series of investigations of Zen gardens, lawns in which she paints every blade of grass, and vast oceans. She showed me her new works, a series of small canvases representing Buddhist reliquaries, beautiful and simple in her characteristic technique of thinned down, scraped back oil paint.

She has also exhibited a series of ink paintings based on Italo Calvino's 'Mr Palomar'. Ignoramus that I am, I had to scurry home and access that repository of scholarly knowledge, Wikipedia, to discover why this book might exert a fascination on an artist whose work has focused on Buddhist notions of the universe in its wholeness. Here is what I discovered:


In 27 short chapters, arranged in a 3 × 3 × 3 pattern, the title character makes philosophical observations about the world around him. Calvino shows us a man on a quest to quantify complex phenomena in a search for fundamental truths on the nature of being.
The first section is concerned chiefly with visual experience; the second with anthropological and cultural themes; the third with speculations about larger questions such as the cosmos, time, and infinity. This thematic triad is mirrored in the three subsections of each section, and the three chapters in each subsection.
For example, chapter 1.2.3, "The infinite lawn" ("Il prato infinito") has elements of all three themes, and shows the progress of the book in miniature. It encompasses very detailed observations of the various plants growing in Mr Palomar's lawn, an investigation of the symbolism of the lawn as a marker ofculture versus nature, the problem of categorizing weeds, the problem of the actual extent of the lawn, the problem of how we perceive elements and collections of those elements ... These thoughts and others run seamlessly together, so by the end of the chapter we find Mr Palomar extending his mind far beyond his garden, and contemplating the nature of the universe itself." 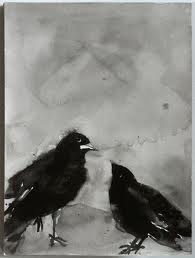 I have to truthfully acknowledge that this description doesn't make me want to read the book. However the ink drawings she completed for the exhibition are very beautiful, exploring a range of aspects of the immediate and banal world - plates of food, items of clothing - and the natural world - birds, animals and again those blades of grass - also the wider expanses of the world and the cosmos. 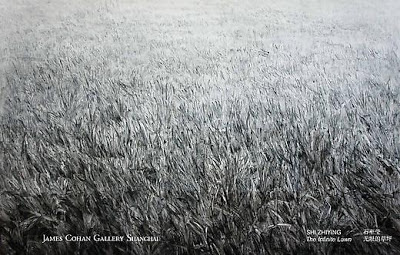 'The Infinite Lawn' was the title Shi Zhiying chose for her major exhibition at the James Cohan Gallery in Shanghai last year, and her focus on painting blades of grass comes into a sharper focus when you know the connection with Calvino. These works took two years to complete. She works slowly and methodically, making many studies and experiments. Anish Kapoor said recently in an interview that "the studio is more like a laboratory than a place of manufacture," and this comment can also apply to painters such as Shi. Her Buddhism continues to influence her painting practice. However when I ask if she sees her painting in some ways as akin to meditation she firmly says no. "Painting is painting". But she adds, "I do it carefully, honestly and truthfully." 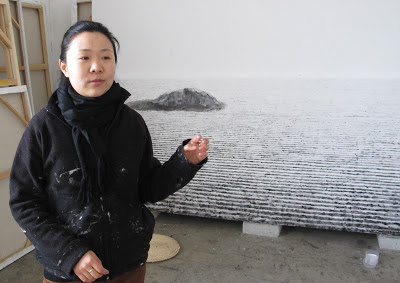 She tells me that although as a child she learned calligraphy and ink painting, she thought of it as something old and irrelevant, but has become much more interested. She recently went to Suzhou to see the work of a master painter and finally feels that she understands it. "I am very happy", she says. 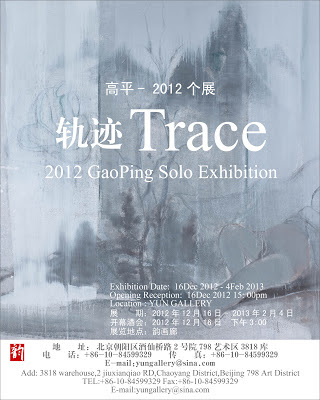 In Shanghai I have also met the American/Chinese artist Monika Lin, and discussed her performance/installation work "On the Way to the Imperial Examination" in which she wrote the character for 'rice' 10,000 times - more about this work in a later post. Wu Meng, and her husband Zhao Chuan, work in a completely different and at times a dangerous way, outside the gallery system and the art marketplace. He runs the social activist theatre group 'Grass Stage Theatre' and she is a performance artist who creates 'interventions' in public spaces, including at Shanghai Expo in a performance in which even the secret police there to observe her became involved in the artwork. The phenomenon of the 'art couple' is one of the very interesting things to emerge from my interviews - it could well be the subject of an entire book!

Posted by An Art Teacher in China at 3:22 PM