On the way from Sydney to Beijing I had 4 days in Hong Kong in which to criss-cross the city (Star Ferry, MTR, red minibuses, trams and taxis, as well as a LOT of walking) visiting artists' studios in Fo Tan, Kennedy Town and on university campuses; and galleries in Central, Chai Wan and other locations. I have been interested for a long time in the way in which contemporary art in Hong Kong differs from that on the Mainland, and the much more limited opportunities that artists there are afforded. In the past some have told me bitterly that they feel they are regarded as insufficiently Chinese to interest collectors. I wondered whether that is changing, after the big Saatchi 'Hong Kong Eye' show and all the hoo-ha about the development of West Kowloon into a massive cultural centre, incuding M+ which will house Uli Sigg's very significant collection of contemporary Chinese art.

On past trips to Hong Kong I have met and interviewed Lam Tung-pang, Hanison Hok-shing Lau, Wong Chung-yu and Carol Lee Mei-kuen - all fascinating artists and all passionate about Hong Kong and its history.


I specifically wanted to meet female artists on this visit as that is the focus of my current project in China. I intended to ask them about their practice, their views on the Hong Kong art scene, and also that thorny question which Chinese artists on the Mainland often find so hard to respond to - "is it harder for women to sustain a successful art career, and if so, why?" Responses I have had in the past to this question vary from a very terse "Of course it's harder, China is still a patriarchal society!" and "There is no feminism in China - it's a western construct" (both responses from very famous artists in their 50s who shall remain nameless for now) to "No, it's easier for me because I don't have to support a family" and "No, it's easier because there is more pressure on men to be successful" (both responses from young - and currently childless - artists in their late 20s and early 30s) to a blank "I don't understand this question." The other day a translator told me in the midst of my interview with an artist that she could not translate the word "feminism" into Chinese. This surprised me a little since both my dictionaries and even Google Translate seem to have no problem with it. I had to say, "But I think you can, actually!", and then give her a rather long-winded explanation.

Hong Kong is a very different place however, and I was fascinated to discover the highly sophisticated and aware understandings of contemporary critical theory and art practice in the work of 4 very different artists. Here is the start of my article about those recent encounters, published today on theculturetrip.com I have added a few additional images to this post. 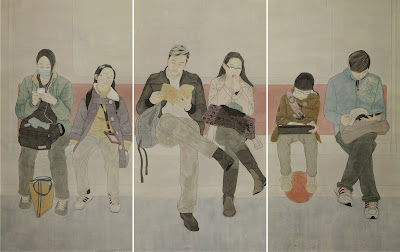 When people talk about contemporary Chinese art they are invariably referring to art from Mainland China. Despite recent international exhibitions, even in Hong Kong itself few people seem to be aware of the interesting contemporary art being produced there. Initially it can seem less dramatic, less extraordinary, than the work produced by artists trained in the powerhouse PRC art schools such as Beijing’s Central Academy of Fine Arts. However, on closer inspection the fascinating subtleties of a liminal place with a complex postcolonial identity emerge. Hong Kong has been something of a transit zone since the days of the Treaty Ports and the British seizure of its harbour at the end of the first Opium War in 1842. Its unique history results in contemporary art quite unlike the current shape of art from China’s mainland.
Some facts about contemporary art in Hong Kong:

- More than 60,000 people attended the inaugural Art Basel Hong Kong Art Fair in May this year. And more than half of the participating galleries came from the Asia Pacific region.
- 7,000 people visited Song Dong’s exhibition in 3 weeks during January this year.
- Major international galleries such as Gagosian and White Cube now have a Hong Kong presence, as do Edouard Malingue, Pékin Fine Arts and Pearl Lam.
- The West Kowloon Cultural District when complete will comprise 17 arts and cultural venues.
- Hong Kong is now the world’s third largest art market by auction sales.

Clearly, there is a hunger to see contemporary art. But what does it mean for Hong Kong artists? There is a sense that artists who live and work there are the 'poor relations' of the art stars from Beijing. Despite recent exhibitions such as Saatchi Gallery’s Hong Kong Eyewhich featured the work of 18 artists never before shown outside Hong Kong, it is still difficult for local artists to find gallery representation, partly due to prohibitively huge gallery rents.Liminal, at K11 Art Mall by young artists Kenny Wong and Marco de Mutiis conveys the anxieties so evident in Hong Kong - lack of space, the pressure of sky-rocketing rents, anxieties about cultural identity, and 'big brother' watching from just across the border – through the metaphor of computer operated ‘drones’ equipped with video cameras observing and recording unaware passers-by outside the gallery. The Hong Kong Contemporary Art Awards also reveal a rich diversity of practice. The fact that so many artists in Hong Kong see their work as a form of social activism is often unacknowledged: they are engaged with their city and its myriad concerns in a way which distinguishes their work from other artistic centres. Artist Annie Lai-Kuen Wan says, 'For me the social issues are overwhelming.' Ivy Kin-chu Ma’s work ‘Cambodia / Tuol Sleng Genocide Museum / Numbers Standing Still’ exemplifies this seriousness of purpose. A series of ghostly sepia numbered tags suggestive of labels attached to a person’s clothing are arranged according to the Fibonacci sequence, bearing marks of erasure and over-drawing on the archival prints.
To find out more, I spoke with four very different artists in Hong Kong. They all happen to be female. In an art world which is still somewhat testosterone-fuelled this is just one more factor to add to the difficulties experienced by local artists in a place which tends to look beyond, rather than within, its own borders.
Sculptor and installation artist Phoebe Man works with materials some would see as not only unorthodox but confronting. Most notoriously these have included sanitary napkins and fingernail clippings. She engages her audience in participatory works, blurring the boundaries between artist and viewer. Man has made works which could be viewed as overtly feminist, dealing with sexual assault and violence against women; and is planning a piece in Taiwanin which she will work with the remaining WWII ‘comfort women’. She sees these now very elderly survivors as extraordinarily brave for bringing what was once a shameful secret into the light of day.

Annie Lai-Kuen Wan works in highly unconventional ways to reflect on the changing nature of her city. Often using moulds, as a way of 'mapping reality', she examines our relationship to the material world and its meanings. Her work ‘Looking for Poetry in Wan Chai’ recorded the fabulous tapestry of text in the oldest parts of Hong Kong, a visual landscape of signage that is under threat from development. Currently showing in the Hong Kong Art Museum, ‘Crafting a Reverse Scenario for a Lost Sheep’ is an investigation of time’s actions on organic substances. Ceramic sheep figurines are sealed in glass containers, together with wet clay and bean sprouts, creating enclosed micro eco-systems, surreal landscapes of growth and decay in miniature.
Monti Wai-Yi Lai works with materials found in the natural environment, in particular with pigments she creates from ground leaves, once again reflecting on Hong Kong’s very particular social and environmental issues. Lai uses the traditional tile patterns found on post-war Hong Kong apartment blocks as an organising principle and key design element in her ephemeral, often participatory, site-specific works. She wants to make works in which her own memory of growing up in a semi-rural area of Hong Kong, now rapidly submerged in the urban megalopolis, connects with significant issues both local and global. She thinks that an authentically Hong Kong voice is increasingly being heard. 'Artists and audiences are looking for that!' she says.
Celia Ko, a painter trained in the conventions of academic realism, adapts Baroque and Renaissance conventions and iconography to create highly theatrical staged images. She reflects on the relationships between her protagonists and their contemporary lives, as well as on her own history and cultural identity. Some works focus on her grandparents and the significance of family in traditional Chinese culture; others on the complex hybrid identities and relationships which emerge in the contemporary city.
To read on, and find out more about each artist and her practice, click HERE
Posted by An Art Teacher in China at 4:05 AM