北京日记 Beijing Diary: Ten Things I Love About Beijing (and a few that I don't) 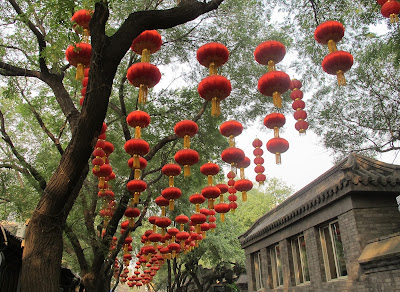 Ten things I love about Beijing - even apart from the art!

1. The kindness of strangers. When I smile at people they invariably smile back, and often stop for a chat in a weird mix of mime and Chinese. I suspect people are talking to me in a kind of pidgin baby talk when they realise that my communication skills are pretty limited, but I don't care if they are having a laugh at my expense as it is all so good-humoured. People go out of their way to be helpful, chasing after me with change, showing me where I am on a map (which it sometimes turns out I am holding upside-down) making sure I understand the special deal in the supermarket (so I now have 2 dozen eggs even though I only wanted 6!) and generally being kind. I notice otherwise insanely aggressive drivers stop for old people crossing the road (well, OK, only sometimes!) and there is much public affection for children. 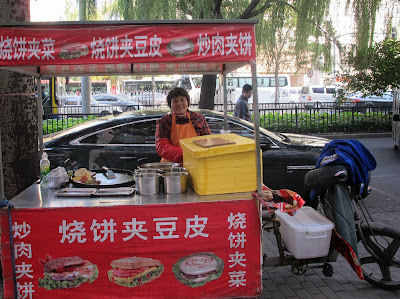 2. Public singing. Often as people ride their bicycles or scooters past me they leave a trail of music behind them. I love the unselfconscious way that people sing loudly to themselves as they walk or ride through the streets or round the park. Despite the rather unnerving way in which Xi Jinping is making public statements about a return to 'Mao Zedong thought' I also can't help enjoying the public singing of revolutionary songs in the local park each morning. These are people singing the songs of their youth, and remembering a time which many thought was much simpler than the present day. 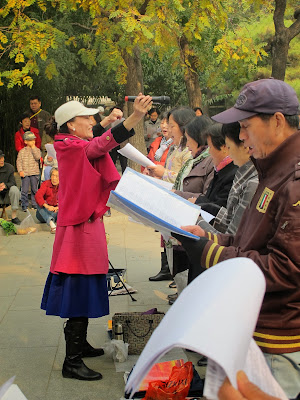 3. Food! No need to say more - chuan'r, baozi, jiaozi, noodles, beautiful tiny mandarins from the markets, chestnuts, peanuts with Sichuan pepper and chilli, cakes filled with sesame paste - it's all good! But I am avoiding the following menu items: Donkey sandwich, Pig intestines in soup, vanilla chicken (God knows!) and the mysterious and terrible-sounding "pale baby soup". At least for now. Even the multinational chains have an intriguingly local flavour - the 24-hour KFC on my street serves congee for breakfast (or so I am told), and Pacific Coffee sells red bean cheese-cake and osmanthus flower cake. 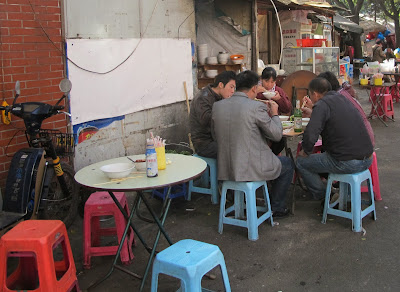 4. Beijing babies. Swaddled in so many layers of clothes, they are like little fat Buddhas. Babies are everywhere, usually being doted on by both parents and at least one grandparent. I have lots of smiling encounters with grandparents - in the street, in the park, at the shops, in the subway. 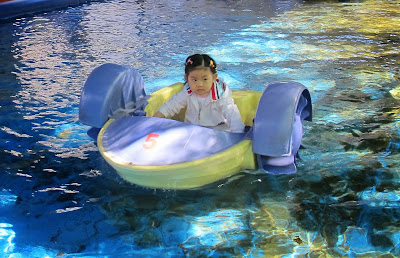 5. The Beijing accent. Everybody talks like a pirate! I am learning to make sure I say "Sanlitun'r" instead of Sanlitun. Taxi drivers keep kindly telling me my Chinese tones are good, which makes me happy, but then if the conversation continues I am forced to reveal how small my vocabulary is, and how bad my grammar. Shame. But I persevere. One day I am determined to have "yi kou liuli de hanyu" (literally: a mouth of fluent Chinese.) I may be 150 years old before that day comes, however. 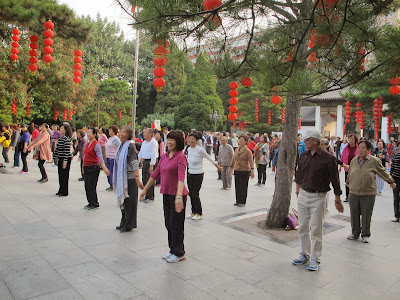 7. Beijing taxis. They are cheap, they are everywhere, and sometimes the pushing and shoving in the subway just cannot be borne! I would like people to stop complaining about Beijing taxis. The drivers work REALLY long hours and very rarely try to cheat you. Some of them are mercifully silent and others are natural comedians. A driver the other day punctuated his swearing at the traffic with teaching me new words - many are self-appointed language teachers. I was dutifully repeating the things he said until I inadvertently repeated one of the names he had just called a guy riding a 'san lun che' who had cut in front of us. He gasped in shock, swerved the car momentarily onto the wrong side of the road (not that unusual, but terrifying nonetheless) and made me promise never, never, never to say that word again. So now I am too scared to look it up and find out what terrible thing I cluelessly uttered! Taxi drivers often want to tell me things about Australia, which I sometimes understand and at other times I have no clue. My tactic is to smile a lot and pretty much agree with everything, which seems to work OK in most situations - although it occasionally backfires when ordering in restaurants.

8. Late Autumn Weather. Most especially those rare and wonderful blue sky days when the air is not choked with smog. You walk around feeling cheerful all day and thankful to be alive in such an exciting city. 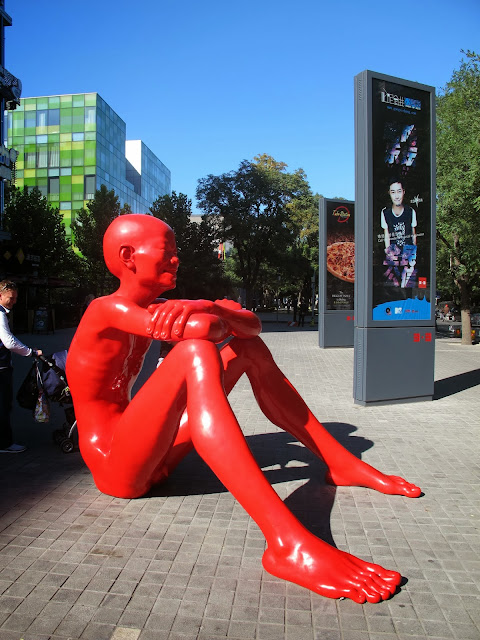 9. Hutong architecture. I hope that the government is belatedly realising that this absolutely unique and incredibly beautiful form of urban design is worth preserving. And I mean preserving in an authentic way rather than the Disneyfied versions that sprang up before the Olympics, after whole neighbourhoods had been razed. However, one must be wary of romantic Orientalism - people also need reliable electricity, running water, and internal private bathrooms. The thought of living through a Beijing winter and having to use a public bathroom is a truly dreadful one - an indication that true Beijingers are a really tough breed. 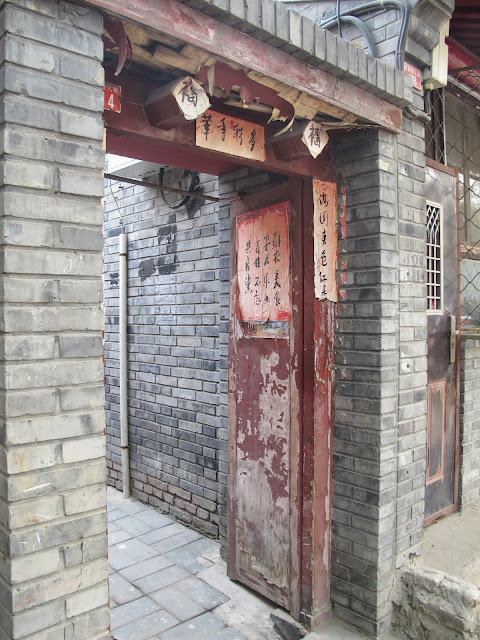 10. The constant surprises. To follow the sound of music at 9 o'clock at night, enter the park and find more than a hundred people dancing in the dark to recorded disco music. To come upon the water calligraphers still absorbed in brushing their beautiful characters onto the pavement at dusk. To round a corner in the park and find a man taking his songbirds in their cages for a turn around the lake. The other morning I came out of the gate of my lane onto the street and found all the young real estate agents lined up outside their office with their hands on their hearts while the national anthem was played. This was quite a sight - especially as they are usually fully occupied with lying across their motorscooters playing games on their phones, playfully pushing and shoving each other and combing their hair. One in particular is always picking his nose when I walk past. I'm tempted to give him some tissues.

11. The art. Of course, the art. OK I lied about ten things - here is number 11. One of the  things I most love is the art here. And I could have definitely put it at Number 1. It is unlike anywhere else on the planet. Beijing really feels like the beating heart of the artworld. In a place where even the smallest artists' 'village' contains hundreds of studios with artists working away in every possible form, the excitement is palpable. Not all of it is good, or interesting, of course, but there is such incredible volume of production that in any visit to the galleries of 798 or Caochangdi one is sure to find things that will amaze and delight. I am here to meet artists for 2 months - in 2 years I would not be able to see everything I want to see in just this one Chinese art  centre, to say nothing of Shanghai, Chongqing, Hangzhou and other art centres. And the new graduates pour out of the Central Academy of Fine Arts each year. A group of CAFA students attended the Redgate Open Studios event this week, at which I gave a talk about my research, and crowded around me to ask questions and tell me their ideas about what is driving the youngest generation of contemporary artists. So earnest, so passionate, and so interesting!


And some things NOT to love:

Air pollution. Enough said. Public spitting. This really is horrible.
Even more disturbing though, is the sense of a place which may lose its heart and soul unless there is a collective will to reconsider the social cost of the 'to get rich is glorious' ethos. While it is unquestionably admirable that China has lifted so many of its population out of poverty (so much so that according to Forbes Chinese Mass Affluent Group Report 93 million Chinese households are expected to join the ranks of the middle class) there is much public angst about whether China has lost its moral compass. The pace of change has been extraordinary. As recently as 2000, only 4 percent of urban households in China were middle class; by 2012, that share had soared to over two-thirds.  ( the diplomat.com )

In a review of the immensely popular movie 'Tiny Times', Sheila Melvin says,

" Since the Cultural Revolution ended and the era of opening and reform began, the Chinese government has preached the gospel of materialism.  The Deng-era slogans “To get rich is glorious,” “Development is the irrefutable argument,” and “It doesn’t matter if the cat is black or white as long as it catches the mouse” have been thoroughly absorbed.  Wealth-generation has become virtually the sole measure of success – for the nation, provinces, localities, leaders, and individuals. It thus comes as little surprise that a movie in which young people are obsessed with luxury goods and opt for money over love and in which parents will do anything to see their child marry rich – a mother in “Tiny Times’ tells her son’s girlfriend, “Our family is not open to the lowly poor like you!” – should be popular with young people.

On the contrary, it looks like a true reflection of contemporary society in which conspicuous consumption is often the dominant ethos; those who vocally advocate an alternative path – of religious faith or opposing politics – do so at their own risk; and the elite inhabit a parallel universe of privilege that, on those occasions when it is exposed (as following a sports car accident, a corruption trial, or a gang rape) makes the wealth-flaunting in “Tiny Times” seem truly tiny.  A rethinking of official rhetoric is already underway and I, for one – while recognizing the need for continued growth – hope that the new “Chinese dream” will encompass goals other than getting rich at any cost." (Best of Times or Worst of Times) 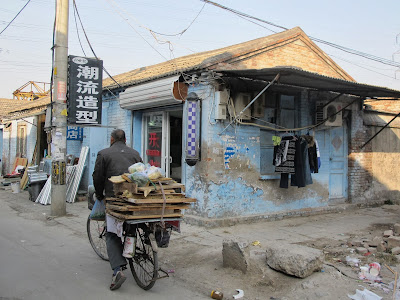 When you walk down a lane filled with family washing drying in the dusty air, with people eating noodles sitting on plastic stools, and then you round the corner and find a Lamborghini show-room, and boutiques selling Versace and Prada, the juxtapositions are breathtaking. And while this is partly what makes Beijing so fascinating for the visitor, it is also an indication of the dizzying speed of change and the resultant inequality. A potent mixture of influences, economic factors and social policies, this is causing considerable anxiety here. Two years ago there was much discussion about a return to Confucian values. Today the line is about returning to the core values of the Communist Party. I suspect that none of this means a huge amount to those young real estate agents at my gate, with their cheap suits and their expensive mobile phones. Once Pandora's box has been opened.....

Posted by An Art Teacher in China at 4:57 PM