This post is an edited and expanded version of a piece I wrote about Gao Ping last year, published as part of a longer article on The Culture Trip.

“I knew nothing but shadows and I thought them to be real.”

I first spoke with artist Gao Ping in 2012, when she arrived in Sydney for shows of her work at Stella Downer Fine Art and at the Maitland Regional Gallery. She told me that for Chinese artists the traditions of ink painting are “like the ground under your feet”. In December last year when we spoke at greater length in her Beijing studio, she expanded on this idea, telling me of her admiration for the painter Ba Da of the early Qing Dynasty, adept at creating visual metaphors, who famously observed that there were “more tears than ink” in his paintings. His expressive landscapes achieve a balance between stillness, space and closely observed detail, which Gao Ping returns to again and again. She finds his work both sad and “calm in heart”, a description which could equally be applied to her own work, and especially to her drawings. In these works, created with traditional inks on silk or rice paper, tiny lonely figures or objects float in a vast empty space, creating a dynamic relationship between the forms themselves and the space they inhabit. Her deep knowledge and understanding of traditional painting is evident in the ‘rightness’ of her placement and the confidence of her mark-making. She says that tiny things are sometimes more important than the large and obvious, and her work creates an ongoing narrative grounded in her idiosyncratic observations of people, places and events. The life of an artist in Beijing is a lonely one, she says, and she believes that painting is like a secret language, creating mysterious layers that reveal themselves slowly to those willing to take the time to look carefully. Reticent and not keen to talk much about herself or about the meanings of her work, she says, “What I want to say is in the paintings.”

Ink paintings of tiny female figures, some nude, some clothed, perhaps represent a kind of self-portrait, an exploration of loneliness. Still Life – Girls contains 4 minute figures: an overtly sexy one in black stockings, an exhausted one slumped flat on her back, and two who turn away from the viewer. Their outlines are softly blurred. They are touching and whimsical, as are her representations of lonely toys, battered teddy bears and stuffed animals, pot plants, electric fans, figures seated on park benches, slightly shabby gardens and simple houses like those around the courtyard where she and her husband work intently in separate studio spaces, heated by a wood burning stove. These works express fragility and vulnerability. They evoke memories of childhood, as well as her astute observations of the world around her and her responses to it. “The drawing is in my heart,” she says.

In contrast, her oil and acrylic paintings, some large and powerful and others on smaller square canvases, are at once strong and lyrical, often employing a subtle grisaille in which translucent washes are layered to create great depth. She began to experiment with introducing washes of colour underneath her palette of greys after looking closely at the work of Marlene Dumas, an artist she much admires. These painterly works evoke ambiguous landscapes which to the artist represent an ideal world, a place of harmony and retreat from the chaos of the city. Gao Ping is a quiet observer of contemporary urban life, and much of her work speaks of her distress at the pace of change in Beijing, and the constant and unsettling transformation of familiar places in a never-ending process of demolition and urban renewal. She is creating a different, calmer world in her paintings.
When we met once again last week at her Beijing studio, she showed me the acrylic-on-paper works for her new show at Yun Gallery, in the 798 Art District here, as well as more of the beautiful ink works mounted on silk in the traditional manner, which she has just recently shown in Perth at Seva Frangos Art 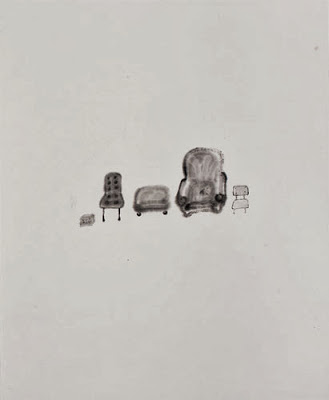 In a long conversation punctuated by many tiny cups of tea Gao Ping told me that she often walks after nightfall in Ditan Park (Temple of Earth Park), observing the natural and architectural forms which loom out of the darkness and the shadowy forms of people. Like every park in Beijing it is still busily populated by dancers, walkers and water calligraphers long after sunset, and the artist enjoys the experience of encountering others in the vast spaces.These quiet experiences in the midst of a chaotically busy city inform her work, the images staying in her memory in an almost photographic manner, as she experiments with ink, sometimes mixed with gesso and water, drawing freely and quickly onto large sheets of heavy paper. The first mark is the hardest, she says, but after that it flows almost effortlessly. This is a process quite unlike the meticulousness of traditional ink painting, which may look spontaneous but in fact is utterly controlled and deliberate. In these new works some of the most interesting surface qualities and marks have been arrived at through experimentation and unorthodox combinations of materials.

Posted by An Art Teacher in China at 6:24 PM