你吃了吗？ Have you eaten? Best and Worst Food Moments in China 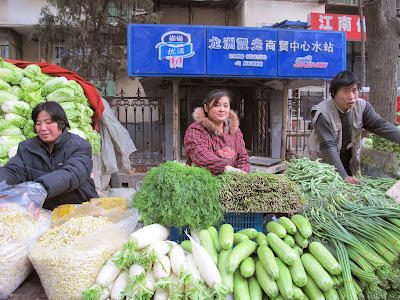 As this seems to be the time of year when every newspaper, magazine, journal, website and blog descends into 'best-of' list territory, why should I resist? And as my brain is addled by the general craziness and mild panic of this festive season with its worries over whether the oven is big enough to hold the turkey (or, in the case of my planned meal, enormous hunks of lamb to roast slowly for hours on a day that I hope will not hit the 40 degree mark of Australian Christmases past) what better list than one involving food? Food in China, to be precise. In a culture where it is not uncommon for people to greet each other with "你吃了吗？ Have you eaten?" it is evident that food is taken very seriously. Go out to a restaurant with Chinese friends and you find the perusal of the menu is not taken lightly, often involving a debate about the merits or otherwise of particular dishes.To the point of tedium, sometimes, or to the point where I begin to think that I will be willing to eat the boiled frogs, the donkey pastrami, or frankly ANYTHING AT ALL.

In my first 2 weeks in Beijing, while I found my feet and learned to navigate the city from my base in Tuanjiehu, I was restricted to what I could buy in my local supermarket, or in the streets of the neighbourhood. Breakfasts for a while consisted of 'Bimbo' brand bread (awful!) with marmalade or 'Skippy' brand peanut butter (also awful) with black Nescafe. At first I couldn't find anywhere to buy milk, butter, real coffee or decent bread. The moment, 2 weeks into my 2 month residency, when I found a lone packet of Lavazza coffee on a hidden shelf of the Jinkelong Supermarket was a very joyful one. I embarrassed myself by loudly exclaiming "Yes! Thank God!" Locals doing their shopping stared for a moment, then put it down to the general weirdness of foreigners. One memorable dinner was intended to be Pasta Napoletana, until I discovered (after I had sauteed onion and garlic) that my apartment had no can opener to open the tinned tomatoes. And then I boiled the pasta and found I couldn't turn the gas off, or relight it. I struggled in a quiet sweaty panic for 20 long minutes with all the windows open and gas leaking into the kitchen, then ate cold spaghetti with onion and garlic. Yum.

But I soon enough discovered that in today's Beijing you can get pretty much anything you want - although I never did find Vegemite, that Australian staple that people from anywhere except the Antipodes think is like eating axle grease. And, of course, eating local foods - even moving right outside your comfort zone of language and food experiences - is all part of the adventure. I came to love the local markets and snack stalls, as well as all the many different restaurants - northern Chinese, Uighur, Cantonese, Sichuan, Japanese (controversial, this one!) and Shanghainese - in my immediate surroundings. A little further afield, just across the 3rd Ring Road, I could find Mexican, Italian, Thai, or rather the Chinese-infused versions of these cuisines. And watching people at the noodle stands stretching the noodles ever thinner between outstretched arms, and whirling them about over their heads as if in some kind of strange Olympic event like ribbon twirling gymnastics, never fails to fascinate. 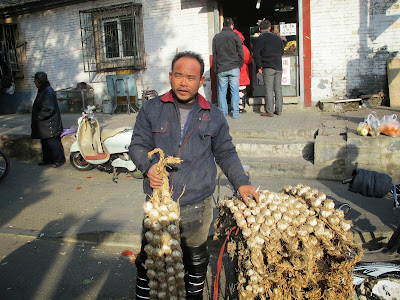 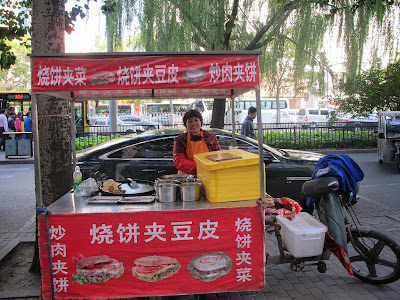 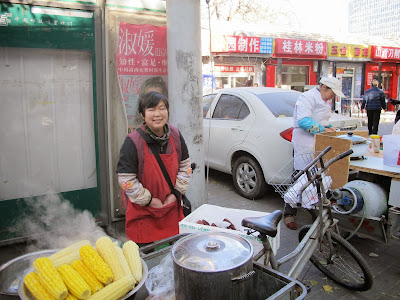 Having returned to Sydney (summer mangoes, peaches, cherries, salads - ah, so good after 3 months away!) I herewith present a list of my own personal top ten food-related experiences in China. The sublime to the ridiculous, the (relatively) expensive to the ridiculously cheap. So, in no particular order. 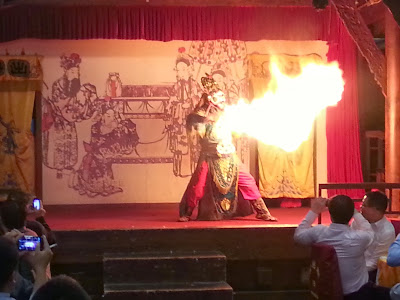 6. A tiny local restaurant in Xi'an where I ate fabulous dumplings filled with lotus, fennel and spinach with my translator 'Rocky' and his young female friend who drove us around the city in her brand new car. She had just got her licence, so the drive was somewhat nerve-wracking. Rocky didn't hold back with the driving advice either - despite not having a car or a licence himself. And also in Xi'an, the Xinjian flat bread sold in the Muslim Quarter, cooked by sticking round discs of dough on the inside curved surface of a metal drum over a fire. Flavoured with fennel seeds and salt, they are chewy and delicious, best eaten hot straight from the oven. 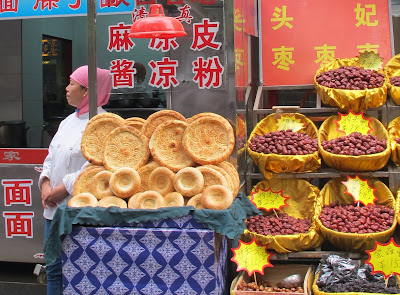 7. Lunch at the bizarre 'French' chateau and winery 2 hours outside of Xi'an, where I ate with a property developer, two Xi'an artists, a Chinese movie producer and 'consultant' who had spent 25 years in Hollywood, and my translator 'Rocky'. The purpose of this meal remained mysterious, and the location was, frankly, bizarre, but the food was fabulous. Local produce, beautiful fresh flavours, and every time I thought the meal must have ended, more dishes were brought to the table. We finished with beautiful noodle soup, and much toasting with bai jiu and very strange red wine. Gan Bei! You can read more details of my trip to Xi'an here: Beijing Diary: Suddenness Happens

8. The tiny noodle and baozi stand right near a friend's apartment in the back lanes of Tuanjiehu. Really good hand-shaved noodles made from scratch in a bowl of broth for 5 kuai (that's less than a dollar.)

9. Din Tai Fung. Always good, every time, in every city, despite being ludicrously expensive by Chinese standards. Love those Xiao Long Bao, shrimp and pork wontons, and black sesame buns.

10. The duck restaurant, Jing Yaa Tang, in The Opposite House Hotel in Beijing. In an interesting building designed by Japanese architect Kengo Kuma, the hotel is filled with contemporary art and the interior spaces are very beautiful and restful in a sparse way intended to reference traditional Chinese simplicity. New, and strangely empty on the night that I visited with friends, the food was beautiful, as was the design of the restaurant. I have never been a big fan of duck before, but this was a revelation. As were the noodles in a tiny space called The Noodle Bar in the 1949 Hidden City, which is a serene space of courtyards, gardens, restaurants and bars behind the crazy traffic of the 3rd Ring and Gongti Bei Lu. You sit at a three-sided counter (there is space for a dozen patrons at a time, at most) and watch the chefs making the noodles from scratch. And those noodles - oh my God! So good!

And my least favourite food moments? 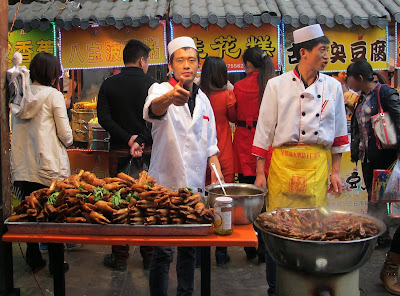 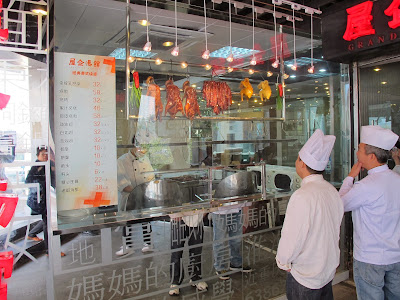 Posted by An Art Teacher in China at 8:48 PM