I have just returned to Sydney from Hong Kong, and as I walked through the Tsim Sha Tsui subway to catch the MTR last week, I remembered my passage through the same pink-tiled subway in April 2011, when I found it lined with stencils asking, rhetorically and unnecessarily, "Who's Afraid of Ai Weiwei?" I think we knew the answer to that question. Later that same day, as I returned to Kowloon, I found police and station workers taping pieces of paper over the stencils, all the while being filmed by people using their mobile phones. Later still, artist activists cleverly projected the same images onto the glass facades of the skyscrapers lining the waterfront, from boats in Victoria Harbour at night. A lot has happened since that time, in China and the world, and Ai Weiwei was released, but he is still unable to travel and is subject to constant surveillance.

His retrosepective show, 'So Sorry' at the Munich Haus der Kunst in 2009 - 2010 featured the work 'Remembering' on the facade of the museum. Nine thousand children's backpacks spelled out the words of a grieving mother who lost her child in the Sichuan earthquake, 'She lived happily in this world for 7 years'. It would seem that Ai's stubborn insistence on investigating the deaths of these victims and attempting to force the government to name each and every one of them was something of a turning point in his art practice. It becomes imbued with a deeper seriousness from that point, and with a sense that the stakes are high, that certain things really matter. The title of the show was a pointed dig at the insincere apologies offered by officials when disasters occur, whilst burying the facts and preventing any public accountability. Certainly not something restricted to China, one must acknowledge. Ai suggests that they are, in fact, never truly 'sorry', and also that he himself remains utterly unrepentant about his continuing campaign, using his documentary films, his artworks, his international stature and the power of social media to attempt to force a reluctant bureaucracy to open itself to greater scrutiny.

'Never Sorry' is  the title of Alison Klayman's doco about Ai Weiwei, which I saw in a packed cinema at its Sydney Film Festival showing in 2012. The film is fascinating, and Klayman has created a successful narrative arc in editing a huge mass of material filmed over a number of years,  recording the artist in both his private and public personae. One cannot avoid some doubts throughout about how much is performance art from this very savvy operator and how much is 'reality'. The domestic detail is engaging: his elderly mother nags him about eating too much mung bean ice cream, and his little son follows him around his Caochangdi courtyard, feeding him pieces of melon. Food features in many scenes in the movie, including one where Ai and his followers are eating at an outdoor restaurant in Chengdu, enjoying a Sichuan speciality of pigs' trotters, when a crowd begins to gather, apparently summoned by Twitter. The police arrive, and turn out to be rather confused and hapless figures in crumpled, ill-fitting uniforms rather than the bully boys one had been led to expect, and keep asking when he will be finished eating. The absurdity of this scene is interspersed with interviews with fellow artists and activists, and with footage of Ai and his supporters filming the police, who are filming them. 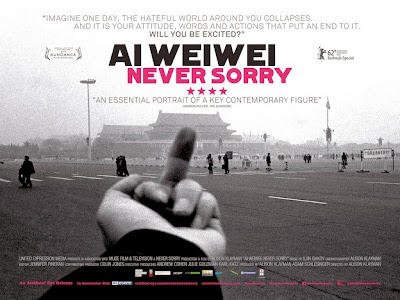 Klayman began the film in 2009 at the point where Ai began his campaign (or, perhaps, more accurately, attached his clout to the campaign) to name all the victims of the Sichuan earthquake. Many of these  deaths were attributed to corruption and shoddy 'tofu' construction, most especially of government schools, so the investigation set the artist on a collision course with the keepers of official secrets.

The aspect of the film which interested me the most was Ai's obsessive use of Twitter to document every aspect of his encounters with bureaucracy. His art and political campaigns for greater openness and democracy have  become inextricably enmeshed, and it might be suggested that in a post-Beuys, post-Warhol world his life has become one long performance piece. The absurdity of the now constant surveillance which has surrounded him since his release from detention is highlighted with his own self-surveillance, his marble sculptures of surveillance cameras, his (foiled) attempt at a 24/7 'ai weiwei cam', and his  invitation to the guards outside his studio to come inside and join him - he made them an offer to become his studio assistants.

However for me the most memorable sections of the film are those dealing with the past - the humiliation and banishment visited upon his father, the famous poet Ai Qing, during the Cultural Revolution has obviously had a profound impact on the son - and with the aftermath of the Sichuan Earthquake and the campaign to name every victim in the face of government secrecy. The creation of a memorial wall in Ai's studio with the name and birthdate of every victim of the earthquake listed on endless sheets of paper is a testament to the sheer perseverance and indefatigable energy of the artist and his followers. He organised a project in which these names were read out by volunteers,  recorded on their phones and then uploaded. Listening to this litany of names, and knowing that so many of the victims were the child owners of the little backpacks and exercise books that we had seen strewn amongst the rubble in the earthquake news footage, was almost unbearably sad.

Even here in Sydney, much less in China, opinions about Ai Weiwei are polarised, with some dismissing him as a relentless self-promoter. I must say that I am dubious about the western tendency towards hagiography, and the over simplification of all the complexities of contemporary China. His time in New York in the 80s, working in his studio in PS1 (and gambling in Atlantic City!) and his consequent epiphanies about the significance of Duchamp and Warhol, might go some way towards explaining his 'life as performance'. Eminent art critic Jonathan Jones believes that Ai is the Duchamp or Beuys of our time. Sometimes (as with the 2013 installation of baby formula cans in Hong Kong in the shape of a map of China) the art suffers at the expense of a very simple polemic. At other times, as with the installation of straightened rebar, taken from the collapsed buildings of the Sichuan earthquake zone and simply titled 'Straight' at the last Venice Biennale, or the increasingly complex and beautiful installations of 'Forever Bicycles', the work has a greater power. His real significance cannot yet be known, perhaps, but he has made people think that art actually matters, and for that we should all be grateful.
Posted by An Art Teacher in China at 1:37 AM