I have discovered a sinister and hitherto little known (at least to me) connection between writing and obesity. As I enter the final dark days of editing, wrestling my unwieldy and intractable beast of a book into submission in the attempt to create a leaner, meaner version ready for print and publication by October, any pretence of a commitment to fitness and exercise has flown right out the window. Writing in the early mornings before work, in the late afternoons as soon as I get home, and late into the night, carving out chunks of time on weekends, and lying awake thinking about it in the middle of the night, whilst also continuing to worry about my students and take home vast piles of marking has taken its toll. By this point it has resulted in a state of physical torpor so marked that my gym has now stopped sending me those annoying emails that begin cheerily, 'Luise, we haven't seen you for x weeks!' Am I feeling guilty? Of course. There's a direct correlation between the length of my book and the size of my arse. And now, as my book gets leaner, I seem to be getting larger.

There should surely be websites dedicated to this - maybe useful K-Tel products could be advertised on weird late night TV channels. Perhaps a treadmill which you could operate whilst typing might be the go. I tell myself - every week - that this week will be different. I will walk each morning at sunrise, I will go to the gym, I will go to all those yoga classes I've paid for already. I will not eat chocolate (ha ha) and I will not drink wine (ba ha ha!) And my final vain resolution, every single week, is that I will do an hour of Chinese study every day. Sad to admit, none of this has happened. But there is light at the end of the rainbow and a silver lining at the end of the tunnel. (Which, come to think of it, could well be a Chinese maxim.) Each day is a new beginning and the East is red.....

There is also the fact that the solitary occupation of writing has to be balanced with all the competing demands of daily life. When I read all those stories of male writers who shut themselves away in their studies and emerged only for meals that had been cooked and served by women, I used to think, 'Those bastards!' Now, I think, 'Those lucky bastards...' I am looking for inspiration in other stories of women like PD James who rose before the sun every morning and completed a few hours of writing before going to her job as a senior civil servant. Or Mary Wesley, whose first book was published after she was 70. It did, after all, take me until I was 58 before I had that all important "room of one's own."

The book will, I suppose, eventually, be finished. Afterwards I will return to China, study Chinese each day while I am in Beijing, and embark on a project for a whole new adventure that begins at the end of September. I am looking forward to my encounters with artists such as Li Hongbo, Xu Zhen, Lu Xinjian and Wang Qingsong, and to broadening my field of research. I will travel to Chengdu to visit some artists' studios, and return to Hangzhou, where I was able to spend only one day with Wang Zhibo last December. My experience of China is so limited, and I want to see cities other than Beijing and Shanghai, wonderful though they are.
Many of the artists included in my book have recently shown new work in China and internationally, or are about to do so: Cao Fei at Hong Kong Art Basel and the Venice Biennale, He Chengyao and Tao Aimin at the International Expo in Milan, Cui Xiuwen's second solo show at Klein Sun Gallery in New York, and Liu Shiyuan at Whitespace in Beijing, just for starters. Yin Xiuzhen's 'City Suitcases' and the feminist 'Badges' that Lin Tianmiao explained to me when we met in 2013 are in an important exhibition, opening later this month, of works from the Gene and Brian Sherman Contemporary Asian Art Collection at the Art Gallery of New South Wales, 'Go East'. This promises to be intriguing. As Ai Weiwei said, 'Everything is art, everything is politics,' and with works from Dinh Q. Le, Alfredo and Isabel Aquilizan, Song Dong, Zhang Huan and Yang Fudong, among others, this will be an exhibition not to be missed, of works by artists who engage with the most significant issues of our time. So while I am sad to miss the exhibition of Xu Zhen and his Madein Company at the Long Museum in Shanghai (a visitor to his studio recently described it as 'like Andy Warhol's Factory, but with less sex and drugs') and I can only sigh over the impossible dream of getting to the Venice Biennale, I can at least console myself with the knowledge that Chinese contemporary art is now everywhere, and Sydney is no exception.
In the meantime, I am enjoying working with my students on their own writing about contemporary artists ranging from Ai Weiwei and Xu Bing to He Xiangyu, Ah Xian and Shen Shaomin. They continue to surprise me with their thoughtful interpretations and their interest in the ways in which contemporary artists can embed meaning into their choices of materials. Most recently they have been writing interpretations of Ai Weiwei's latest installations on Alcatraz Island, particularly 'Blossom', the installation of white porcelain flowers with which he has filled the tubs, toilets and washbasins of the abandoned psychiatric hospital wing. Now they can talk knowledgeably about Mao's cruelly deceptive 'Let 100 Flowers Bloom and 100 Schools of Thought Contend' policy of the 1950s, no mean feat for Australian kids who could not tell you anything at all about China and its history only one short year ago.

Even the little ones in Year 7 have done some writing about Cai Guo-Qiang's beautiful circle of animals around a waterhole, 'Heritage', and Year 8 are writing imaginary wall texts for an exhibition of Gao Rong's fake designer handbags embroidered with stains and filled with unlikely embroidered objects, ranging from a sausage to a giant oozing tube of toothpaste; from a packet of laundry powder to builders' tools. I will be intrigued to see what they make of this work, entitled 'Guangzhou Station' and shown at the Moscow Biennale in 2013. 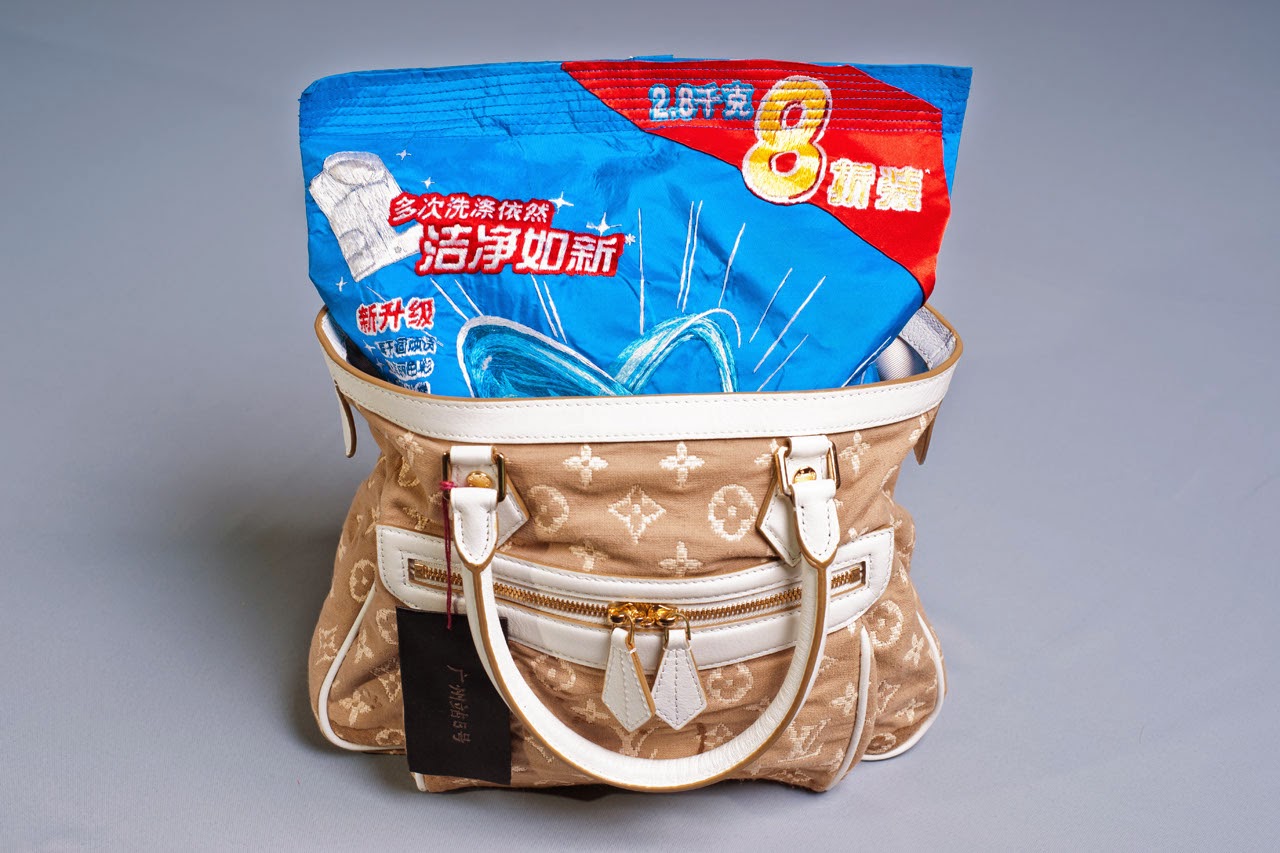 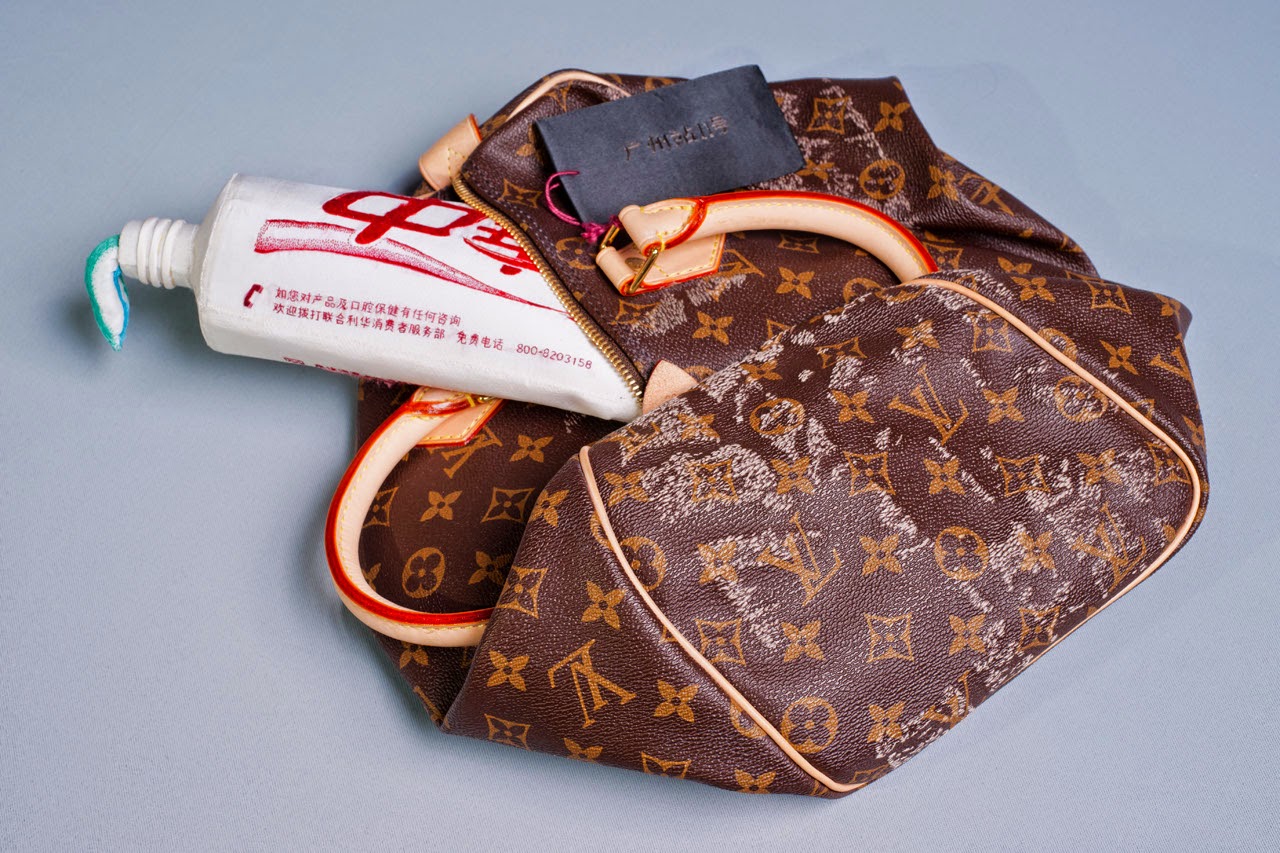 'Half the Sky: Conversations with Contemporary Women Artists in China' will be published by Piper Press in October 2015.

Posted by An Art Teacher in China at 5:04 AM